I've installed all the Google API and Google Service library relative to SDK 4.1 with the SDK Manager.
But the error is still displayed .

i don't know this error, but maybe this is mentioned: 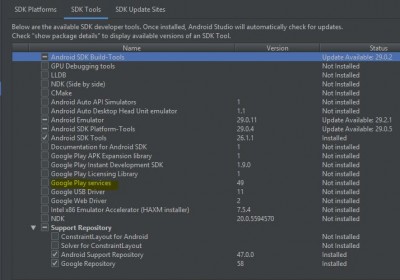 I'm not at my dev-pc so can't tell exactly.

Is there something special what you've added?

What is the Android version of the S7?
Top

Hi sphere, and thnaks for your help.
I've already checked this line but no effect.
The S7 SDK version is 8.

As far as i know the line should not matter, just to rule something out.

Can you post a screenshot of the error? So we can see the exact message.

ps and you have Oracle JAVA JDK 8.x.x installed? as some errors come due to the wrong JDK.
Top

I have reinstalled LCIndy and the Android SDK, but the error is still sidplayed, Here is a screenshot in attachment.

I have Java Oracle 8 SDK installed

Does someone use these features ?
Top

Yes i use them and i don't see those errors.
Are you using Indy 9.5.0 stable?
and on which OS? looks like Linux.
Top

Yeah i use last version Indy stable 9.5.0, on Linux Xubuntu (not supported by LC Team, because of XFCE window manager i think)

You don't have problems with Android Barcode ? Before this last error, i have lot of problem to display the scanner on precise coord on my phone screen, or just show the scanner...
Top

Yes there are some issues. Not all options work together in the Barcode settings.
Maybe check the quality site to check on open issues for the barcode scanner.

I use Linux too to be able to support apps on it. But i merely work on Win10.
So i'm not an expert on Linux, Richard and Bogs are more into depth.
So maybe they chime in.
Top

Heh, well, I could chime in, but as far as the problem goes, I wouldn't have much to offer. I don't have a mobile device, I don't develop for mobile, and I don't do anything with barcode scanners, so right off the top I'm pretty much out of the running.

As far as LC and XFCE go, I never had problems with the combo until the 8x series came along. I personally am not sure what changed, but it is an iffy proposition to try and get them to get along. MATE on the other hand, not nearly so much. So even there, I can't be of much help other than to suggest maybe trying your work on MATE or GNOME versions of 'buntu, something I am usually hesitant to suggest since I also tend to prefer the way XFCE does many things and since I don't use 'buntu (except for testing purposes to resolve problems).

Well you gave some good advice

It was worth what was charged for it

Now i can compile the app and install it on my mobile but can't show the Scanner. I already managed to display it and run it some time ago, but I do not remember how...

Maybe check the quality site to check on open issues for the barcode scanner.

Could you tell me where i can find this "quality site" please ?
Top

This forum thread contains a link to an example quality site report, as well as being somewhat relevant to the barcode scanning feature:
viewtopic.php?p=181835#p181835
Top

Thanks SparkOut, i will read that.
With a simple stack i can display the Barcode Scanner but unfortunately not in my app (however with exactly the same properties)...

Thanks to my test the previewXXX attributes is the resolution of the camera, it have to be the same ratio of your widget width and height.
Top
Post Reply
26 posts