Why when I put the ticks into a variable, I get it in scientific notation, whereas if I just ask for the ticks, I get an integer.

I am in v.9.04. I do not remember this ever happening in earlier versions. I can convert using the "format" function, but what is the scoop?

AH HAHAHAHAHA. You kill me.

Let me catch my breath.

It also applies to "the seconds".

I don't see a preference that formats numbers in the SE.

Glad you got a chuckle from my following of your formula, even if I'm not sure why 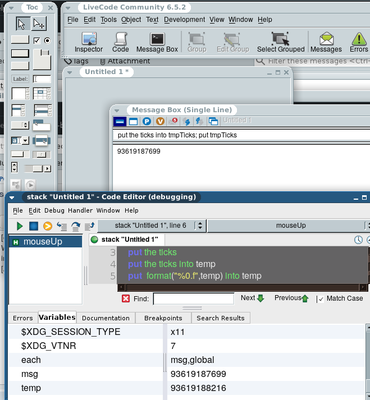 And now for something completely different...

I don't, sort of. In a button script:

The third line, concatenating the two functions, shows integers all around.

A small thing, likely a tiny bug, but I wasted a lot of time on it. If nobody else has seen this, I am not sure it is worth reporting.

To test for stuff in the newer versions, I have to launch a VM and on my incredibly underwhelming system that is something I only do when I have *lots* of spare time on my hands.

I vote for you to report it

This sounds like the automatic typing the engine does so that we don't have to declare typed variables. The engine is treating the data as a float until it is transformed to text. This is what numberformat does too and the data has to be put in a field or treated in a script as text before it displays as text. In your example, comcatenating the ticks and the seconds transforms it to a text string.
Jacqueline Landman Gay | jacque at hyperactivesw dot com
HyperActive Software | http://www.hyperactivesw.com
Top

I get that, which is why for decades I have always added a "0" to any value after changing the numberFormat.

But as usual I am the only one seeing this. And it is a small thing, after all; LC is perfectly capable of using scientific format for all its needs (and mine) that incorporate these two functions.

It's not just you, I see it in the variable watcher frequently. It just never bothered me and didn't interfere with the scripts.
Jacqueline Landman Gay | jacque at hyperactivesw dot com
HyperActive Software | http://www.hyperactivesw.com
Top
Post Reply
11 posts • Page 1 of 1