Ok, I am seriously baffled. I am new to LC but not to software development. I have used dozens of languages and IDEs.

I have LC Community 9.04 installed in four different operating systems: Linux Mint, Windows 7, Windows 10, and OS X. The "problem" occurs in all of them, whether I have the backdrop on or not.

The tool palette does not behave this way. It's always on top, and accessible. Not so for the menu/tool bar, or the project browser.

In Windows and Linux I constantly have to alt-tab to bring the menu bar back into view. On OS X, it there is no solution - a stack I am working on can obscure the menu bar icons, with no way to access the menu bar except to move my created stack.

This problem is exacerbated by the fact that I often want to see my created stacks in fullscreen mode.

Even worse, the project browser disappears all the time in all OS's. Sometimes the only way to get it back in view is to turn it off and on again.

Is there a way to force the LC development windows, or stacks, or whatever the fuck, to stay always on top of other LC stacks?

I have never run into a similar problem with other IDEs. I admit that I may not understand the LC paradigm. But why do I find myself fighting to access the LC development tools all the time?
Top

*Edit - I've altered my post removing the top part since it wasn't deleted as part of the purge mentioned above and then looked like I was replying to invisible post'els {I knew I should have quoted!}

djpenton, what you *could* try doing is something like this, before putting the stack your working on full screen, suspend the development tools (Development menu). Once your done in full screen mode, restore the tools.

goes, the IDE does present buttons on the taskbar, you are not limited to alt/tab alone, however, unlike almost every other IDE out there, Lc does consist of separate stacks, not a unified interface like, say, VS where you you are presented with scrollbars and have to view the entire form (if larger than the IDE can open) by scrolling left, right, up or down or whatever.

Sorry, no OSX advice, but I'm sure there are others who many have worked out a flow for that who will chime in.

However, i think once you get used to it, you might find you like it. I don't know if you've ever used Delphi or some of the other pascal type IDEs, but they work in a similar manner.
Last edited by bogs on Sat Jun 01, 2019 12:31 pm, edited 3 times in total.

Not ignoring bogs, but leaving that latest post aside for now, these IDE anomalies have been happening for a good while now on Windows, but with no way I have found to reproduce on demand. Except for the Project Browser disappearing, which it does almost ALL the time. I pretty much always have the backdrop turned on. I will have to try it without (although that would affect my productivity as much, I feel). I really struggle with the environment these days.
Top

What the OP is describing here is what one would expect with any non-palette window:

Most IDEs don't have this problem because they don't let you build real windows. Instead, they provide a window to draw your layout inside of a drawing toolkit, but not an actual separate window.

Everything in LC's UI is scripted. If you can advise on what which window you'd like obscured by the other, we can provide a quick solution for that.

There is another element in play here, though: the IDE normally sets the windowBoundingRect to be slightly smaller than the physical monitor, allowing the revMenubar stack to remain visible even when the stacks we work on are maximized. That sort of constraint is more or less how other IDEs solve the problem, in which they don't offer a means of doing layout in an actual separate window which can fill the screen (and thus obscure IDE UI elements).

If you're using the fullScreen property specifically, that's a different thing. But if you're maximizing windows, the IDE toolbar should be accounted for.

Please let us know if you're using fullScreen or merely maximizing your window. If the latter, please run this in the Message Box and let us know what you get:

SparkOut wrote: ↑
Fri May 31, 2019 11:13 pm
Not ignoring bogs, but leaving that latest post aside for now, these IDE anomalies have been happening for a good while now on Windows, but with no way I have found to reproduce on demand. Except for the Project Browser disappearing, which it does almost ALL the time.

This brought up something I forgot to mention to friend djpenton, which is that the project browser is not the only way to keep track of stacks/objects/etc in your project, you can also use the application browser, which was the original way of keeping track of your project in Lc, and is now included in the official plugins instead. 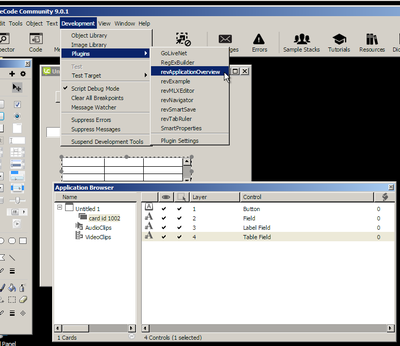 I don't really run in the newest versions of Lc (or on Windows), so hopefully SparkOut has already tested using this instead of the PB and can say if it is affected by the same disappearing issues?

Haha, I have used the application browser since forever, and it doesn't suffer the same problems as the PB. I hated the PB at first, and slowly grew to tolerate it because it was improved from its first instantiation, but the performance became very bad along with other aspects of the IDE during the r*fac*o*ing period. Performance has improved "somewhat" but there are all sorts of random errors and issues which seem to have been introduced in later versions, in the PB and Script Editor etc, even the tool palette dragging out a non resizable object, or one that constrains itself to square. I have found it impossible to get to the bottom of any reason why, and can't produce a recipe to file a bug report. It just seems that I am fighting the IDE more whereas I knew and instinctively worked in the older IDEs with consistent behaviour.
Top

SparkOut wrote: ↑
Sat Jun 01, 2019 2:14 pm
I have used the application browser since forever, and it doesn't suffer the same problems as the PB.

Well there you go then djpenton, the application browser may be your solution to the project browser issues

Well, you know (I think) that I completely agree with that, even if I don't have a stick in the fire.