Bringing the internet highway into your project? Building FTP, HTTP, email, chat or other client solutions?

I want to give general remarks about tsNET on Windows using email connecting to an SMTP server. The local "mailto:" for me is not really what is usable to my needs.

After some struggle with settings and passwords, I finally had success in sending mail with SSL (secured and encrypted).

What seems annoying is the way the test stacks are made, probably only made for Mac users, but for Windows 10 and earlier it just is not something that should go out to the public.

I made my own version just making the page readable for myself. But other users may be distracted right away.

Since LC is so attractive, and the vast majority in business is using Windows --- whether you like it or not -- it must really be important to test anything that goes as "example stacks" or something official or semi-official on all platforms, but there is a priority for Windows if the business market and the really big general market is considered.

I offer my help if resources are missing for Windows design, and I will not change the platform because >90% of business is on Windows in my country (Switzerland), the rest is almost not countable.

It would also not be too much effort to add simple explanations with the context of white papers and example stacks even regarding acronyms such as SMTP, SSL, TLS, etc. and explain what could be done with tsNET and how the MIME format is made up and giving just knowledge to newbies so that they can have an idea for which purpose such tools are made and could be used.

I mean, especially official "example" stacks should be made with lots of love for the user opening it.

I suggest using a standard visual design for example stacks with a really well-made user interface and a style that reflects what LiveCode is up to. Placing the LC-logo only is not enough. Fonts should not be in 20p for general purpose labels and fields, and then they break the fields and everything on the page. 14p or 16p is big enough. I could go on here... The stack size also does not have to be bigger than any normal monitor can hold. Keep it for the minimum sized monitors.

Why not such general purpose example stacks are also coming with a visual design that reflects the modern design and UX principles that LiveCode would like to establish and live up to? There are some great LiveCode designers out there such as Scott Rossi and a few others. We are visual "animals". We are attracted by what our eyes see. Basic navigation could be there. Even a zooming in and out, a simple resize stack handler and a top modern look&feel.

Every example is a "messenger" to the public. Everything that goes out will be reflected. And any such opportunity should be seen as what it is: An opportunity.

(As a side mark and a bit off-topic: I also think that the IDE looks quite ugly. Sorry. Grey and black -- could be well have done even without colors. But icons should at least be top quality. Maybe better to steal some design principles from Adobe and others? I am also REALLY fighting with all those IDE windows that are scattered around and I have to close them frequently because I lose track. I will go to tinyIDE. But is this IDE something a new user -- already used to fantastic design -- will be attracted to?)

P.S. By the way: Do people understand what tsNET can do and what it means? Should that not be much more explained wherever possible, but as a minimum within the context of such example stacks? What else does tsNet do? Why should I have it? What makes it different? Why should I purchase an Indy or Business license? 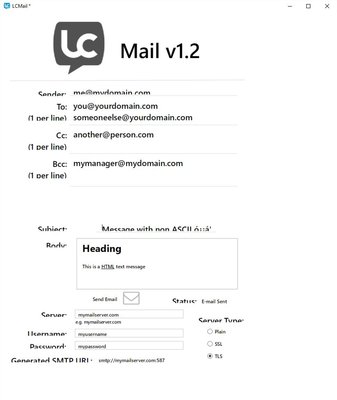