Modified outside of script

Modified outside of script

See the attachment for the error message. Long story short, I keep losing quite a bit of work because I keep getting this message that the code is being edited outside of the editor. This isn't true and I can't seem to resolve this situation (restarting hasn't worked). Thanks for any help. 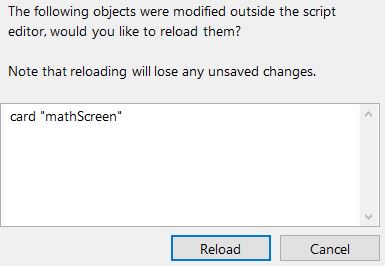 These things pop up for me now and then as well, and I am at a loss to determine why. I am on a Mac in v6.7.

Never had an issue with them, but also would like to know what process engenders them.

Here is one answer I found on the web:

I understand that sometimes when you run a script, a message pops up that it has been modified outside the editor. As you mentioned that this happens when you are accessing files located on the server, it is possible that someone else who has access to this script had the file open at the same time. This might have caused the message to pop up.

And the user replied that this was exactly what had happened. But I do not work with servers.

1. As with any program, frequent saves avoid lost work.
2. Which version are you using? This may have been resolved. If you're using a current version then:
3. Do you have a recipe for reproducing that? If so you can file a bug report to have it addressed.
Richard Gaskin
Community volunteer LiveCode Community Liaison
LiveCode development, training, and consulting services: Fourth World Systems: http://FourthWorld.com
LiveCode User Group on Facebook : http://FaceBook.com/groups/LiveCodeUsers/
Top

This error has shown up for years, though it's been happening to me more frequently lately. I haven't found a consistent recipe to report, though the cause seems to be related to a change in the script that doesn't match an internal stored copy.
Jacqueline Landman Gay | jacque at hyperactivesw dot com
HyperActive Software | http://www.hyperactivesw.com
Top

same here. It definitely doesn't have to do with files that are changed from outside (files on a shared medium), this is misleading.
I suspect it to be [name changes in the property inspector of an object open in the script editor] that trigger it, but cannot reproduce it. There must be more requirements for it to hit.

And as usual it happens only when you haven't saved for a long time, have written /debugged a lot of important code, and would be hurt hard by losing your progress.
So using Max' auto backup is a good way to prevent it! ;-)

Have fun!
Livecode programming until the cat hits the fan ...
Top

This definitely happens more often with LiveCode v8 and v9 and occurs in my observations more often the longer LiveCode is open. I've Also noticed that in conjunction with this the Project Browser may have problems with syncing the components highlighted on a card with those highlighted in the Project Browser and the open script. Could this lack of syncing cause the error ?
Andy Piddock

I just today wrote a short utility handler in a button that set the script of a bunch of fields to empty. Essentially changing these scripts from "outside". I got a couple of such dialogs just a little later, and I did not notice what invoked them. I will try to recreate with a test stack...

It happens to me when I use two stacks with the same name.
Even if you close a stack, it remains in memory. You should:
Livecode Wiki: http://livecode.wikia.com
My blog: https://livecode-blogger.blogspot.com
To post code use this: http://tinyurl.com/ogp6d5w
Top

I use an LC stack as a versioned repository, tester & builder for my operational stacks.
This worked fine on LC7.1 (and all the way back to HC1.4).

Now, with LC8, I just get the dreaded Scripts Externally Modified bug.
It looks like the LiveCode developers don't know how to fix this newly created bug.

Best to revert to LC7.1 and wait for common sense to be restored.

What is the stackfileversion of your stack?
Have you "Preserve stack file version ..." enabled/disabled?
shiftLock happens
Top

To whom it may help:

It happens to me for the first time (LC 8.14 on OSX). It happens after I paste a string in the script editor and it was an encoding problem.
When I pasted all the script if a text editor and tried to save it as MacRoman, text editor complained about an UTF8 character. After deleting this "bad" character, and paste again the cleaned text in LIvecode script editor, all was working fine.
Top

Sorry for the interruption of this discussion, I've never hit the external mod error yet, but was interested in whether someone could enlighten me more on this statement

GeofHaighAgain wrote:LC 8.1.3 on Win10P.
I use an LC stack as a versioned repository, tester & builder for my operational stacks.
This worked fine on LC7.1 (and all the way back to HC1.4).
____ Geof

Thank you in advance