Why Am I Always a Beginner???

Why Am I Always a Beginner???

I make any kind of menu-style button. I put something really complex in its script:

Works fine. BUT, if I comment out the "mouseDown" handler, it does not work at all; the menuPick handler does not fire.

I was playing with an long time running stack, and all of a sudden it did not work. I only knew about the mouseDown message because the Message Watcher told me it was sent. I was not surprised at that. I am surprised, however, about the other stuff. I never needed to trap and bury "mouseDown" before.

Passing "mouseDown" in its handler also (no surprise, sort of) disables the menu.

I use menuPick all the time, and very rarely with a mouseDown handler in the same script. Can you post a sample stack with this anomaly?
Richard Gaskin
Community volunteer LiveCode Community Liaison
LiveCode development, training, and consulting services: Fourth World Systems: http://FourthWorld.com
LiveCode User Group on Facebook : http://FaceBook.com/groups/LiveCodeUsers/
Top

Just saw your post as I was making a test on my home computer. Works fine without any "mouseDown" nonsense.

This is not the first time I have found weird things happening to my work Mac. Tomorrow I will restart the machine and see ( I had already quit and reopened LC).

The workaround (trap and bury "mouseUp"), if you can call it that, seems stable. It may be me that is not stable.

I'm a beginner after about 19 years of RR/LC and about 44 years trying to program computers
so I don't know why you are asking that question.

I am a little confused, Craig.... your first post specifically listed this code:


and then specifically said

After Richard's answer you said :

Just saw your post as I was making a test on my home computer. Works fine without any "mouseDown" nonsense...
...
The workaround (trap and bury "mouseUp"), if you can call it that, seems stable. It may be me that is not stable.

Which is it? mouseUp? mouseDown? both? neither? 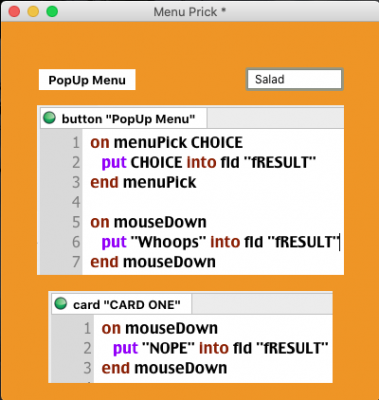 -
This stack has a mouseDown in both the card and in the drop-down menu.

When you click on the drop-down menu the mouseDown fires first, followed by the menuPick.

The reason I will always be a beginner is because I am lazy.

The stack in question has a mouseDown handler in the card script. That handler tests a custom property, such that if that condition is not met, it exits to top. My poor menuButton had no idea of that. The handler was meant to deal with quite other issues.

That is why I have to head "mouseDown" off at the pass in the button.

Thanks to all for bearing with me, as I learn how LC actually works. 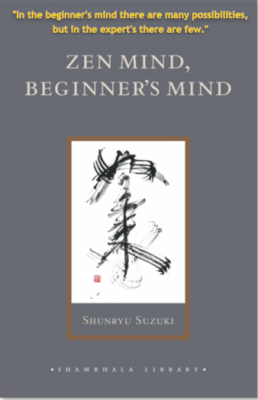