Hello, friends. It's been a while since I've gotten to play with LiveCode. I downloaded 9.5.1, and much to my disappointment, it is crawling. It takes forever to type in the IDE, select menus, etc. It seems like it's faster when I first start it (but still not snappy), and progressively slows down. I know there is a good explanation, but this is untenable!
Any ideas?
Top

This is not a suggestion, just a diagnostic step: Try turning off Windows Real-Time Projection and see if performance improves.

Once you've done that, turn it back on again immediately, and then report back here with what you found.
Richard Gaskin
Community volunteer LiveCode Community Liaison
LiveCode development, training, and consulting services: Fourth World Systems: http://FourthWorld.com
LiveCode User Group on Facebook : http://FaceBook.com/groups/LiveCodeUsers/
Top

In general, this is rarely seen. I am on a Mac, but that should make little difference. It is, as Richard said, likely not LC that is the problem .

I notice it, and have seen quite a number of references to similar problems in IDE performance.
It is MUCH better than it used to be in LC 8.x but still apparent, but without a consistency or recipe. Sometimes it slowly reduces in performance over time and a restart of LC improves things again, which makes me think of memory leaks. Otherwise it can be intermittent, and a restart of LC might not help. On occasion, I have noticed the LC updater running (no updates to collect even so) and killing the updater task improves things for a while.
Advice such as turning off the Project Browser when moving objects has been quite useful but only addresses one symptom. Adding the LC directories to antivirus exclusions sometimes has a noticeable effect. There have been great efforts by the development team to improve IDE performance and this is much appreciated. But it is not rare to notice the IDE struggling, for whatever reason, whether LC or other factors at work.
Top

HI, I also see this a lot but, only badly on one of my Win 10 computers.


So the only differences between the two computers are in specs.

The not so problem one has an i7 with 16Gb
The problem one has i5 8Gb, so I suspect the 16GB one is also having the same issues but the extra ram is helping to mask the problems as it does crawl eventually.

Apart from the solutions you noted, do not open the message box, this really slows down the whole IDE on both computers.
Andy Piddock

This is correct. I also do not use the message box because it makes everything unusable slow (Windows 10 user).
Top

It's mostly a Windows problem and I've seen lots of posts about it. But I've experienced a (much briefer) delay on Mac too, but only a handful of times. It's always while typing in the script editor. Input will stop for a few seconds and then suddenly appear.

For script editor problems it's helpful to turn off script completion and all the other automated enhancements. I do use auto-bracketing for parentheses, square brackets, etc. but keep all the others turned off. I'm also probably the only person in the world who works with script colorization turned off, which might help a little too, but most people can't stand that.
Jacqueline Landman Gay | jacque at hyperactivesw dot com
HyperActive Software | http://www.hyperactivesw.com
Top

What is auto bracketing? I do not see that in the preferences.

"I do use auto-bracketing for parentheses, square brackets, etc.

Not to sound contrary but merely clear, that's not what I said. This is a real issue, and it is more pronounced on Windows than any other platform (Mac is usually quite snappy, and most Linux performance is generally excellent). But it is also not consistent, varying from system to system, and on a given system from project to project.

This makes it hard to pin down, because it appears as though there are multiple contributing factors. So my focus is on assessing the relative contribution of known factors in a given case, and remaining open to discovering possible new factors along the way.

When talking with someone expressing this for the first time, the benefit of starting with Windows Defender's Real-Time Protection is that its effects are usually quite pronounced, and extend to affecting a good many apps beyond LiveCode.

Once we can asses that impact, further tests within LC will hopefully help us hone in on the problem(s) in actionable ways.

The Message Box appears to be a part of this, but rather than lead the witness I usually prefer to ask open-ended questions and learn from what the user describes. Many good insights can come about that way.

We'll get there. LC's strongest area is in desktop apps, and on the desktop it's all about Windows, with both Mac and Linux being also-rans. The team understands this, and working with them to identify primary and secondary bottlenecks should produce a work plan that improves performance very affordbly.
Richard Gaskin
Community volunteer LiveCode Community Liaison
LiveCode development, training, and consulting services: Fourth World Systems: http://FourthWorld.com
LiveCode User Group on Facebook : http://FaceBook.com/groups/LiveCodeUsers/
Top

I only really meant that other influences were an issue, not that LC per se was a snail.

"I do use auto-bracketing for parentheses, square brackets, etc.

What is auto bracketing? I do not see that in the preferences.
Craig 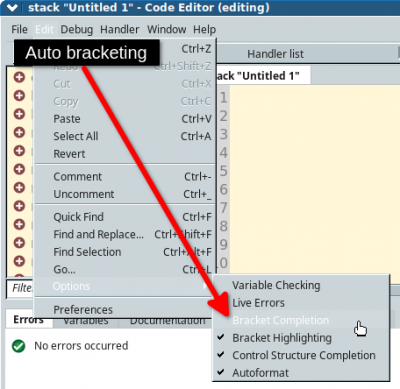 You know, I have almost never used the "Edit" menu when it the debugger is open. And I do remember seeing and testing that option, though years ago. I will leave it in place for a while and see if it works transparently. 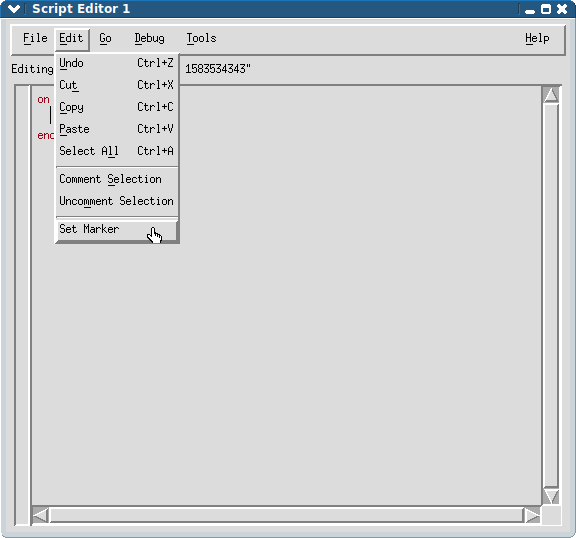 I wasn't at my Mac when I wrote that so I forgot what it was called exactly. Bogs' image shows it, I should have said "bracket completion". And now that I've looked, I also use autoformat and control structure completion. From what I have read, all those menu options can slow down the editor but on Mac the problem isn't as bad.

I have a love/hate relationship with bracket completion. You have to hit the right-arrow key to go over the closing bracket or quotation mark. That's annoying, but on the other hand, it really helps to keep your nested brackets in the right places. So I leave it on.
Jacqueline Landman Gay | jacque at hyperactivesw dot com
HyperActive Software | http://www.hyperactivesw.com
Top
Post Reply
19 posts