I know this has been discussed before, that there are peculiarities with msg.

For example, in a card with one button and one editable field, if, in the button script:

I get a blinking cursor in the field. But the same command from msg does nothing at all. Still that sort of behavior? LC 9.04

Hi Craig,
Same result with LC 9,5.0.
In this case LC is smarter than i tought. LC is able to keep the last position of cursor after a click outside field

That is indeed cool, and actually is mentioned in the dictionary.

Well, it does something on 'nix in 9.5, when I run that from the message box, it briefly focuses the field before it ultimately focuses the tools palette 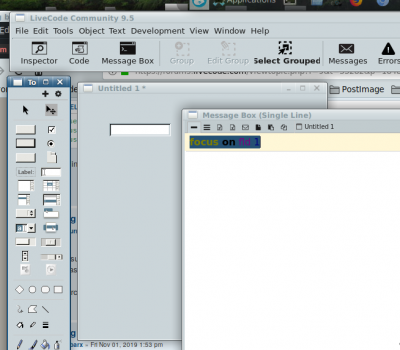 @Craig. The message box is set to get focus after issuing a command if it is visible.
So it is a possible way to first hide it in order to loose that 'superior' focus.

@bogs. The repeated selection of the tools palette is an old unix bug.
shiftLock happens
Top

It could be, but I wasn't able to reproduce it on this box in 6 - 7.x versions of Lc, using 'focus on field 1' from the message box actually put the focus on the field but then returned it to the message box in those versions.

In 2.2, the message box simply reports 'no such object', but doesn't loose focus itself.

In Mc 2.2 (Starter Kit), it simply sets the focus to the field as it might be expected to do.

* DIsclaimer - YMMV, a watched pot never boils, a bird in the hand is worth 2 in the bush, etc etc etc.

I think that you will find that putting this in the Message Box works:

That has always worked. Msg seems to "get" more narrowly defined instructions, like "after", but "focus" is what I was asking about. This because the dictionary says quite clearly what this command should do to a field. Doing so from, say, a button script works just fine.

That has always worked. Msg seems to "get" more narrowly defined instructions, like "after", but "focus" is what I was asking about. This because the dictionary says quite clearly what this command should do to a field. Doing so from, say, a button script works just fine.

Ah I see, sorry I completely missed that one, but I am a bit under the weather at the moment and a little more obtuse than usual.

It is curious, though, that even though Mc's message box is the same, it doesn't do the same, i.e. return focus to the field issuing the command entry.

In fact, here on 'nix, it doesn't return focus to the message box either, least not on XFCE. Focus ultimately winds up at the tool palette, which of all the choices is the most bizarre. I need to test it out on MATE, since I know 8.x and up give weird results on XFCE anyhow for even the most common place expectations.

As Hermann said, a bug for 'nix, so might it not be a bug all the way around? In other words, something has changed from (what I consider) the expected behavior to the unexpected behavior of either focusing the tool palette or returning focus to the mb on other OS'es. If it is different on 2 OS'es in an environment that is supposed to be the same on all, that sounds bug like.

*Edit - In my previous experiment, I was using the Mc IDE with the Mc engine. To see if it were the engine producing the difference in the result, I switched to Mc IDE + Lc 6.7.11 engine. The result was the same as using the Mc engine ( Field got the focus, not the msgbox), so I can only assume at that point that changes were made in the scripts governing the msgbox field, if Richard's theory is correct.

*Edit 2 - in playing with this across multiple versions/desktops, I've actually come to the conclusion that the way Richard explains it is in fact the way it should be working *because* I can see that the field does get focus after the command executes, so the command itself is working as the dictionary states it should be, but as he points out, when your in the message box, you expect to issue more commands following the one to set focus, unlike when you execute a script from a button, where you expect that the code is (more or less) finalized.

Side edit - In MATE, focus does not switch to the tools palette, testing for me is finished 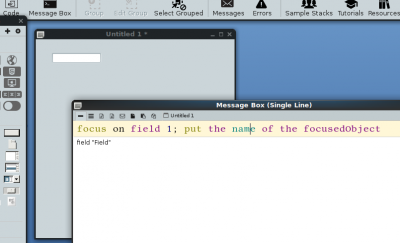 That has always worked.

Then the sensible thing might be to use 'that.'