by sefrojones
I just went through the existing stacks, and it seems that many images used are still relevant today. Here is a list of the images I found that needed changing:

As far as I can tell, the only image that needs changing is the Rev logo to a livecode logo, plus any changes Jacque sees fit tomake.

These are the ones that I've found that need changing. There are quite a few images throughout these stacks, but for the most part it seems they are still an accurate depiction of the current IDE.
Another thing that could apply to all the stacks is the authors bio page, perhaps the authors have new Logo graphics/links they'd like to see added.

As far as Project planning stack and quizzes, while a good idea, perhaps would fit better into a different project. (RevOnline/RevNet?) I agree with Jacque that these stacks are for the absolute beginner, which is something we should keep in mind. I think the revised list of topics definitely makes the list more manageable. If anyone would care to confirm my assessment as which images are in need of replacement, I would be grateful, as there may be something I missed.

by jacque
Thanks Sefro, that's really great. There aren't as many images as I thought, so it seems manageable. Do you think we need to contact the authors to get their permission to alter their screen shots? Even better, maybe some of them would be willing to submit new ones. I think I will post to the mailing list about our proposed changes and see if any of the authors have objections to the changes. I don't expect any, but it will give them time and notification to let me know.

All instances of "Revolution" in the text of all the stacks will need to be changed as well. Once we're fairly sure no one has objections we can start on that. I also need to let RR know about the project to see if there is any feedback.

by jacque
I've written to RR. We'll see what the feedback is when they can respond. They're pretty busy right now, it may take a few days.

by catalinanesia
As a newbie (on programming and LC) I salute this initiative,
I could not resist not to post since Jacque made a very good point.


Jacque: I've found that learning the syntax is usually less challenging than figuring out the basic behaviors of the engine; you can generally find the syntax you need with possibly some help from the forums, but understanding how the engine works and what it does with your stack isn't as well documented. That was a focus of the conference stacks that'd I'd like to keep.

I will follow this Project for sure ...
Thanks!
Catalin

by jacque
RR has replied with their approval, and I have posted to the mailing list asking any authors with feedback to contact me. So far I have received 3 responses, all approving, so I think we can forge ahead.

I will replace the logo in the template stack and update the things that Sefro found in the existing stacks. That won't take too much time, and I can probably do it this weekend.

Scott Rossi, our images guru, has said he'd be willing to do an images topic if he gets time. That's a big plus, he's done several RevLive conference sessions on design work, and he really knows his stuff. Mark Wieder is another one of our knowledgeable pros and has mentioned an interest in doing a topic on XML and/or behaviors. He's already contributed to one of the earlier stacks and did a great job. I have someone in mind to cover unicode but I haven't made contact yet.

by sefrojones
That is awesome Jacque! Let me know if there's anything else I can do to help this along. It' great to hear that the authors are open to the idea, and also that there are some possible volunteers for authoring new stacks. I think this will be really helpful as a learning/reference tool. What do you think about the idea of making a kind of directory stack to bind these stacks together in order, possibly as a plug-in? It's easy enough to download the stacks individually, but I think this would be a nice touch. Just my 2 cents. Thanks so much for helping to make this happen!

by jacque
Sefro, I'll take you up on your offer. I've revised the images and updated the template stack. Now I need someone to update all the old, existing stacks. I have a script written that will do much of the work and each stack should only take a minute or so to fix. Would you like to volunteer to do that?

by jacque
I'm going to enclose the updated background image in case anyone has suggestions. I'm not an artist and I have only a rudimentary knowlege of Photoshop, so if someone wants to improve on what I've done, let me know. The original logo was actually embedded as part of the entire background image, so the whole thing needed to be changed. I found that the blue logo looked out of place on the original color scheme, so I changed that.

This is what will be the new image, unless someone with more skill than I have is willing to change it.

by sefrojones
Absolutely, if you'd like to PM me with links to the new template/ updated stacks , I will gladly do it!


Edit: I just realized that you meant you had created the images/template but not added them to the existing stacks. If you'd link me to the templates and new pics I'd be glad to add them to the old stacks, which I already have copies of. Or do whatever other updating is necessary.

by jacque
PM sent, Sefro. Thanks!

I'm working on the revisions that Jacque has asked for, and I should have my part done on Monday or Tuesday, and then I think we just need the updated images and they should be ready!

by sefrojones
As per Jacque's instructions

edit:
This is what they look like after being updated. On my screen the background looks pixelated, but Jacque says she's not experiencing that. I'm attempting to figure out how to use photoshop to fix this, but so far I'm not having too much luck. If there's a PS expert who'd like to help with this it would be awesome.. 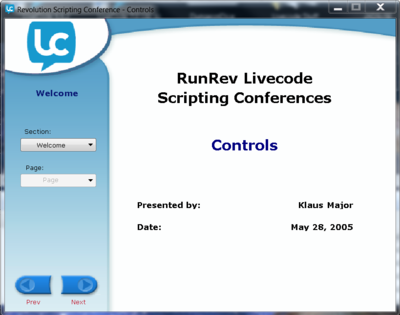 by FourthWorld
If it's up for a vote, cast mine for just using the product name, "LiveCode", rather than adding in half of the company name.
All times are UTC+01:00
Page 2 of 3
Powered by phpBB® Forum Software © phpBB Limited
https://www.phpbb.com/