Richard, I have been using Toolbook Openscript. In Toolbook groups are just collections of objects (and nested groups) and don’t have a ‘wrapper’. They behave just like single objects inasmuch as they can be resized by dragging or in codeas if they were one object. Another advantage is that you can change the background color of a group and all items in the group individually adopt that color, so you can color a group of objects in one instruction and turn one back, leaving the others colored. In LC objects in a group have both a common color and an individual color. That one caught me out!
Top

It's been a while since I worked with Toolbook, but I sure enjoyed it. I really miss Viewers.

This group behaviors you describe are very close to home LC handles them. I didn't recall that if it group an object in TB you can no longer set individual colors, but in LC if you clear the color setting of a control in a group it'll inherit the group color.
Richard Gaskin
LiveCode Community Liaison
LiveCode development, training, and consulting services: Fourth World Systems
LiveCode Group on Facebook
LiveCode Group on LinkedIn
Top

LC is not a CAD program, though I have made it into one for a project of mine.

As Richard points out, a group is simply a control that contains other controls. It has no overarching, er, control, over its children.

Do this. Make three buttons on a new card. Place two of them close to each other near the center of the card and group them.Set the 3D of the group to "false" so you can see its border. Now in the outlier button script:

I did some in-house program development using ToolBook in 1999 and found that after HyperCard itwas
not a great improvement (far from it in fact). Of course in the last 21 years it may nave improved, although
looking at its website it simply seems to have been dumbed down.

Finding MetaCard, and then RunRev (now called LiveCode) in 2001 was a breath of fresh air.

My inclination is to resize them individually and not bother anent groups.
Top 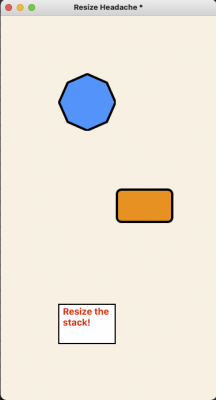 OK, OK: I'll pretend to be clever just this once.

Thats fine for 3 objects - now try it with 75 objects of various types including 12 nested groups. One line of code in Toolbook.

Anyway thanks everyone for your help, at least I know I haven’t missed something simple. Back to my coding cave!
Top

One line of code in Toolbook.

Well, go back to Toolbook if it's so marvellous.

Of course all that means is that, behind the scene, the Toolbook engineers have done
a lot of the heavy lifting already.

However, I've never liked driving automatic cars, much prefering manual ('stick' USA) as I feel
I have more control over the thing.

I can never quite understand remarks like that (One line of code in Toolbook) in the context
of LiveCode. Toolbook is a different beast (it used to be similar but has gone off on a different
trajectory) to LiveCode. Both have undoubted advantages in differing contexts, although I would
like to think that LiveCode is far, far more flexible than Toolbook currently is.

The fact that Toolbook can scale everything on-screen with "the flick of a switch" may, indeed be jolly useful.
I would ask whether one can be selective about components on-screen that are and aren't scaled.
Last edited by richmond62 on Thu Nov 26, 2020 2:27 pm, edited 1 time in total.
Top

now try it with 75 objects of various types including 12 nested groups.

If you paid close attention to the code in my second version you would see that the number of objects was immaterial,
and, frankly, de-group the groups as all they may serve to do is muck up the scaling..
Top

Anyway thanks everyone for your help, at least I know I haven’t missed something simple. Back to my coding cave!

Yeh resizing groups is probably not the way to cater for the entire user interface. As Richard mentioned:

FourthWorld wrote: ↑
Wed Nov 25, 2020 8:53 pm
From your description here it sounds like your app may be a good fit for fullScreenMode - you can learn more about using it here:
https://lessons.livecode.com/m/15262/l/ ... ll-devices

is probably the way to go for that.

Personally i wish the geometry manager worked more reliably, that may have been a good way to do this - but so far i really i can't get it to do what i want it to do. It does seem like a lot of complexity has been crammed into it where a simpler variation (like with FileMaker Pro) would have been more usable, but that's just me...
Top

Well, go back to Toolbook if it's so marvellous.

Too much snark, Richmond. Not necessary.

Groups are convenient containers that can be useful in many ways, including acting as single objects for custom controls. They also get specific messages intended to help with problems like scaling and positioning. I wouldn't denegrate the use of groups. In this case they are an advantage.

Scaling the contents does have to be done by script if the app doesn't use fullscreenmode. The scaling can be done inside an openControl or preOpenControl handler in the group. This would allow independent scaling per group as needed. These messages also are sent to nested groups, see the dictionary entries. The example mentions scaling as one reason to use these messages.
Jacqueline Landman Gay | jacque at hyperactivesw dot com
HyperActive Software | http://www.hyperactivesw.com
Top

I had to move from Toolbook as it is no longer supported and development has stopped. In fact I was surprised not by the differences between Toolbook and LC, but by the similarities. Both share the concepts of books/stacks, pages/cards, Openscript/script, the ‘it’ variable, programmable graphical objects, groups (!), etc. etc.

In most cases I have been able to copy and paste pages of script, then just run through and change it to suit LC, ending up with a similar amount of code.

Obviously coming from a different program I expect some hiccups, I just have to adapt. LC has the great advantage of being multi-platform, but I still think Toolbook scores visually and has some features LC could learn from. But then nothing in life is perfect!
Top
Post Reply
28 posts