Thanks. I don’t mean simple alignment tools like you mentioning mean dynamic alignment tools that appear when you move a field or object around like you can see here.....https://youtu.be/r1UOx0vo_Jc at around the 25 second mark. Can you configure this?
Top

I believe someone wrote a plugin to do just that thing, if I'm not very much mistaken it may even be in the user sample sharing.

Try this in the message box:

Doesn't seem to work on Mac but may work on Windows.

Yes, works as described on Linux and Windows, though it doesn't really make much sense as palette windows are distinguished by their always-on-top behavior. Turn that off and they're effectively the same a modeless.

As for the IDE windows, yes, most are palettes and as such will float on top of non-palette windows, with one exception: on Windows and Linux revMenubar has a mode of 2 (non-editable toplevel). I think this was to avoid annoying submarining of the drag bar of one's own stacks beneath it. But it does make it feel funky to me, and I don't know why they chose to introduce this platform inconsistency.
Richard Gaskin
Community volunteer LiveCode Community Liaison
LiveCode development, training, and consulting services: Fourth World Systems: http://FourthWorld.com
LiveCode User Group on Facebook : http://FaceBook.com/groups/LiveCodeUsers/
Top

FourthWorld wrote: ↑
Fri Nov 30, 2018 11:24 pm
Yes, works as described on Linux and Windows, though it doesn't really make much sense as palette windows are distinguished by their always-on-top behavior. Turn that off and they're effectively the same a modeless.

I think the various palettes and tool windows should act that way, just as they have in the past all the way back to Mc.

Aside from being the way anyone who started with Lc way back when would expect them to act, I find it pointless that they should prevent you from easily seeing any part of what your working on.

If you look at the IDE palettes like dialog boxes, for instance, there are cases where a dialog *should* prevent you from continuing unless you make a choice, and (where extra tool type dialogs are concerned) they should be modeless, allowing those to be open but non interfering.

Essentially, in the IDE, where the palettes we're talking about are extra tool types, they should not be forced to the top, any more than the menu bar is. They not only interfere with your working non palette windows, but with other windows that the IDE itself has, such as the dictionary, project browser, etc as certain palettes seem to dominate that top slot, like the *property inspector.

*Of course, my criticisms might carry less weight than others, since I only use this software on non supported distros of linux. In the past, this mattered far less, but it appears to becoming far more dominant with the newer IDEs.

MC's Tools palette was always on top. If it appeared otherwise that was a bug.

There are reasons OSes provide different window modes. Whether palettes should be universally abandoned is a matter of taste I suppose, but enough apps use them that we may want to reconsider before allowing all of them to submarine below the stacks we're using them on.

The various OS HIGs describe the role of palettes compellingly, at least enough that they have become common for certain tasks.

One of the difficulties with LC's Tools palette is that it's simply grown far too large, less a problem with its behavior than just having too much seldom-used stuff in it.
Richard Gaskin
Community volunteer LiveCode Community Liaison
LiveCode development, training, and consulting services: Fourth World Systems: http://FourthWorld.com
LiveCode User Group on Facebook : http://FaceBook.com/groups/LiveCodeUsers/
Top

Markm49uk wrote: ↑
Fri Nov 30, 2018 10:26 pm
Thanks. I don’t mean simple alignment tools like you mentioning mean dynamic alignment tools that appear when you move a field or object around like you can see here.....https://youtu.be/r1UOx0vo_Jc at around the 25 second mark. Can you configure this?

Bernd, I should have guessed it was yours

I suppose that is possible, the only way I've ever seen Mc work (the real original starter kit one) was as you see it here - 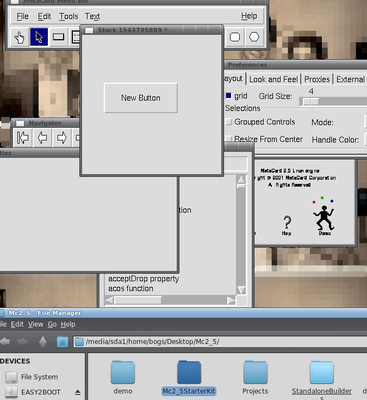 However, that aside, every version of Lc that I've used, from 1.1 to 7, NONE of them do this hokey stuff ~ 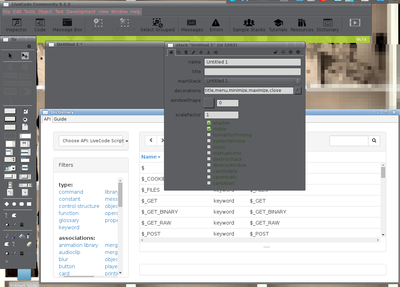 Now, I am sure that people that design OSs have real good reasons for the stuff they declare is *right*, and if they declare palettes should be upside down and purple, well, I'm glad I don't design OSs

Since Lc isn't an Os though, and just between you and I and the fence post, since I don't think anyone using the IDE cares if you call it a palette or a bumbrush, i think it should act like a modeless bumbrush rather than a stuck up strumpet that can't get off the top of their throne.

Ahem. If you see what I mean.

That's the menu bar. This is the Tools palette I was referring to, similar in layout and behavior to tools palettes in drawing programs.

Yes it is. Bit redundant to have both a menubar with a complete tool bar, and a toolbar (which seems like the only thing I didn't get with Mc). Yours is not from the original Mc (noticing the dg on the bottom)

The reason is because you can't actually activate the tool palette in the real one pictured above.

When I first got hold of this version, though, I was unaware there even was a tool palette other than the one below the menu. Go figure.

I didn't in fact find out about the tool palette till much later, right around the time I finally got the stacks passwords taken out of the OSS version.

Hey that is a super little plugin. Thank you for that.
Top

Bernd does a lot of great stuff, you might also want to check the tinyDictionary he, Brian, and others put together.

bogs made me aware that bnGuides is not working in pre 7.0 LC versions

Here is a version that was saved in LC 5.5 format. (should also work in later versions of LC)

Will give it a thorough testing later today

I think the main point here is that LC is infinitely customizable. All its parts are built with the same tools you use to create your own stacks, so if you don't like a certain behavior you can customize it as you please. Some things are more challenging than others and require you to be familiar with the copious scripts that run the IDE, but add-ons like Bernd provided are independent and easier to implement. Nothing is set in stone, and if you do create a change you'd like to see as a permanent solution to the IDE, you can submit it to the team and they will consider it.

I think most of us who use LC have created personal tools, shortcuts, and behaviors that make our work easier. Some users have created entire alternate IDEs that largely replace the one you're using now. You aren't limited to only what you get out of the box.
Jacqueline Landman Gay | jacque at hyperactivesw dot com
HyperActive Software | http://www.hyperactivesw.com
Top
Post Reply
31 posts