[SOLVED] Printing to Com port to open a Cash Drawer

[SOLVED] Printing to Com port to open a Cash Drawer

for the last year or 2 I have been using a serialcash draw trigger box for opening a cash draw on my POS system (model DT-100RS) or if I was attaching it to a Tablet the USB version (DT-100U).

All I needed to do was send anything to the serial port (or virtual serial port) and the cash draw would open - fine and dandy.

The hardware company has added the RJ11/RJ12 port directly inside the POS system so no need for an external box - but my software fails to open the draw.


I thought i'd cracked it when the draw opened .. BUT it was a false dawn.

Writing to COM5: (the "Hardwired" com port for the Trigger) it was opening after I had successfully opened the draw with the company test program or by sending the bytes via a terminal program or whatever other means.

If I sent the control codes:

via a string built with ...

The cash draw will NOT open.

If I use Realterm (a great alternative to the missing Hyperterminal) and send the same string as numbers which are sent as the characters by the program , the cash draw WILL open.

In fact my old code will work in this case.

If I restart my machine and not use realterm to open the cashdraw first, then the same code I used will NOT open the draw.

I rewrote my test program to wait 200 milliseconds (just a guess) after writing the data to the port before closing the serial port - SUCCESS.

I did some other tests and I only need the 27, 112, 0 as the serial string and it will open as long as I wait 200 milliseconds (probably less but who cares) before closing the serial port.

basically 27 is <ESC> and 112 'p' which is the epson printer instruction to send output to open the cash draw the '0' is cash draw 1 and if we send a 1 instead of the zero it will open cash draw 2. The two other characters where the on off timings for the pulse but they don't seem to be needed with newer circuitry.

So it seems calling the serial port close routine , closes the port before the control strings are fully transmitted - so it was a timing error which I thought it was but the protocol analyzers I used only showed me what was sent.

On a side note, when I initially tried to do the cash opening via the printer it was printing a sliver of paper - because i was PRINTING the control codes to the printer - I would assume writing to the port like this even if a printer is attached would stop that , but I haven't tried that yet - I only have 25 hours in the day 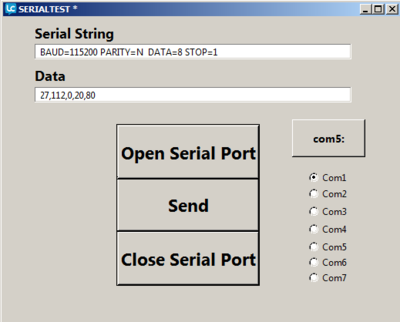