This time I ran two tests, one to PDF (which printed well) and the other using whatever MS is calling "Print to Disk", displayable in OneNote: 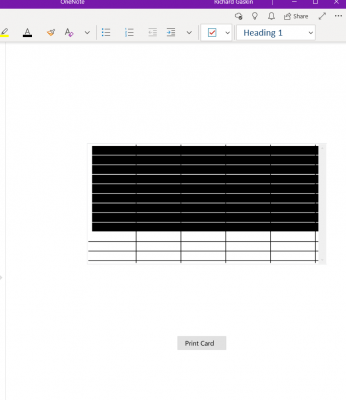 It might also be due to the printer driver. I've heard that's a common problem with LC on Windows.
Jacqueline Landman Gay | jacque at hyperactivesw dot com
HyperActive Software | http://www.hyperactivesw.com
Top

I just originally thought so too, but the OP sees this on multiple printers, and I was able to reproduce it using Microsoft's own "print to file" driver, tested right after applying the most recent updates.

We'll see what the crew comes back with in the bug report, but right now evidence suggests this is a bug in LC, on a platform they've been moving quickly on to address 64-bit compatibility and performance issues - not inconceivable that they introduced a typo causing the hGrid and vGrid line to render much larger than planned, blacking out the text, as appears to be the case from the output.
Richard Gaskin
Community volunteer LiveCode Community Liaison
LiveCode development, training, and consulting services: Fourth World Systems: http://FourthWorld.com
LiveCode User Group on Facebook : http://FaceBook.com/groups/LiveCodeUsers/
Top

Confirm that only by setting the two properties to false the print is OK.
I often use older versions of LC (even 4.6.4!) for having no problems.
So all that remains is to wait for the LC team to resolve the issue ...
Thanks
Sandro
Top
Post Reply
19 posts