Based on the video instructions and previous experiences, I have a few questions - hope you can address them in the session.

1. For Android, what are some good AVD settings, both with regard to the Android version and the selected device?
As you already mentioned in the video, v 2.2 does not work due to an error. From my limited experience it also seems that some devices work better than others. So what are your recommendations?
One criterion could be how well a device represents Android in general, meaning if an app works well on that AVD, it will most likely work well on most physical devices.
Another criterion could be how much resources the AVD requires. I would assume higher resolution devices will strain the computer more than others. My mobile app dev machine is an older MacBook, so this is relevant for me.
Anything else that might impact the choice of AVDs?

2. How do I select a high-resolution (Retina) device in the iOS test environment? I didn't see the option to select one from within LiveCode.
I don't know whether it's relevant, but I have to use a 4.x version of XCode, as the hightest possible OS X version for my dev MacBook is Lion.

3. What are the implications of using MobGui for an app? Does it work for an open source app? How can someone else make later changes to an open source app created with MobGui? Would they need to buy MobGui to do that?
I have an app that now runs reasonably well on Windows, Mac, and Linux. I would like to also make it available on Android and iOS, ideally keeping the code base for all versions the same, maybe with some platform specific conditions.
Do you consider that feasible? Would it make sense to use MobGui in that case? The current app does well enough without it.

4. Could you give an overview over all the different products included in the Coding School package? I understand LiveCode itself, but what about the App Design Kit and the University? If these are addressed in more detail later, could you just give an idea about them?

Thank you - I look forward to school!

Welcome to the coding school

Hopefully you will find the following replies helpful-

As AVDs are essentially emulating hardware, a powerful computer is required for smooth performance. A main factor, as you have mentioned, is screen size. Smaller resolution AVDs do work better than larger ones so this is one feature I would recommend focusing on.

Below is a screenshot of the AVD I use for testing. However, I very rarely use AVDs as devices give better performance and a much friendlier user experience. 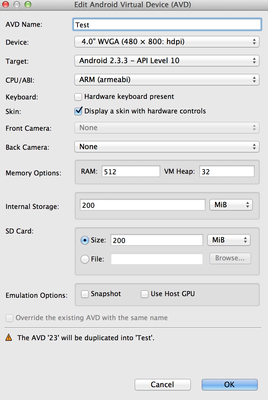 2) You will be able to select this from within the iOS simulator from the “hardware”——>”device” menu. The device simulators available will depend on your version of Xcode.

3) The version of MobGui that is used in the summer school will not work in the community version of LiveCode and this means it cannot be used to build open source software.

With that being said, the new revision of mobGui works with Livecode community so you should be able to build open source standalones with this version.

The following is taken from the mobGui homepage-

MobGui is one option for turning your desktop app into a mobile looking app but there is also the option of manually skinning your app. But at the end of the day it will really come down to personal preference.

With more details of each element being available on out store entries. These entries for LiveCode university and the app design kit can be found below-