If you happen to remember the gist of what you wrote, I'd appreciate seeing it should you feel compelled to write it again, like I did

It was, in essence, a very short version of Craig's thoughts, mentioning that mouse messages are positional. A stack can have non positional messages reach the engine, eg keyDown, keyUp - which may have different results depending on whether the cursor is in an unlocked field or the stack / substacks have focus or not. Whereas a positional *message* is not generated unless the position is in the correct rect. But the *state* of the position is a readable property wherever the position is, so a handler that asks for the values can receive them.
Or so it seems to me.
Top

Well, thanks to both of your replies, I was able to get a better handle at least as to what is going on, and was able to refine some other handlers I was working on to take it into account, but it still seems like bizarre behavior to me, or at least contrary to what I would expect to be taking place

Just goes to show you how much we place on LC's shoulders; how much we assume nearly divine status to that program. It would never occur to any of us to question Excel in this way, that, say, hitting the return key while another app is in front would move the selected cell down one line.

Yes, while I don't use Excel, I would find it equally bizarre if, while (program x) had focus, some other application was intercepting the return key

In this case though, as I outlined earlier, the behavior I find unsettling is that *this* application had focus, but did not pick up the messages.

To put those two statements on equal footing, I imagine that if you have Excel (or whatever) as the foremost program, then any messages passed would be through the focused application, such as mouse movements, entering objects, tab key presses, etc.

What I did not expect was for those messages to disappear into the ether because despite having the focus, the cursor of all things wasn't within the borders of the application.

Obviously, if the cursor is outside of the application, and you click (down/up), *then* I might reasonably assume the actual click event would go somewhere else, but that isn't what we're talking about here, we're talking about simple mouse movement, which at some level Lc *is* keeping track of, so I think it should be reporting it with the one line as written above regardless of whether the cursor is within the borders of the application or not, and probably whether the application has focus or not, but in this case, I can see that going either way.

Hopefully I am not just being too obtuse.

Hopefully I am not just being too obtuse.

You are not, I see the difference as you state it.

It must then just be how the engine works. It will not send certain messages, like "mouseMove", unless the cursor is in bounds. In the stack script:

That is indeed very close to what I wound up with. Just to take all the mystery out of it, the application is a clock/calendar/timer of sorts, and uses mouseDown/Up events to start / record the timed parts. 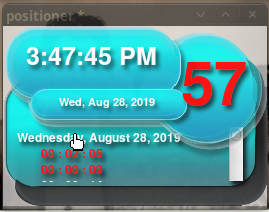 The relevant code, thanks to your direct suggestions, turned out to be put into mouseMove with checkRect handling the actual decision of whether the mouse was over the stack or not: 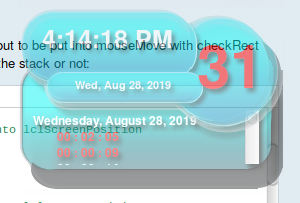 The whole setup is designed just to not have to write the window shape moving handlers.