In a post in a different part of this forum, -hh asked me why I wasn't on the use-list email list, to which I (somewhat jokingly) answered ~

Of course, other than what the acronym means (Really Simple Syndication), I never really looked much into it. I know basic css and html, but never really got involved in xhtml, xml, or any of the .js and stuff because i really am, you know, lazy

Of course, I think I found the laziest way out I possibly could. While hardly a ground breaking program, it *is* good enough at the moment to peruse the mailing list. I really can't believe I did not do this much earlier.

This is the very early not quite alpha prototype which of course is using nothing more than the htmlText feature of the field (yes, I know it isn't feature complete, but I am pretty sure I can correct the deficiencies in formatting by using other regular tools available in Lc's language).

I think I spent the better part of a half hour trying to figure out why I couldn't filter a variable without space (which is more time than I spent writing the code AND making the interface, and I still haven't figured out, if anyone knows, I'd love to hear it!), so the code (such as it is) after 10 minutes is -

Well, here's another chap joining the line of slow learners.

Thank you for that!
Top

Heh, well, yes I did in fact try opening that, just apparently in the wrong versions of the IDE

You might remember that I tend to work mostly in earlier versions of the IDE and Mc (which does not include it). The first time I checked that plugin was in 2.2.1, and again in 3.x, 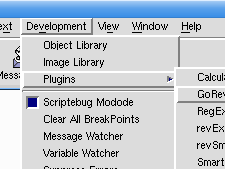 Which produced this result, 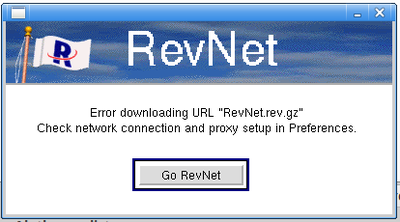 So when I saw that same plugin in later versions, I just assumed it would produce the same results. I never bothered to look into the plugin, since I do have enough to keep me busy as it is

and I almost never crack open the 8.x and up versions, so I didn't know you even changed the name

However, I did now find out that plugin started working again somehwere around the 5.x or so period, because it shows up in 6.0... 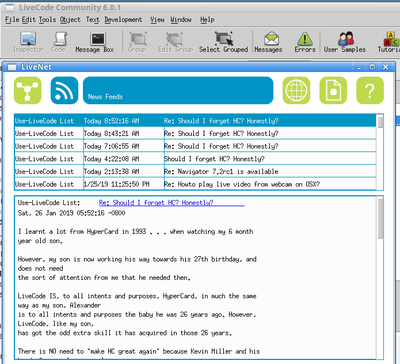 Your version sure does outshine the heck out of anything else I looked at so far, so I will be taking a very close look at it (now that I know it works

), fantastic work there Richard! I suspect your also behind the nabble stuff I've come across eh

*Edit - The question still remains on filtering, maybe I should spin off a different thread on that one though.

I don't know if the email address for bug reporting in the help section is still valid, but you have a email waiting there if it is 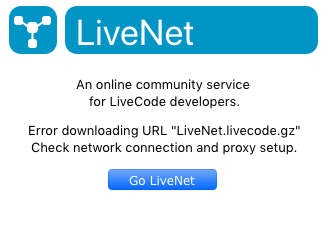 It works now here too. Thanks.

Oh, Richard:
You could think about adding "livecodeshare" to your LiveCode-Tab of Help?
shiftLock happens
Top

I considered it, but the mother ship was very insistent that they were very close to shipping the replacement of for LiveCode Share/RevOnline/whatever else it's called.

Maybe I should reconsider.

The limit for LC's plans are the sky but a lot simply disappears in the clouds.
Probably we have LC 10 before 1/3 of the following is realized for LC 9.
(Screenshot from LC Global, Nov 2018) 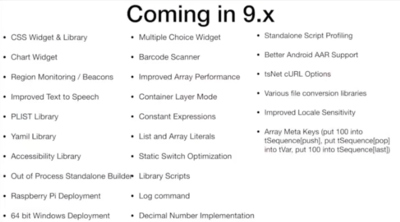 Let's imagine, just as a mental exercise, a company that, recently got itself in the financial sh*t,
and, as a way out of this, moved its headquarters (think lower-rental area) and cut staff
members, and, having done that found out that life is never quite that simple, and,
after a stumble, getting up-and-running again is a rather longer process than one had
anticipated . . .

Or; to tell you another story:

About 10 weeks ago I started getting rather unpleasant pain in my right shoulder, and
when I went to the doctor 4 weeks ago he told me I had something called "Periarthritis"
and to sort it out would involve 2 extremely painful cortico-steroid injections into the
joint followed by 3-6 months of daily physiotherapy.

When I said something about, "Oh, surely all I need is a spot of ointment" he made
a fairly coarse remark!

Now, to return to my initial mental exercise . . .

Let's suppose that company found out that by making all sorts of great and glorious
promises it had over-extended itself. Now that that company is doing its damnedest
(and it probably does feel fairly "Damn" and "unfair" right now) to pull itself up by
its bootstraps, it finds that it has to either:

1. Conveniently become extremely "vague" about very many of the promises it
made previously,

2. Delay implementation of those promises to such an ill-defined time in the future
that there is a a risk of them becoming forgotten completely.

Now, were I a client of that company I would feel a certain amount of ambivalence
towards its situation.

1. I'd feel sorry for it that it and its directors had allowed itself to get in the sh*t.

2. I'd feel slightly cross if I felt that that company was not being entirely frank with
both its shareholders and its clients.

3. I'd also remember St. Thomas, who really didn't swallow the whole "Here's Jesus alive,
having been dead" thing until he'd poked his fingers into various places.

Now just how mental (or "mental") that exercise is I'm not able to say.

Having seen promises made by a variety of setups (The HyperNEXT situation where
the developer categorically stated that there'd be a Linux version, which, after a bit
of "poking", after 4 years of nothing appearing, admitted he just wasn't up to) that
have not been kept owing to all sorts of unforeseen situations, all I can say is that
I'm extremely happy that LiveCode as it is at present already offers one hell of a
lot more in a hell of a lot more accessible fashion than many "also-rans".

@Richmond, your speculations are very much off base. In fact, LC is doing exceptionally well right now and future prospects are rosy. That one bad year is behind them.

Delays are due partly to keeping up with unexpected OS changes on several platforms, and mostly due to work on features that are paying the bills. For those who use only the free OSS version, you're last in line. In fact, that's one reason the company is doing so well. Those who need advanced or additional features are willing to pay for them.

your speculations are very much off base

I am, oddly enough, extremely glad that they are.

One of the reasons I indulge is speculations from time to time is
because LiveCode can hardly be described as pellucid.

I should like to point out that there are "freeloaders"
and those who contributed to various fund-raising efforts
such as the Kickstarter (for which many things were promised
that have yet to materialise).

And, also, my own case, where I have held a variety of commercial licences over
the years paid for by other people who have given them to me as a way of signalling
appreciation of various non-financial contributions towards LiveCode.