P.S. I need to prod our maintenance team to make sure master-* is kept up to date whenever we release a point release - they are lagging a little behind.
Top

Given the current situation, I doubt I'll be submitting any more pull requests. Certainly not against the develop branch, since there's no way for me to test anything - LC8 does nothing but crash.
PowerDebug http://powerdebug.ahsoftware.net
PowerTools http://www.ahsoftware.net/PowerTools/PowerTools.irev
Top

As far as I'm aware, no other Linux user experiences the problems you do (although admittedly I'm making the assumption we would have heard about it) and we build from source in the office on a variety of distributions without any problems whatsoever.
Top

OTOH, I've got LC8 installed on OSX 10.10.4 with my usual arsenal of third-party plugins and it's more stable.
Still crashes occasionally for no apparent reason, but it's an alpha build so no worries there.
PowerDebug http://powerdebug.ahsoftware.net
PowerTools http://www.ahsoftware.net/PowerTools/PowerTools.irev
Top 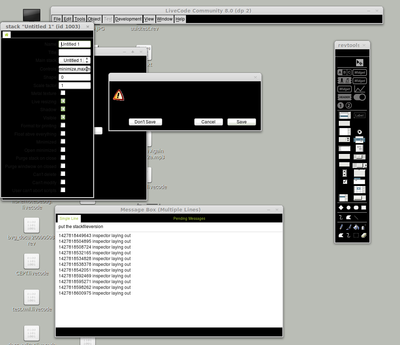 Ah, is that DP 2 installed, rather than running from the current develop branch? I can't say I've ever seen anything like that, but there was a problem that seemed to be fixed on relaunch in DP 2. There have been a *lot* of fixes to the IDE since DP 2.
Top

Yep, that's a virgin installation of dp2. No third-party plugins, nothing that isn't part of the installation package, otherwise clean resources directory.

Glad to hear that there have been fixes. It's been several months now since a dp release.
PowerDebug http://powerdebug.ahsoftware.net
PowerTools http://www.ahsoftware.net/PowerTools/PowerTools.irev
Top

I had the mistaken impression you were building from source. Obviously since none of your problems seem to have been reproducible, it'll be sheer chance whether they have been fixed in dp 3.
Top

<sigh>
I can build it from source (from the current develop branch), and that's what started off this current discussion about the different develop branches, the prebuilt directory, and their lack of coexistence, but it's in a separate build directory. Aside from launching it once from there and discovering that develop now builds LC8.0, I haven't gone back there.
PowerDebug http://powerdebug.ahsoftware.net
PowerTools http://www.ahsoftware.net/PowerTools/PowerTools.irev
Top
Post Reply
56 posts