I think the word 'cheapskate' is best avoided as it has some fairly negative connotations.

Let's stop and try to develop a taxonomy of LiveCode users who don't put money into the company:

1. People who don't have sufficient income to buy any of the commercial versions of LiveCode.

2. People who don't have sufficient income to donate money to LiveCode.

3. People who earn pots of money (a lot of it from using LiveCode) who don't put money into LiveCode.

Category 3 seem to be classifiable as 'cheapskates,' although quite why one needs to bandy
offensive words around like that beats me; it certainly will not make those people suddenly
shell out their millions; merely put their backs up.

As a person who, in the last 18 years has managed to earn $600
directly from products made using LiveCode, and ploughed about $150
back into the company, I may have, proportionally, put more money
into LiveCode than anyone else on this use list.

Today I taught a class of young programmers; now we spent about
45 minutes working with LiveCode on Linux, 45 minutes working
with BBC BASIC on MOS (the operating system in BBC computers),
and another 30 minutes looking at MicroSoft BASIC.

For that class, after the usual deductables (electricity, rent,
amortisement on chairs and other crap, tax . . .) I earned
the princely sum of 30 Euros. How much of that is "owed" to
LiveCode to keep several foul-mouthed types from calling me
a cheapskate I just don't know. Actually I spent most of that
money taking my wife out to lunch.

Also, lest we forget, LiveCode IS available as Open Source Software;
and having "let the cat out of the bag" you must live with the
consequences. I do not believe LiveCode would have a higher income
had that not done that.

If LiveCode spent a lot more time on seriously targetting
the Education sector (their natural 'home' sector) instead of what
they are doing they might find their income went up.

The much vaunted LiveCode 'Community' might become something resembling
a community if its would-be members did not use offensive words, especially
in cases where it is not always clear the name callers know anything about other
LiveCode users financial situations.

Come to think of things, probably the only financial situation of anyone hereabouts
that is known is mine.

Wow, and I didn't even crack a joke this time

Back to McFly-a-card, I am now working all the way back to v2.3~! Thanks again Richmond!

I am surprised at a few things, one of the most interesting being that the script editor included with 2.3 to 2.4 is pretty marginal for use at all, it really highlights all the work you guys put into it after it went OSS.

I was a little disconcerted to find words disappearing as I was typing them in, rearranging themselves and other.... interesting glitchy behavior. Fascinating trip down the historical record!

Another thing I found REALLY interesting was that the original linux executable still works perfectly (as far as I could tell from the 2 or so hours I was using it today). Amazing.

MC's editor did very little work during typing. Do you have a recipe for that? I wonder if any of what you saw may affect other fields.
Richard Gaskin
LiveCode Community Liaison
LiveCode development, training, and consulting services: Fourth World Systems
LiveCode Group on Facebook
LiveCode Group on LinkedIn
Top

Well, I don't have a real recipe, I was only typing and as I went, I noticed some oddities start showing up. Copying and pasting came out much worse.

Since it happens every single time, I suppose the recipe is just start typing, and eventually you'll see it, or copying a block of code and paste it, you'll DEFINITELY see it. 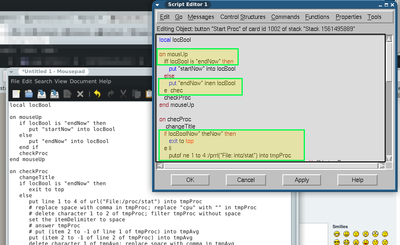 As I say, I saw a *lot* of edits made by yourself, and Klaus in particular, and I know that the editor in the OSS versions is far more stable than this one, although this one seems almost too simple to mess up.

I noticed similar behavior in RR 2.x and 3.x, although those editors are far more complicated, so I assumed it took some time to work out the bugs.

I'll have to play with it on the Win vm, and see if the same issues happen there. If they don't, it might just be something quirky in the 'nix engine.

*Edit - it doesn't seem to happen in the Win version, so I'm thinking it is a nix engine issue only.

The script editor on 8 series (and 7 and 6, somewhat) Windows versions was pretty dire. Often literally unusable. (30 seconds between keystrokes to text appearing on screen. Pasting code into places the cursor had been "significant timescales previously" - I mean more than a minute.)
9 series is better, occasionally has some problems, but thankfully loads better. None of it I have found to be reproducible on demand or with a recipe.
Top

That is interesting, I don't fire up the Win Vm to program often, but I have a few times. I guess I haven't spent long enough in that environment, I didn't notice any of those issues. Of course, I'm sure if I were using that environment full time, that might make it a different story

The script editor on 8 series (and 7 and 6, somewhat) Windows versions was pretty dire.

That is interesting, having used the scriptEditor all the up way from RunRev 1.1.1
and never noticed a glitch on Macintosh.

I don't know "what the what" is with LiveCode just now, but I did notice,
when I visited their offices about 8-9 years ago that almost ALL their work
did seem to be done on Macintoshes.

I have asked them questions relating to Linux in the past and been informed
that they have one test machine running Linux!

That makes me wonder how many machines they have with them running
a variety of Windows.

(How much of this dislike is logical and how much of it is
simple prejudice I'm not sure.)

. . . However, I have access to machines running Windows XP, 7 and 10
so that I can test drive versions of my Devawriter Pro. Personally I would
feel a right plonker if I did not test Windows versions of Devawriter Pro
before I released them.
Top

While playing around with these various older editions, I've noticed there were a lot of different variations on exposing different parts of the language, even in the most basic version of the script editor.

For instance, these are screen shots of the Mc 2.3 script editor -

Messages, commands and functions OH MY!

You even get by default the option to run an external editor, which can be set in the preferences. As old as this editor is, I can see a lot of advantages to this layout, the primary one being language discovery and the secondary one being a primitive version of auto-complete (the "control structures" fills in the structure for you, for instance).

All in all, a very nice surprise for me.

. . . a while back, a certain programmer decided he didn't like the MetaCard IDE,
so he designed his own, and, eventually he became Victor Kiam, "I liked it so much
I bought the company."

Of course, there is no reason why history cannot repeat itself; one could imagine having
a "Runtime Revolution." 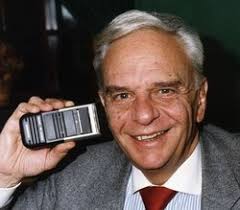 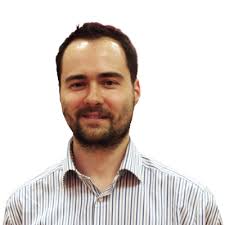 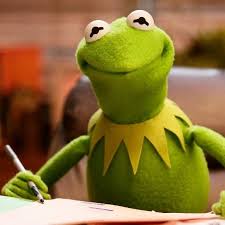 -
At least one of these people 'bought the company.'
Victor Kermit Kiam, Kevin Miller, Kermit the frog.

Further nosing around lead me to this interesting stack (and a few others, like a 2003 version of Jacque's "Klondike" solitaire game). 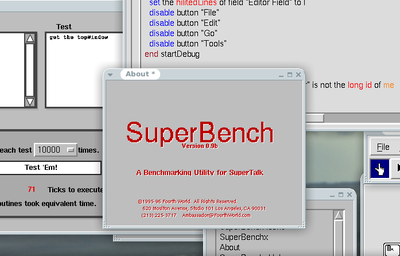 
Interesting to note that while the stack opens in the much older versions (2.x Mc), it does *not* open in the moderately later versions (6.x and up). Those later versions report the stack as 'corrupted'. There must have been some heckuva bunch of changes made in the progression.

I'm having an extended weekend in our cottage in the hills and enjoying myself
with a 32-bit INTEL iMac running MacOS 10.6.8.

The ecstasy reached new levels when I discovered my licenced copy of RevMedia 2.7.1
on one of my backup disks:
- 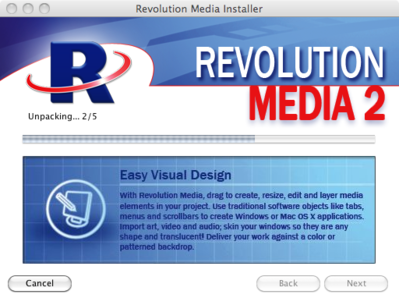 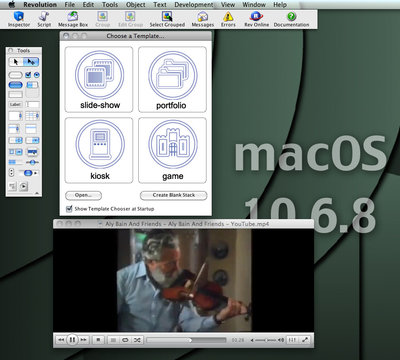 -
That template "thingy" might well be worth reviving . . .
Top 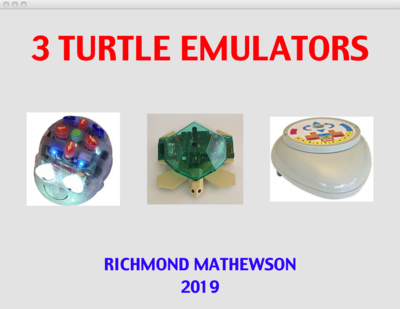 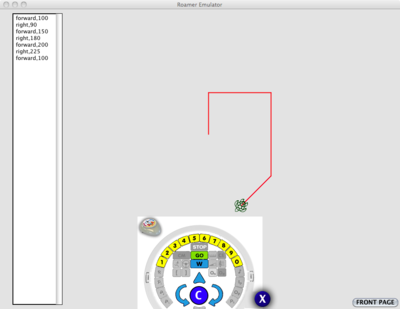 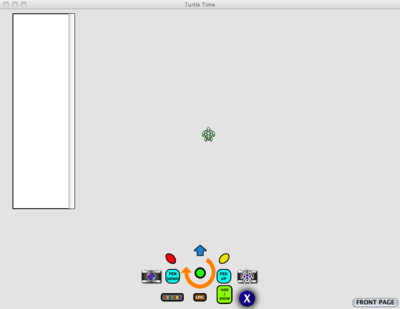 Wow, I had thought that the change to the newer tool palette hadn't taken place until somewhere after 2.8! Now I am wondering exactly where it did take place. Hm. Was it directly after 2.2?

the change to the newer tool palette

I honestly wish I could remember.

What I do remember is that I saw that tool palette for the first time
when I got hold of a copy of Dreamweaver 2.6.
Top 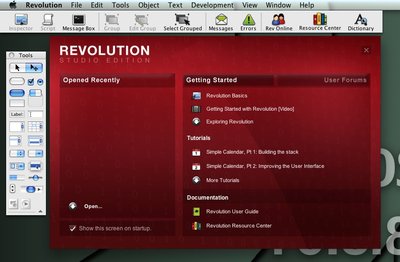 Until you find that the "Exploring Revolution" thing takes you
to the current version(s) of LiveCode.
Top
Post Reply
32 posts