We are pleased to announce the release of LiveCode 9.6.6 RC-1.

- Android app query whitelist
Support has been added for specifying which other apps can be interacted with via the intent and other (custom) URL schemes.
Since Android 11, by default, an app cannot interact with any others due to changes to package visibility. You must now specify which apps you need access to by adding their ids to the App ID Query Whitelist field in the Android standalone settings.


Bug Fixes:
- Opening HyperCard stacks will no longer cause a crash
- Support for the system date and the system time has been added on Android
- A stack's rect will no longer become out of sync with its actual position after being moved in the IDE on macOS
- A wider range of TrueType font files will now work on Android and Web
- Use of the term Tutorials have been replaced by the term Lessons throughout the IDE
- When a runtime error occurs in a context where the script debugger cannot run, the error dialog will be displayed rather
than failing silently
- Conversions between global and local co-ordinates are now correct on multi-screen macOS systems.
- The welcome tutorial can now be started on first run via the Start Interative Welcome button in the start center
- Starting a new tutorial will now close the previous tutorial's stack, if present
- The performance of the script editor while typing has been improved
- Downloading large amounts of data using tsNet on Windows is now substantially faster
- Invalid PDFs will no longer be generated when using the open printing to PDF command on Windows using the 64-bit engine
- Script debugging will no longer fail to work intermittently when running the IDE with pro features
- Scripts which run without locking the screen are no longer slower on macOS Big Sur and later
- The drawing library now correctly handle gradients which are referred to using an id containing - or _
- Key events will now work correctly after a modal dialog is shown from a mouseUp handler in a grouped control
- The iphoneDeviceModel function now returns the correct model string when run on an iOS/iPadOS simulator.
- Default buttons and progress bars will no longer cause unnecessary CPU usage on macOS 10.10 (Yosemite) or later
- The byteOffset function will no longer cause incorrect results in some cases nor cause a crash
- Scripts containing accented characters will no longer incorrectly report being externally modified
- Using the print link command when printing to PDF on Windows no longer causes a crash
- The copyright notices in the engine app bundle (macOS) and exe (Windows) have been updated
- A significant memory leak in the browser widget on macOS has been resolved
- POST data larger than 64kb is now parsed correctly by the Windows server engine
- Audio-only players no longer consume excessive CPU when in Edit Mode on macOS Big Sur
- WebGL content now displays in the browser widget when running on macOS 12.x (Monterey)
- The union (and other set operation) commands now throw an error if there is no into clause and the target is not a declared variable
- Building iOS apps using Xcode 13.2 with the iOS 15.2 SDK is now supported
- Local file and content access has been re-enabled in the browser widget and native control on Android
- Touch events now occur at the correct location when handled by objects underneath a disabled Android scroller
- SVG elements with a stroke-width of 0 are no longer drawn with a hairline stroke
- There is no longer a delay when opening the IDE menus on macOS
- Selecting a specific browser to test a web project against now works correctly
- The overhead of using "do .." to evaluate long JavaScript scripts in the browser widget on Android has been greatly reduced

For the full list of all fixes, updates and enhancements please see the release notes:
http://downloads.livecode.com/livecode/ ... 6_rc_1.pdf


Known issues
============
- The Browser widget's native layer is not shown in some Linux distros with Cinnamon window manager.
- The use of the Browser widget is not supported on Ubuntu 18.04 64 bit LTS yet.


Required Software
=================
To build iOS apps with LiveCode you must have the appropriate versions of Xcode as follows:

There is a full list of working LiveCode/macOS/Xcode combinations here:
https://livecode.com/docs/9-5-0/faq/faq/

Note: Whilst we endeavour to release updated versions of LiveCode supporting the latest Xcode/iOS SDKs as quickly as possible; we strongly recommend disabling automatic update of Xcode or downloading the specific version of Xcode required directly from the Apple developer portal and installing it separately.

Important: From the start of April 2021, Apple is only accepting apps built using iOS14.x SDKs. This means that, if you wish to submit apps to the AppStore you will have to be running at least macOS 10.15 in order to be able to install the necessary version of Xcode.


Feedback
========
Please report any bugs encountered on our quality center at http://quality.livecode.com/


Have fun!
The LiveCode Team
--
Top

The number of bug fixes and new features is impressive.

I was able to download a licence file via my LiveCode account, but it was not accepted, so I had to use the online system:
- 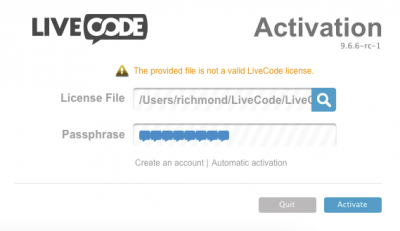 -
This was not the end of the world, but that is because, as it is not the season for Richmond's LiveCode classes,
I do not have to install this on 12 Linux boxes; which is what I will do, come May/June.
Top

I have just tested the offline activation, and it works as expected for me.

Could you please try again?

Maybe it was an instant glitch or something.

Sorry: Christmas got in the way.

After a 15 minute download time (which surprised me as the first time I downloaded,
the other day, it took about a minute) . . .

Installed it in an "off-site sin bin" (i.e. a folder on my desktop, so as not to interfere with other LC installs) . . . 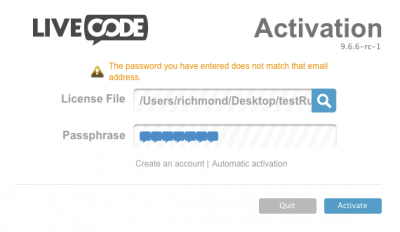 -
Presumably this is so I do not try to install LiveCode on 4,500 machines with that licence file. 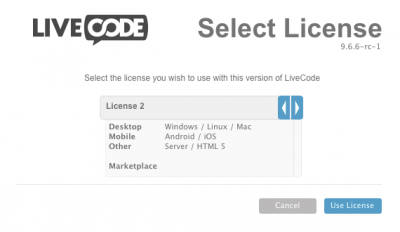 -
It might be an idea to have an explanation how these things work somewhere so that end-users know what is going on.

Also, as I can, quite obviously, not use an offline licence file, my account should be set up so that option
is not possible, so I (and others with similar licence agreements) do not spend some time getting confused.
Top

Richmond, if you are still having trouble with offline activation, please contact support@livecode.com. I can see a couple of potential issues in your screenshots but licensing issues are definitely best handled in support.