manjaro: »Where is LiveCode?«

manjaro: »Where is LiveCode?«

i can't imagine that installing LiveCode is more complicated than setting up the system itself and all other applications?
I also have to admit that I come from the mac side and am not an experienced Linux user.

With a few tricks i was able to run the LC installer successfully, but with the best will in the world i can't find the application?
There is no link in the menu or on the desktop and i have searched all typical locations, including invisible objects, but apart
from the installer itself i can't find anything that would point to »livecode« or »runrev«?

What am I doing wrong here? Does LC even run under manjaro?
Top

Installing it isn't overly difficult, although it is a bit more involved than on OSX.

stoltenberg wrote: ↑
Sat Mar 13, 2021 4:30 pm
With a few tricks i was able to run the LC installer successfully, but with the best will in the world i can't find the application?

Some questions about when you ran the installer will help answer your questions.

When you ran the installer, did you choose "All Users", "Just You", or "Custom" ? The answer to that will tells us where it is located, unless you used "Custom".

Thank you for the fast help! I choosed the installation for my user only,
since the option for all users failed.
Top

What desktop are you using?
XFCE, KDE, GNOME or NET?

On my laptop that is currently running Xubuntu (i.e. Ubuntu + XFCE) LiveCode versions installed under 'Just You'
(and I have run into lots of difficulties on several Linux distros with 'A'' Users' and 'Custom')
appear under 'Developers'.
- 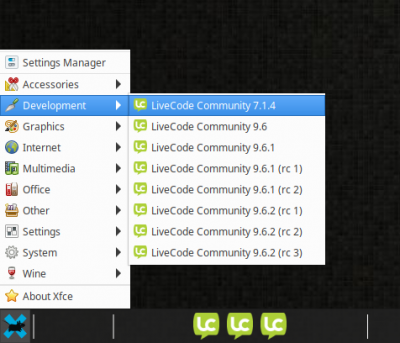 Installing it isn't overly difficult, although it is a bit more involved than on OSX.

You set the executable bit of the installer and click on it . . . not rocket science, especially if you have
used UNIX or Linux for more than just sending Granny the odd email.
Top

Manjaro ships with XFCE by default. I always assume that unless someone specifies a different desktop they're using their distro's default.


You set the executable bit of the installer and click on it . . . not rocket science, especially if you have
used UNIX or Linux for more than just sending Granny the odd email.

Most Linux users rely on their distro's package manager, both for convenience and security. Given the overwhelming preference for package managers among Linux users, LC's distribution as a Windows-style installer is highly unusual.

In fact, it's so unusual that most OSes provide no guidance on what do to with the file once it's downloaded, such as the required step to set the exec bit. Guidance (and often nice tooling) is provided for the native package manager, so it's not at all unusual for even an intermediate Linux user to not know what to do with each type of file that may be downloaded.

Being an Arch derivative, Manjaro uses the Pacman package manager. And despite the many strengths of the Arch family, it's less popular than the Red Had or Debian branches, and so app devs build fewer Pacman files than they do for Fedora or Ubuntu.

There are some tools for converting Debian .deb packages into Pacman files, and I'd guess most Manjaro fans are at least aware of them.

So if LC's Linux version were distributed using a with-the-grain approach of the most popular package manager as a .deb file, this question wouldn't keep coming up in the forums and on the list as often as it does. Indeed, if memory serves both you and I had the same question once upon a time.

I've advised the team to consider making a .deb package for LC, and even offered to set up and maintain an Ubuntu PPP for Stable builds to become available in the Ubuntu app store if such .debs were maintained.

But understandably, given both the smaller market share and the disproportionately small segment accustomed to paying for developer tools in the Linux world, any additional expense for packaging on top of the already-disproportionate expense of maintaining the Linux version is, from a purely direct-revenue standpoint, viewed as undesirable, esp. given the complexity of adding a .deb packaging unit into their sprawling complex multi-platform automated build and testing system.

And so it is that from time to time this question will come up. Please understand that those asking the question are doing so with the best of intentions and often with considerable experience behind them (this is LC's inconvenience, not theirs), and it is in our best interests to offer helpful guidance without implied judgement of their technical expertise.
Richard Gaskin
LiveCode Community Liaison
LiveCode development, training, and consulting services: Fourth World Systems
LiveCode Group on Facebook
LiveCode Group on LinkedIn
Top

stoltenberg wrote: ↑
Sat Mar 13, 2021 4:57 pm
Thank you for the fast help! I choosed the installation for my user only,
since the option for all users failed.

Installation for all users does indeed fail if you are not installing with elevated priviledges (either as root, or by use of 'sudo'), so installing for your user only is a better choice in the 'nix case. You can either -
...open the folder with the version you want to launch, and click on the file that says "LiveCode Community.x86_64", or....

...as Richmond's pictures show, you should find the menu entry under the application menu's "Development" sub section.

If you don't have the sub menu, I would either setup a short cut in the panel the menu is in, or right click on the file in the folder you navigated to above and send a short cut to the desktop.

I would say that in all the distributions I've tested on, I have not seen one where it did not wind up in the development sub menu, desktop manager not withstanding

richmond62 wrote: ↑
Sat Mar 13, 2021 5:56 pm
You set the executable bit of the installer and click on it . . . not rocket science, especially if you have
used UNIX or Linux for more than just sending Granny the odd email.

To be a bit more consuming than
1.) click installer
or
2.) drag from location to application folder

Thanks to all of you, especially for the detailed and helpful answers. In any case, i didn't want to cause trouble or excitement, that's far from me.
And maybe i hadn't expressed myself clearly enough: The installation was successful (according to the feedback), i just can't find the installed application (directory) anywhere. To set the executable-checkmark on the installer was not a particular hurdle in fact .

Incidentally, i had decided to install just for myself, as i got stuck with the installation for all users - my admin password was requested again, but it was always rejected as incorrect. (A problem that other users apparently already stated here.)

Yes it's true, i use the edition with xfce. I followed your paths, but there is nothing (even with show hidden files).
In the meantime i suspect that the installation process was not successful, contrary to what was reported. Should i just try again?
Top

... i was a bit impatient and downloaded the installer just again to be on the safe side.
I can hardly imagine that it could have been due to a defective download, but what can I say,
this time it worked right away :-) Also the entry in the start menu was created successfully this time.
So again my best thanks to you guys!
Top

Glad to hear you resolved it, I was about to link to a typical installation to see if you had experienced something different heh.

As far as I can tell, I did everything right with the installation. Can't say why the first time the success message was shown,
but apparently nothing was written to disk. Let's book it as a minor and exotic problem that won't come up again :-)
Top
Post Reply
10 posts • Page 1 of 1