Just updated Android SDK manager and have lost location of SDK root in preferences. Tried everything I know and scoured the forums.

SDK path is listed as C:\program Files\Android at top of manager screen.

update: found other posts on forum. Am rolling back manager to previous version. hope this works!
Returning to try to learn livecode again.

But much greyer at the temples than the last time.
Top

I cannot find the folder that contain the SDks needed for Android in the preferences of Livecode. I have downloaded the the necessary SDKs , but Livecode will not accept any folder I pass to it.
Top

After downloading the android SDK, I tried to follow the directions on the Android website, which made no sense to me:
Unpack the ZIP file you've downloaded. By default, it's unpacked into a directory named android-sdk-mac_x86. Move it to an appropriate location on your machine, such as a "Development" directory in your home directory. ( Where is this?)

Make a note of the name and location of the SDK directory on your system—you will need to refer to the SDK directory later when using the SDK tools from the command line. (What command line ? Where? What does this mean? How come the SDK download android-sdk_r24.0.2-macosx does not contain an SDK folder? How come I cannot find "SDK" folder in my mac?)
Top

I have downloaded every SDK file and Dev app for android, looking for the SDK folder that Livecode will accept into it's preferences. No luck.

Is there anyone who has successfully linked the SDKs files to Android who can give me a tip?
Top

Livecode says this:
Unpack the ZIP file you've downloaded. By default, it's unpacked into a directory named android-sdk-mac_x86. Move it to an appropriate location on your machine, such as a "Development" directory in your home directory.

The android-sdk-mac folder has nothing in it which will connect to the Livecode Adroid SDK preferences.


Simon
I used to be a newbie but then I learned how to spell teh correctly and now I'm a noob!
Top

I've just installed Android on my mac today and found the process non-intuitive at certain stages (I had a weird Java bug to sort out and the Android SDK Manager only displays it's 'Tools' menu if you click away and then back to it...) - I never quite got to the stage of beating my head against the wall but it was annoying at times. 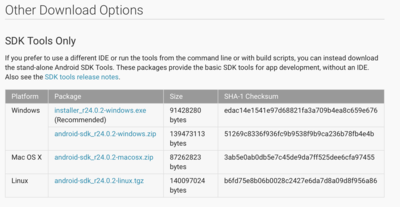 When they mention the 'SDK folder' I think they mean that root folder (in your case "android-sdk-windows"). When they mention a folder such as 'Development' I think they just mean 'put it in a folder somewhere safe that isn't in Program Files (I was installing on a Mac so I copied "android-sdk-macosx" to an "Android" folder I created in "Documents". Note: when they mention a 'Home' directory that is a directory you get on Macs - it sounds like the instructions you've got are pretty Mac-specific - so for the bits that don't make sense on a Windows system try to imagine what they might be (or ask here).

Thanks Dave and Simon,

I got it. The video was great. Alot of things I needed to do after clicking on the "Android" file to open the manager. I could not find this info anywhere else.