Hi, I am trying to recreate an old fashioned "hypercard" flip card animation. There is an old hypercard stack that animates a gasoline engine with its piston cycling in the cylinder. In this hypercard stack there is a background button with a simple script that goes to the next card on mouseStillDown, so the cards flip as long as you press and hold down the button. I imported the stack in an old version ofLiveCode and it ran, but slowly, while the current version doesn't keep the card flipping going. Is there a way to do this in LiveCode? Seems like it should be simple but I'm obviously missing something.
Top

There should be little issue with converting a HC stack to an LC one, with the usual caveats about certain structural changes. Perhaps the HC stack used the background object? This, of course, does not exist in LC.

Perhaps either of these, assuming you have 15 cards:

I prefer the second. It seems more robust. This requires that you click on a button, ostensibly on cd 1. You may not want to be restricted to that, and place this handler in the stack script, or however you want this to work.

EDIT: Do you know how to add effects to this sort of thing?
Top

HC importing is always a bit weird, as you've discovered by having to resort to an older LC version.

To start with, now that the stack is imported, I'd set the hcAddressing of the stack to false. That will help if you're looking at the stack in the Project Browser.

You'll also no doubt find that the animation is faster on the second time around if the images are cached in memory from the first lap. If that's true then you might want to do a quick invisible trip through all the cards on stack startup, i.e.,

...of course, I think the fastest thing would be to change the stack so that it just changes the displayed image on a single card rather than flipping through multiple cards.
PowerDebug http://powerdebug.ahsoftware.net
PowerTools http://www.ahsoftware.net/PowerTools/PowerTools.irev
Top

The above 2 methods are comprehensive and well demonstrated. i'll add a third way that, to use a modified quote from "The Matrix", will blow your mind when you realize the stack is the button. I actually included some niceties, like a message to tell you when it is animated and when it isn't. I spent a long time on this one, about a minute and a half on the code, and maybe another minute dregging the juggler images out of the Metacard compatible icons

cardanimationdemo.livecode.zip
Are you feeling animated yet !?
(1.55 KiB) Downloaded 45 times

OTOH, why bother with cards? Just show/hide the images.

*IF* you were asking me, I completely agree that I wouldn't use cards for an animation of almost any kind under normal circumstances, although there are exceptions I can think of to that rule, they would be few and far between.

In this case, I was using cards merely for the purpose of demonstrating (one) way to accomplish doing what the OP was asking, not so much about actually using a stack from HyperCard per se, but this part in bold / underline ....

Hutchboy wrote: ↑
Sat Jun 27, 2020 7:39 pm
Hi, I am trying to recreate an old fashioned "hypercard" flip card animation.
... there is a background button with a simple script that goes to the next card on mouseStillDown, so the cards flip as long as you press and hold down the button.
Seems like it should be simple but I'm obviously missing something.

Frankly, you can see I sure didn't use the button for this, although there might have been a purpose for it in the original stack, I can't imagine why you would want to hold a button down that long (or short).

I'm not sure what happens to the message path once you've moved to a new card if you're working with a mouseStillDown handler in a background group.

I looked askance at that as well, from the very start. A test;

stops, as we both surmised, at cd 2. There is no target any longer from which that handler can continue. Of course, we do not know what mouseStillDown handler the OP actually wrote, since HC would have acted similarly, and apparently it worked back then.

@Hutchbiy. Surely you get all this. What did you write, that the mouse, after the very first navigation, is no longer under the target button which started the whole thing? Where do any new "mouseStillDown" messages come from? 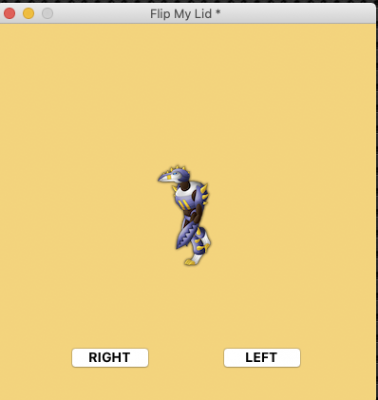 I've been using that trick to teach Primary school children animation for games for at least 6 years.
Top

I always do this by setting the ICON of a button, this way we don't need to take care of TILEing, which happens when you use an image as backgoundpattern.
Top

And here's an old animation technique using a single image containing all the cels of an animation.

And here's an old animation technique

Indeed there is, and very clever it is too, and possibly useful with the accursed sprite sheets,

BUT considerably more complicated than flipping backGroundPatterns in a graphic frame.

I got that idea by remembering been shown a film like this when I was 8 or 9 at Primary school.

Oddly enough, most of "my" bright ideas seem to come from years 5 to 11 of my life.
Top

Oh, and by the way, I have nothing but good things to say about these people:

Hi all and thanks for the suggestions and examples. I am working through all of them but, as a challenge, I am still trying to implement a single control that, when held down, flips through all the cards in a stack. I looked at an old thread on a "show all cards" discussion I was involved in a couple of years ago and have been exploring an animation-across-cards stack that was attached. That example sets and checks for an animation flag (implemented as a custom stack property) and then calls a stack script that goes to the next card and then calls itself with a send-in-time message. Using that scheme, I have created a stack that flips cards on mouseDown using a background behavior-grouped graphic which cycles through all of the cards. In a mouseUp handler within this same control I clear the stack animation flag which stops the card flipping. The whole thing kind of works with a couple of big exceptions: 1. I found that no matter how I set the boundary of the scripted background group the card flipping happened even when I clicked outside the graphic control. I was able to fix this by covering the card with a separate background graphic group layered at the back. 2. Now everything seemed to work and I thought "Success!" but, no such luck, if I held the mouse down the card flipping continued but on mouseUp it was not stopping the animation once it got going. I finally resorted to adding a separate control to stop the animation...although that's not the behavior I want.

For the time being I have given up on trying to use a "mouseStillDown" handler like in the original Hypercard stack...mainly because I never see this message show up in message watcher so don't have a clue as to what that handler might be doing and I think I understand that in LC it loses its target when you change cards.

If I can figure out how to add an attachment I will post the stack I made. I'm still working on the problem (kind of stubborn that way.) Next step is to see if I can find out how LC handles the "Show Cards" command under the skin.

Thanks again for all the great input. Mike
Top
Post Reply
21 posts