I want to build a "Koch-Curve", but I don't find a possibilty to change the direction and the length of a line within the code. Who can give me a hint ?
Thanks Nobbi
Top

You couldn't do that with the line, you would have to use something like the freehand polygon tool instead, where you'd set the points until you eventually reach the koch snowflake level. 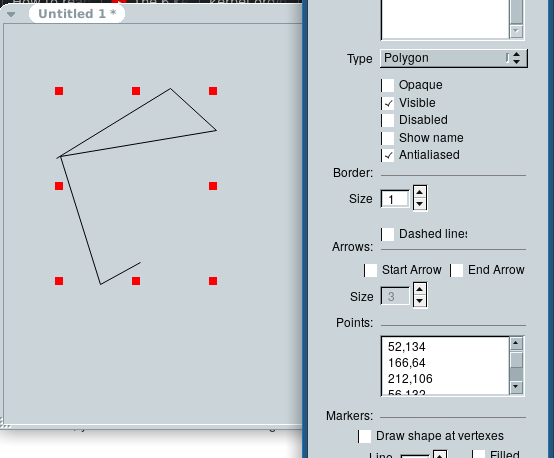 You have to use a graphic of style "Polygon" that displays your Koch curve.

The following function gives you the point that has length L and angle A from (0,0).
It is the core for building shapes like a Koch curve.


Now drawing a Koch curve is a (recursive) matter of math. You'll come fast to the LC lines you need if you start with exercising to draw (parts of) different n-gons.
If your length segments becomes too small there may arise numeric problems (and thus display problems) from the fact that LiveCode converts the coordinates of your computed points to integers.
[Nevertheless we should always set the not-rounded points as above to keep the overall rounding errors small.]
Have fun!
shiftLock happens
Top

Hello -HH, many thanks for your example. I have tried to modify it and developed the "Initiator" and the "Generator for the Koch-Curve. I understand the structur of a recursiv function, but I don't know, how to verify it in LC. Have I to use a "function var1,var2" or a "command zeichne winkel,laenge" ? The last item shows nothing.
Thanks for your hints.
Nobbi
(H&H is an important software-lab in Göttingen, still existing ?)
Top

The KochCurve is due to integer rounding of the points more exactly drawn (less rounding error) if you use the following routine (instead of "turtle" like walking by length and angle):

Divides the line from point p1 to point p2 into a "Koch"-segments (see the attached images):

Find attached a sample stack that does the above.
Note that we can have at most 7 iterations because either the length of the segments becomes too small or the number of points grows to more than 65535 (which is the max num of vertices a LC-polygon can have).

As an exercise you could do the same with adding points by angle and length (you only have to modify the drawstep but it needs more scripting).