WTH?
Can anyone translate what this means?
Thx!
Top

What does the field on the right say when you click on the v9 dp6 button?

But I'm still curious to know what the DP text says; hopefully it notes that it's a pre-release build.

The team is quite active, with new releases coming out every few weeks. If you don't want to get notifications of new builds that become available you can turn those notifications off in the Updates section of LiveCode's Preferences window.
Richard Gaskin
Community volunteer LiveCode Community Liaison
LiveCode development, training, and consulting services: Fourth World Systems: http://FourthWorld.com
LiveCode User Group on Facebook : http://FaceBook.com/groups/LiveCodeUsers/
Top

You can turn off your misery in the LC preferences: 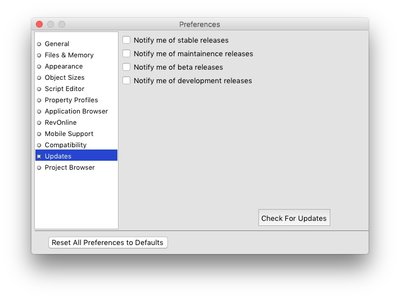 Thanks much Richard and Klaus ! Very helpful!
Top
Post Reply
4 posts • Page 1 of 1