A 'RaspberryPi stack' is, that is the criterion for this collection, any LC stack that is fast enough to run 'smoothly' on a RaspberryPi B and later.

There are a few stacks only, that require RaspberryPi hardware or special additional software. There are/will be a few, that are using GPIO or peripherals (webcam, mini display, camera).

So nearly all of the following stacks will also run (much faster) on all platforms supported by LC.

LC-IDEs for the RaspberryPi are available HERE.
(Thanks to Fraser Gordon from LC-staff.)
For installing and handling some problems see the 'FAQs' of this sub-forum.

The LC 7.0.4 IDE (only) allows (also on Mac/Win/Linux) to build standalones for RaspberryPi.

I've learned a lot in trying to improve scripts for gaining speed on such slow CPU's. What gives some milliseconds only on a 3 GHz Linux box can win a full second on RaspberryPi B (800 MHz).

Have as much fun with the stacks on Raspi as I have!

I lost oversight, a table of content may be also comfortable for you, I'll insert one every 69 stacks :-)

LC on Raspi has, incl. version 7.0.0, (as earlier linux versions) a nasty "backdrop-bug": If you choose to have a backdrop then, as soon as you click in the backdrop, it hides everything and ctrl-Q (quit) doesn't work. Also it is some work to get rid of this option again.

So, better don't use it on Raspi. Here is a stack that enables you to use a "virtual backdrop" (substack) and has also some other tiny features.

Whenever something disappears (is possible if several stacks are open), then simply click into the backdrop. This brings all other LC windows to front, especially if the backdropPi window hides behind it's substack.

Run info. The stack is fast enough for Raspberry Pi running LC 6.5.1 and later; also runs on all other platforms.

A stack that shall visually explain how regular polygons are constructed. Look at the script, you can see there how the points on the circle are computed. 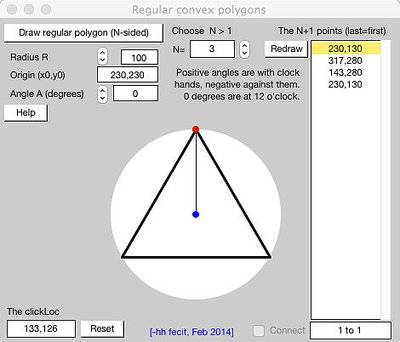 With newer LC you can also "get" such points for using them. I scripted in detail how such points are created. One single formula (for angle 0) is the central line for understanding it also 'theoretically', a second line -- slightly advanced -- shows how a 'rotation angle' can be involved in the computation.

I added, just for fun, or "learning by doing" for beginners, a simple animation of an oval graphic object along the points of such polygons.

Look at the script and try to change some parts, it may be also fun to simply "play" with the stack and its scripts.

=== EDIT:
The stack below needs a correction:
In line 66 of the card script insert a semicolon after "origin". It should read:

This is a self-contained group that handles SnapToGrid In Browse Mode (use with browse tool).
By checking "H" and/or "V" the group makes a horizontal grid and/or vertical grid with the chosen spacing. Here 2-256 are absolute pixel values, 1/2-1/64 divide the height and/or width into equal parts (1/2 gives 2 parts, ..., 1/64 gives 64 parts). The grid is drawn optionally on bottom or on top or hidden.

The group (as background-group) now uses the following handlers PAST the card script, before the stack script. If you wish to use these handlers of the group you have to pass them!

That is, it will react on every mouseDown that reaches it with dragging (grab) the object that's targeted by mouseDown.

It will react on every mouseUp that reaches it with snapping to the drawn grid, IF button "Snap" is checked OR the ctrlKey is down while mouse goes up. The five small buttons let you select how the snap is done: by aligning the topleft or topright or bottomLeft or bottomRight or the loc of the dragged object with the grid.

It will react on every resizeStack that reaches it with redrawing the grid.

At left are color selectors for the two grids and the card background. Check "Hide" hides the two grids. Snapping is independent of the visibility of the grids.

[attachment=1]snapToGridInBrowseMode.jpg[/attachment]
Now just try with the attached demo stack, choose a horizontal and/or vertical grid and drag the objects around, let them snap to the grid -- in browse mode. 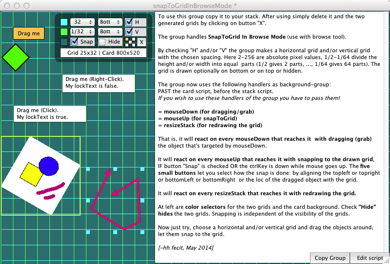 These two stacks play with a moving objects technique, imitating the well known 'garage door effect' of web menus (by jQuery and/or CSS 3).

The simple starter/beginner stack 'garage1Door' is nearly completely developed on raspi and shows the main technique with one door. The scripts are short, commented and rather elementary. It builds a group and one can copy this group 'readymade' to other stacks. Thus you can create your own garage door stack by 4 copy/paste actions. (And the groups can arranged as you like it! Or each one may be hidden and reappear.) 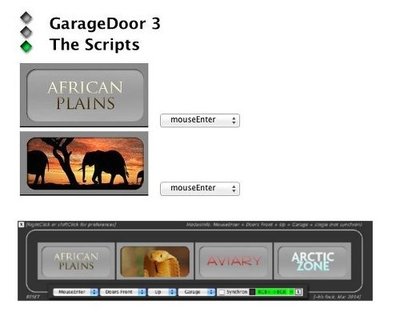 The more advanced stack 'garage4Doors' uses the classic set of four doors and shows moreover many variations of this technique. It works not with groups but with 'hiders', because slider variations are simpler derived this way. Each of these visual variations has its own 'movement beauty', clearly depending also on the resources used for the graphic objects. I added the images that shall serve to compare directly to the CSS/jQuery version. You have to add other resources yourself. The scripts require some experiences with message handling and organising possible states. A teeny will probably need some assistance for scripting this or adapting the scripts to other situations.


Options for ...
... sum up to 40 choosable animation types, and these may be each triggered by either mouseEnter, mouseDown or spacebar.

I was really surprised, how good this runs on raspi, even a synchronised moving (it is, needless to say, not perfect).

This stack holds a self-contained ruler-button, you can just copy and paste it to cards on other stacks.(You will find the following info and much more comments in it's script.)

Click CRB to create on the current card OptionClick/AltClick CRB to create also a 'full' grid of long lines.
Default grid is quarters of the width and thirds of the height of this card.
(AltClick on Raspi means: Hold first mouseDown and then press altKey while the mouse is still down.)

If the ruler is ON then After a card's size change simply click (or option-/altClick) CRB again. This will at first remove and then recreate all ruler objects. (Or use the exemplary resizeStack handler of the stack.) 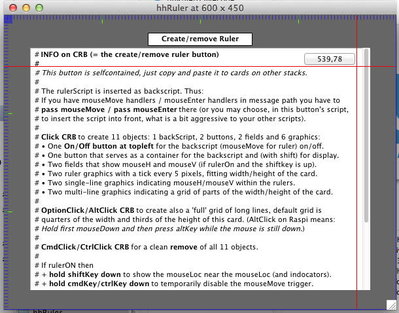 To change the appearance of the ruler you can change the local variables of the script or change the separated 'properties-handler' of CRB to your wishes, for example set an origin different from (0,0). Here is the stack.

These are four text utilities. 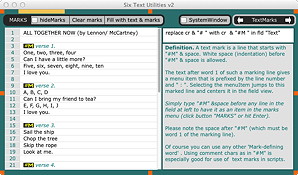 The stack has also two kinds of path menus where you can go to parts of the stack path or file path (as in Mac Finder or TextEdit windows by cmdClick in title).

There are eight 'location' buttons along the stacks boundary for moving the stack to the corresponding locs on the screen.

Any chance you could put together an example stack of LiveCode controlling / reading the IO on the Pi?

I think this is something a lof of people may like to start with...
Top

This is already perfectly solved by Python packages. There is another topic in this subforum about GPIO uses, contains a livecode stack that does it via shell and a link to a python library for that.

Attached you'll find also a stack that shows, how to use python from LC, can be very comfortable for features that LC currently doesn't has, for example 'bigNum'-handling.

This stack is a Python Helper.
Python is the main scripting language of a RaspberryPi and there are a lot of tested scripts, ready for use. To use these with LC we need an interface. This stack is such a (simple) interface. It demonstrates how to use Python from LC via it's "shell" function.

Scripts are commented, every action button has help. There are a few examples added (Text, Big numbers, list building). You can play with these to get basic knowledge of python.

The techniques used here are (after small changes) also applicable to other scripting languages as perl, PHP, Powershell or applescript. 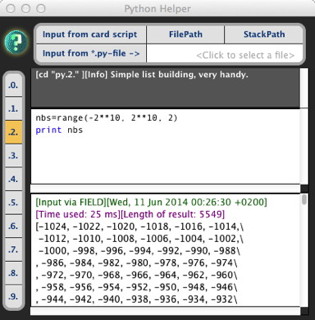 Here we give a very fast script for creating the frequency display of a counted set, that is the distinct/ unique objects, each prefixed with its frequency of occurence.

Such 'frequency distributions' will be used in part 2 for doing set operations ( OR, AND, SETMINUS, XOR ) between counted sets and creating the frequency display of the resulting counted set, that is the distinct/ unique objects, prefixed with their frequencies of occurence in each of the two sets.

That is, you see from the result too, where the distinct objects come from, what may be an important information.