I'm new to livecode but I'm working well and I like it.

There's a way to have a single window to work on like any other professional IDE ?

I've searched here in the forum but found nothing

luckily livecode is not a professional ide, and therefore does not need to restrict itself to a single window.

In fact it's so decidedly hobbyist that, If you really really want it, there's a way to write your own IDE, because the whole ide is made with livecode!
Various teststacks and stuff:
http://bjoernke.com

Do you mean that the message box, property inspector, toolbar, etc. are in view? These are all controlled by the "View/Palettes" menuItem, if you want. I find these essential to be open at all times.

But if you mean other stack windows, or utilities such as the application browser or menu builder (which in themselves are all stacks) then these were opened by you explicitly.

As Bjoernke indicated, this is all good news. You can always control your environment any way you want to. Consider making a small palette that hides any or all of these other gadgets, and can sit in the corner somewhere until you need to access it. This would be a terrific project for a new user, as it can be embellished endlessly, and you will not get any other work done.

There are a couple of ways of reducing the clutter a little.

I find that having the icons for the top main toolbar is not really necessary - so you can turn them Off under the "View" menu "Toolbar Icons".
Another way to focus the clutter is to turn On the backdrop - again in the "View" menu.

Or else you might use someone else's IDE enhancement tool.

GLX is quite good, but doesn't reduce the window count though.

Glass editor is Ok, though it does require you to jump through some hoops to be able to use it (the designer lays down a few 'rules' !)

I'm sure there are also other tools to make the workspace more efficient, though I find the best option is to have multiple monitors

Cheers,
Dave
Coding in the Sun - So much Fun.
Visit http://electronic-apps.info for released App information.
Top

lordmax wrote:There's a way to have a single window to work on like any other professional IDE ?

The others here have been helpful in offering solutions, and I'm working on a plugin for the IDE which will also reduce screen clutter, but for now let me provide some background that may help you appreciate why LiveCode is such an unusual beast:

The difference here is that LiveCode is truly live code, so the window you're working in is actually the window you're building, and you both build and run in the same environment. As such, the tools in LC need to be separate windows.

When you work in most single-window IDEs you're not working on your actual live windows, but merely simulated proxies of them, which is okay in those environments since they don't actually execute any code in them, but require you to first compile the app and run it in a completely separate environment.

LiveCode is definitely a very different way of working, from its core to its UI. But I hope as you spend more time with it you'll set up your environment to be as efficient as you're looking for, and I suspect if you do you'll eventually find LiveCode to be among the most productive tools you've ever used.
Richard Gaskin
Community volunteer LiveCode Community Liaison
LiveCode development, training, and consulting services: Fourth World Systems: http://FourthWorld.com
LiveCode User Group on Facebook : http://FaceBook.com/groups/LiveCodeUsers/
Top

lordmax wrote:Hi
There's a way to have a single window to work on like any other professional IDE ?

At this time I don't think it's possible, anyway, in this page http://www.kickstarter.com/projects/175 ... f-livecode you can see a prototype of what could appear one of the future versions of the LiveCode's IDE (I do not know with certainty, that's just my speculation).


BTW one of the most beautiful things of the LiveCode IDE is the new Project Browser, I really love it. If you learn to use all its features, your experience with the IDE improves a lot.
Top

Mag wrote:It this time I don't think it's possible, anyway, in this page http://www.kickstarter.com/projects/175 ... f-livecode you can see a prototype of what could appear one of the future versions of the LiveCode's IDE (I do not know with certainty, that's just my speculation). 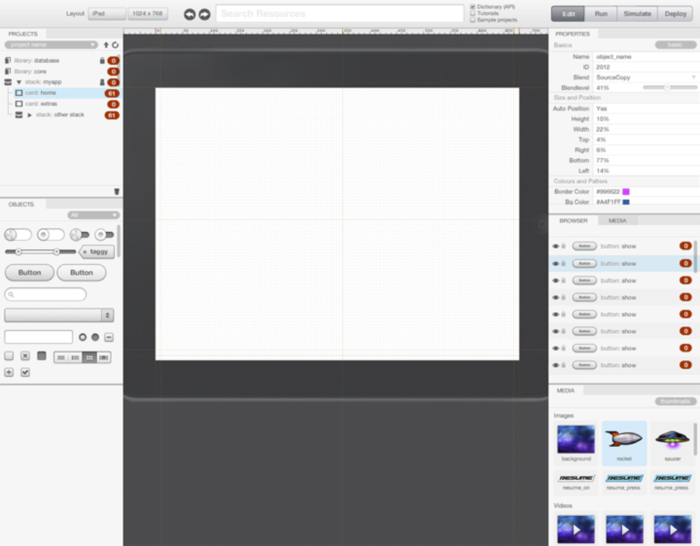 Yes, this is one of their Kickstarter goals, they even have drawn a mockup of what the new IDE will look like. So RunRev wants what you want =)
Top

This is really a great new.