I was talking to a friend about the benefits of LC as a multi platform development tool and he challenged me how LC compares with Flutter.

As I never considered Flutter I wasn't able to answer and now I'm curious to know if somebody in the forum has done the comparison and would be kind enough to share.

Looking forward to hear from the community

Well, I dunno where to start, it looks like there are a LOT of differences. Depending on what your attempting to do, they could be pluses or minuses ?

* Flutter is only for (apparently) mobile development. If that is all you ever are going to do, it would be worth looking at, but it is nowhere near the number of platforms Lc provides for.

* Flutter is not a development environment, per se, it relies on you having some other IDE already installed such as Xamarin, or some other way to edit the .js scripts, which is what it looks like is the language it is using.

You can build apps with Flutter using any text editor combined with our command-line tools. However, we recommend using one of our editor plugins for an even better experience. These plugins provide you with code completion, syntax highlighting, widget editing assists, run & debug support, and more.

* Java script itself can be a trying language to program in, some like it, some go nuts from it. Js isn't tied to an object, where as all Lc scripting is. Again, +/- is in the eye of the beholder for that one.

* Flutter is produced by Google. If your a fan of Google, maybe that is good. If you think Google is the evil empire despite their corporate motto, maybe not so good. If your going by their track record for the number of things they have "produced" that have subsequently been "discarded" once the hotness was gone, that alone may be minus, but since they develop the SDK it is compiling against in at least one case, maybe not?

As far as pure scripting languages go, Lc is far easier to learn and deal with from a structural p.o.v., .js has far more learning material out there, but (as far as I know) there is no way you are ever in one line of code going to get as much done in .js as you can in one line of code from Lc.

Not a bad idea if you are going to ask about something to post a URL to that thing: https://flutter.dev/

Well, I wonder how many of the people who pop in and out of these forums have ever heard of Flutter (I hadn't until just now: Thanks Simon)? 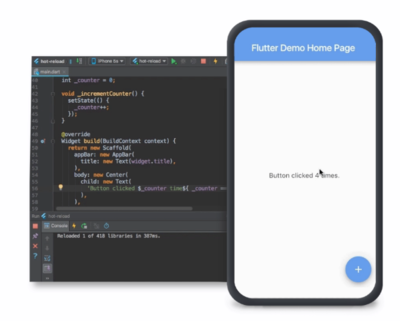 So, you develop in a glorified text editor.

No WYSIWYG as far as I can work out.

Everything, in terms of initial setup, is more awkward than installing LiveCode.

I am not going to comment further as I really cannot be bothered to go through all the rigmarole
of installing Flutter.
Top

That shouldn't matter that much as as far as I can see his and
my postings say much the same sort of thing: his in a technical,
programmer's sort of way, and mine in a "man with a spade" sort of way.

Heh, I sure didn't get as far as the install size limits, so I'd say your 'spade' dug out a lot I missed completely

I think we both missed one part though, and that is that Lc can incorporate .js, .js can not incorporate Lc. So if you had something you had to do purely in .js in a complete program, you could do that tiny bit and be done from Lc.

So it seems to me that Lc would be far more RAD than Flutter.

@bogs & @richmond62 thanks you very much for your broad remarks (much more than what I was expecting).

Is very clear to me now the benefits of LC against Flutter and why it is a better choice.

I've used Flutter and the apps it produces are fast and true to Android and IOS in terms of appearance and operation but unless you know the Dart language or are comfortable with JavaScript then the learning curve is much higher than LiveCode.

Its a Google project which they are using internally which means its getting a lot of input from Google and continuous improvements and updates. There is already a huge user base and user community with many YouTube videos and lessons considering the short time its been available.

GitHub has many example scripts and full projects.

Installation can be a bit tedious and has a few loops and hurdles but once done.. its done.

Officially, at the moment, it is Android and IOS only, however there are third party ports for Windows Linux and Mac. Google have already stated that they want Flutter to be a true multi-platform dev tools so its not hard to imagine that an official Windows, Linux and Mac version will be on the cards.

Its is script based, no official IDE like LiveCode. There is a third party drag and drop Visual Dev tool here. This is for layout only, generating the code for the visual parts of the app.
https://flutterstudio.app/

So the big question, what do I prefer, LiveCode or Flutter?

Both!
For its ease of use, speed and integrated solutions its got to be LiveCode.
For its native support and the speed of created apps, Flutter.

Which will I be using more in the future?
Honestly I do not know...time will tell.

As an aside, I've also notice on Facebook that Digital Pomegranate run by Todd Fabacher are doing a lot of recruiting in respect to Flutter development.. does this mean they are moving away from LiveCode?


Anyway a much better review can be found here.
https://medium.com/flutter-community/in ... 6dc926b34a
Andy Piddock

Interesting, when I was reading the review, it rather reminds me of Squeak, or...um... what was that thing now? Damn my crud memory

If I remember what it was, i'll add it below.

I had never heard of either Digital Pomegranate or Todd Fabacher, probably because I am too new around here. Their blog hasn't been updated since 2017, at least as of then they were pretty pro Lc.

AH HAH! Now I remember, the other was REBOL! Rebol was fast, light, easy to use in a lot of ways, but basically to run a program, your desktop became Rebol, just like Squeak, and apparently this Flutter.

Todd and his team made the official Sony Score app, details in LiveCode case studies below.
https://livecode.com/studies/
Andy Piddock

Ah, now there is an interesting story as well, thanks Andy!

Well Bogs and everyone. I will say we use both Flutter and LiveCode. It all depends on who is coding and what needs to be coded. In fact, we actually now have one of the largest Flutter development teams in the world with 27 people creating Flutter Apps.

For example, we just finished an app to control the Tesla car. That was Flutter. We simply could not get the control we need in LiveCode.

But we are about to launch a LiveCode app that will change Accounting and VAT submissions in the UK https://xpressobooks.com/. Now we will make 1000% more on the Accounting app then we will ever make on the Tesla app.

What you need to do is make a business and technical decision on what is best for the user experience, development time needed, budget and the needs of the client.

I love both LiveCode and Flutter, why does it have to be vs. The smart person learns to use the best tool for the task at hand.

And we are so freaking busy we just need to take down the blog or put content in often. It is a challenge. Thanks for reminding me. We are redoing our website.
Top

Thanks for the update Todd,

It's great to see that you are doing so well.
Just looked at XpressoBooks, looks an interesting concept and well timed for the financial submission changes.

Re the app to control the Tesla car. Was this for Tesla or a third party...just curious.

tfabacher wrote: ↑
Tue May 07, 2019 3:19 pm
Well Bogs and everyone. I will say we use both Flutter and LiveCode. It all depends on who is coding and what needs to be coded. In fact, we actually now have one of the largest Flutter development teams in the world with 27 people creating Flutter Apps
....
I love both LiveCode and Flutter, why does it have to be vs. The smart person learns to use the best tool for the task at hand.

I absolutely agree with this, in fact, I think I said something pretty similar many times in the past. If my post came off as an "us vs. them" type post, it certainly was not meant to be, I was trying for a straight answer to the OP's question.

Myself, last time I used .js was with a text editor, shortly after (I believe) Netscape released it. I'm sure it has come a long way since then, and I know there are now a lot of versions of it around. If that is what Flutter is running, I would not claim to be very knowledgeable about the languages capabilities at this point.