Thanks, Jacque for all the great feedback and suggestions.

Yes, Windows is a bit lazy with open files..just opens them again...most of the time!

I'll incorporate your changes in the next upload with an option to set the BG color.

And I'll have a look at the dropdown colors.
Andy Piddock

Ive just uploaded a new version which should address any file problems.

working on colors next..
Andy Piddock

1.0.6
The option to exclude a search target was added in v1.0.6, this allows for quicker search returns if you are only interested in searching a subset of all the search targets available. To exclude a target, click on the green segment above the target to exclude. The segment will turn red to show that this target has been excluded from the next searches. Click again to reset, the segment will turn green.

If you find any problems or have suggestions please post here
https://github.com/AndyPiddock/LiveCode ... rch/issues

Thanks Andy for the effort you put into this great tool, which makes our lives easier

Sorry it is so long after your post Andy, but I did finally get time to download it and give the latest a shot. On compiling it, I got an error saying it was missing an external file. The only file I can see included that isn't a stack is the resources.txt file. In the standalone settings, the checkbox to copy it is unchecked, so maybe that is the problem.

I checked the folder, there is no resources.txt file in it.

I should have removed the resources.txt reference from copy files as it is no longer required.
Please remove from the copy files before compiling.
I've just updated the file on Sample Stacks to this end.

A lcmsresources.txt is generated on first run in the user/documents folder (if it does not already exist).

sphere, thanks for the kind words.
Andy Piddock

The new version downloaded and worked ok on one nix distro, but I was unable to locate the lcmsresources.txt you mentioned either in the home, documents, or program folder. 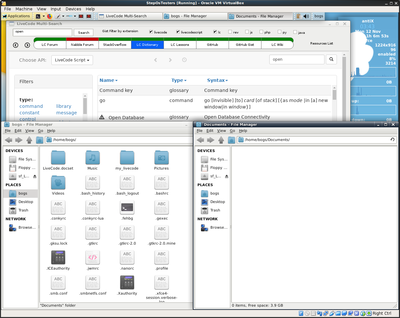 On the distro I was able to compile it on (antiX), it appears to stutter on startup. I don't think this is anything you can fix though, I suspect it is the way that Lc 9 and up are going to work on other distros.

Similarly, having compiled and tested to make sure it was working on the first distro, I was unable to get it to launch or start on the second distro (q4os/MATE). Will be testing on LMDE2 later today (LinuxMint Debian Edition), but I don't hold out much hope there either as Lc 8.x+ doesn't work properly on it.

Where Lc will run, though, the program does work excellently, great job

Edit - I was pleasantly surprised to find it *does* actually run on LMDE 2! 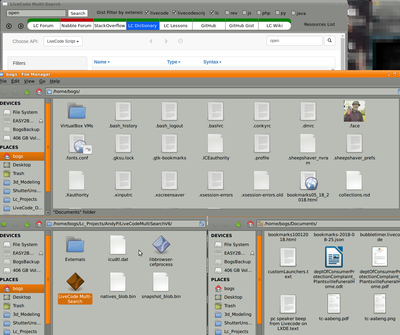 No lcmsresources.txt file found, though. Now I am wondering if the 'stutter' I see on start up is the program trying to create this file on 'nix, but failing somehow. Hmm.

Ok it looks like specialFolderPath("Documents") is not available on Linux!

Looking at the docs I need to use specialFolderPath("Home")

On Linux systems, the following folderIdentifier values are supported:

I'm spinning up a Linux Mint box for additional testing and I'll get a new version up with a check for Linux later today.

Thanks for all your input.
Andy Piddock

Always a pleasure to help you help us

Hmm, not so easy. All sorts of strange things happening on Linux Mint 64bit.

I made a small test stack for checking the write to Home and this works...until a browser widget is added.

I'm going to try a clean Ubuntu distro and see if that is better, but it looks like using the browser widget on some Linux64 distros is going to cause problems....I thought this was a problem with 32bit only?
Andy Piddock

It seems to work on 'buntu, but I have such an issue with 'buntu I never keep it around long, so I haven't thoroughly tested it there.

On mint, 8.0.x seems to work ok, 8.1.x ymmv, least on mint lmde 2. Haven't tested lmde 3 yet (they dropped the MATE desktop, which I actually liked). Maybe I'll test that next

BTW, if you want a real treat, give antiX a try. Super light weight, and I actually was using that when I compiled your program a few posts above, so I know that 9.x at least works on it.