The English word for "Fries" is either 'Frisian' or 'Friesian'.

I worked for about 4 months about 33 years ago on Vlieland; one of the Frisian islands with a bloke who only spoke Frisian and Nederlaans: as my Nederlaans was not good at all at that point I spoke to him in Scots and he spoke to me in Frisian, and, even if my Dad does come from Dundee where half the folk are called 'Fleming' we got on very well.

And the English word for "Pommes Frites" is "Chips".

Most people in the Netherlands like Mayonnaise on their chips. 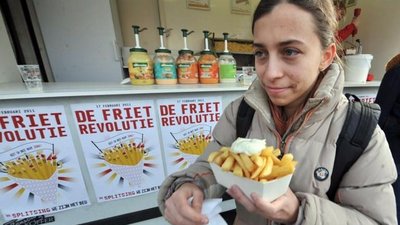 So, what is the point of your picture?

Needless-to-say, mine are 100% relevant to marketing LiveCode.

But it does, it has roots to Angelsaks, Frisian and Scottish, West-germanic languages influenced Old-English.
you can read it here:https://educatie-en-school.infonu.nl/ta ... aanse-taal reuires you to translate it or read dutch

But did you know that long long looooooooooooong ago England was attached to the Netherlands...

By the way, there was a "Neerlandicus", a man very high skilled in dutch language and he could by speaking transform many words from several languages back to Dutch as he believed and was convinced that Dutch was the mother language of many if not all other languages. He was on tv, so it's true...

I searched for the word Neerlandicus in Google and found this:
https://www.youtube.com/watch?v=Q3Gc5B_-lh8

By the way, automatic translation and subtitles still have a lot
of room for improvement...