Part is it is no doubt related to not using Gnome objects for menu items. 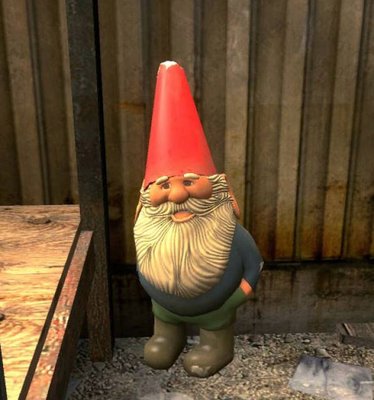 Well, I figured out it isn't the 'gnome' half of the equation. This is the gnome desktop installed on Mint, the menus look quite normal here.

I suspect it is the simple fact that when one themes one's desktop
(err, is there a verb "to theme"? dubious) LiveCode does not jive
with it and alter the fontColor so it contrasts with whatever
colour the theme sets the background to.
Top

richmond62 wrote: ↑
Tue May 01, 2018 5:15 pm
I suspect it is the simple fact that when one themes one's desktop
(err, is there a verb "to theme"? dubious) LiveCode does not jive
with it and alter the fontColor so it contrasts with whatever
colour the theme sets the background to.

Boy do I feel silly, I kept staring at that first post (and many subsequent ones) and it finally dawned on me what else was wrong with that picture, the menu is on the application and not in the top bar

In 18, when installed as the 2 upgrades, all applications except for Lc put the menu in the top bar. I'll do a straight install of 18, and see if it is still the same (if someone else that is already running 18 doesn't comment back first).

I was correct, even back in 16.04, the livecode menu stays on livecodes menubar instead of going to the top bar in Gnome, despite every other applications menu being on the top bar.

The menu in Lc 7.x doesn't even try to simulate the colors used in the default theme, although they are easier to read than 8.x -> up. 8.x and up only fail slightly in the color scheme itself, but it is obvious they aren't trying for a match other than the usable options text colors.

Not sure what the link to reddit tells us, I'm not an Ubuntu user by default, setting it up was more in the nature of an experiment with me, but I would guess most people upgrading from one version to the next (say from 16 to 17) would do it through the tools Ubuntu provides. I could be wrong of course, its possible everyone else downloads the .iso and installs it that way, but some how I doubt that.

Doing it using Ubuntu's update tools, 18 keeps the top bar menus for programs, with the sole exception (as far as I could see) being livecode. I'll add I didn't test every single other piece of software you could add to Ubuntu, but I did install a fair number of programs that don't come with it by default.

The Reddit link merely confirms that Ubuntu's global menu bar is no longer present in 18.04, gone with most of the rest of the Unity experiment.

It was a good run, an effort for one common OS on every screen type, from laptops to phones and even TVs. But it was expensive to produce, so during last year's restructuring at Canonical Shuttleworth made the decision to cut Unity to focus on Enterprise, Cloud, and IoT segments which keep the ship afloat.

While I enjoyed Unity and found it very productive, I don't mind at all seeing Ubuntu return to Gnome Shell.

Only apps that used certain API got automatic handling of their menus. For several years, up until just a couple years ago, Firefox was still using XUL and required Canonical staff to write patches for each release so it would work with the global menu bar. Other apps, like Blender, never integrated with that Ubuntu-specific feature.

And LiveCode was among them too. For quite a while I was exploring ways to modify LiveCode to use Ubuntu's global menu bar in a way that didn't break menus on other distros. I even filed an enhancement request for it. But like Firefox's XUL, LiveCode doesn't use the specific set of Gnome APIs needed for that, and the engine modifications for it would have been non-trivial.

And not just for LiveCode Ltd., but every developer using LiveCode who wanted to deploy to Ubuntu. The best scheme we could come up with was similar in some respects to how LiveCode handles the macOS global menu bar. It's a great mechanism, but required devs to understand the platform differences and account for them early on in the design process. With Unity, this level of effort would have been needed for deploying to both Ubuntu and to other distros, since all the rest have menus attached to windows.

But it seems that's all behind us now. With Canonical dropping Unity we can get back to designing just one app for all Linux distros. Canonical saves development money, and all the rest of us do too.
Richard Gaskin
Community volunteer LiveCode Community Liaison
LiveCode development, training, and consulting services: Fourth World Systems: http://FourthWorld.com
LiveCode User Group on Facebook : http://FaceBook.com/groups/LiveCodeUsers/
Top

No you don't, and nor do I! Far, far too abstruse and complicated.

UNITY was a distraction that wasted an awful lot of Caonical's developer's time as part of
Canonical's plan to set up a unified Linux system encompassing desktop computers,
tablets, phones and anything else in the mix.

They've abandoned Unity; we can breath a bit more easily.

If you pop over to the Distrowatch webpage [ https://distrowatch.com/ ] and do a quick trawl
through the Linux versions listed there you will quickly find a large number of distros built on-top
of the Ubuntu 'thang' that do NOT use Unity: this being because an awful lot of people like the
relative simplicity of Ubuntu but are "not very keen" on Unity.

Obviously Canonical have takken tent of public opinion (having gone through an
"arrogant as Microsoft and Apple" phase).

as the XFCE is a simple WIMP GUI that does not feature all sorts of twiddly features that get in the way
and suck processor cycles like a drowning man sucks air.

Certainly I believe it is unfair to lay the blame for LiveCode not "jiving" with
Linux window manager menu colours at LiveCode's doorstep.
This is rather like blaming the fact that a sofa company's red sofas don't
go with the "curdled vomit" paint on the walls of my front room. 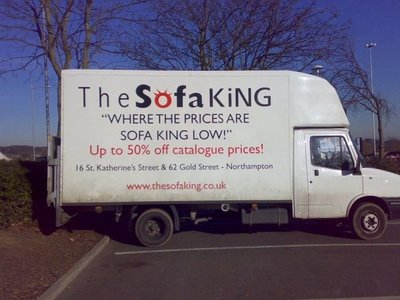 richmond62 wrote: ↑
Sat May 05, 2018 9:57 am
Certainly I believe it is unfair to lay the blame for LiveCode not "jiving" with
Linux window manager menu colours at LiveCode's doorstep.

Au contraire, mon ami. Colors (at least where governed by standard theming systems) are among the things LiveCode can support well, and with minimal cost.

While moving menus from their common location at the top of the window to the Ubuntu-specific place in the global menu bar would have required a complete rewrite of LC's menu handling for that one distro, theme elements like colors can be easily queried and applied to existing properties in LC's menu objects.

I believe LC already does at least some of that when using the default "appearance manager" lookAndFeel. Any remaining support needed for that would seem a reasonable enhancement request, one focused enough that it may be doable as a small community project.
Richard Gaskin
Community volunteer LiveCode Community Liaison
LiveCode development, training, and consulting services: Fourth World Systems: http://FourthWorld.com
LiveCode User Group on Facebook : http://FaceBook.com/groups/LiveCodeUsers/
Top

Although I am not a fan of Ubuntu, I actually did see the point to some of their ideas. I didn't necessarily agree with it, but I did see it.

What I am not quite sure I agree with, Unity aside, is this part -

richmond62 wrote: ↑
Sat May 05, 2018 9:57 am
Certainly I believe it is unfair to lay the blame for LiveCode not "jiving" with
Linux window manager menu colours at LiveCode's doorstep.
This is rather like blaming the fact that a sofa company's red sofas don't
go with the "curdled vomit" paint on the walls of my front room.

See, I look at it this way. If your saying that your supported version of Linux is this particular distro, then you pretty much have said "I will take the blame if my red sofa doesn't match your curdled vomit paint on the wall".

Linux isn't just one distro, and unlike Mac or Windows, you could easily have a million different combos of any number of factors that make up a desktop. But we're not even discussing the vast majority of differences, we're talking about menu colors matching what is set(

) Can you imagine the howls of protest if Lc couldn't manage to pull off the Windows theme that was being displayed, even a puke green one like Da Vinci? 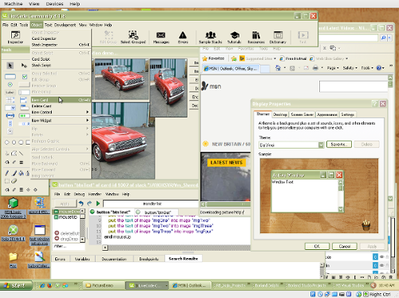 Or if it couldn't put the menu on the top bar in Mac, with graphite decorations? 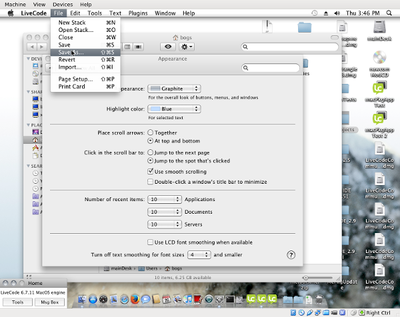 As an end user, I am certainly *not* the one who told Lc which Linux to support, I believe I have mentioned in the past that if I were the one making those suggestions, I most certainly would have recommended a base distro (Debian, Fedora/Redhat, Suse), not a based on a base distro no matter how popular it was, or what quirky little things the maintainers decided to throw into it (Wayland, Unity, etc.).

In this case, though, apparently we don't think that, even though Ubuntu was the target distro chosen for support, that Unity (the default look of Ubuntu for what, the last 7 years? should be the target look on an Ubuntu install. Well OK then, we're all satisfied with that now aren't we just.

That aside then, now we can't even match the menu colors? Really? Why bother saying your trying for a native look at all? I think a fair amount of credit is due all round.

Is it easy? No, should it be? Is it trivial to do? NOT at all, but then, your trying to push a 'cross platform product', and it isn't like the API's for interfaces in 'nix are hidden away from view. You set the task for yourself, it isn't like someone came along behind you and moved the bar in a different direction and, even if you feel like they did, you need to be able to adjust your product to it or change your mind on the nature of your product.

Claiming you support something doesn't mean you should be able to pick and choose which parts of it you support, you either do or don't. I guess I am in the minority in that opinion though.


For the LiveCode IDE and standalones, we decided to provide official support for the Ubuntu and Fedora distributions.

I wonder how many test machines LiveCode run at their office?

Presumably one for each Linux distro they claim to support. 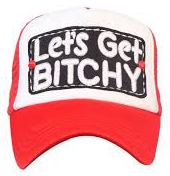