I just a few days ago installed LC 9 stable and Xcode 9.2.

In Xcode I downloaded iOS simulator 11.1, while according to LiveCode "Mobile Support" and "Test Target" I have even 11.2 available...

So whenever I Test run an application, the simulator fails to load.

Any ideas how I can get this thing going...?

What happens if you remove Xcode 8.2.1 from the "Mobile Support". Keeping only Xcode 9.2 and deploying to iOS 11.2 should be fine.

I’ll try again when I’m back at my laptop.

One thing I've learned in my experience with Apple environments is that all of the versions of the various components must "match". For example, Xcode 9.2 is NOT able to mount an iOS iPad with iOS 11.3... it requires Xcode 9.3. Ditto for other incompatibilities with Sierra vs High Sierra, etc.

You say you started with Xcode 9.2 and then added 8.2.1 so I don't see how Panos's suggestion is going to make a difference but it is definitely worth a try. Other than the compatibility issues, I don't have any other suggestions.
Top

This is not correct. There is a difference between the following two "iOS versions":

2. The *minimum* version of iOS that *you* choose your app to run. You can set that in the Standalone Settings.

I suggested to remove Xcode 8.2.1 from the "Mobile Support", as when there are more than ones entries there it is possible that the standalone builder will get confused (I had seen that in older LC versions).

If the simulator does not start, try to open it first from Xcode:

- Open Xcode 9.2 and choose Xcode -> Developer Tools -> Simulator
- The simulator (possibly the iPhone 5s one) will open.
- I suggest changing the simulator device to iPhone 6 or above, as the default iPhone 5s I *think* is 32 bit, and LC 9.0.0 does not support 32 bit simulators.
- Once the new device (e.g. iPhone 6) simulator opens, wait for it to fully load, until it shows the home screen.

You should now be able to deploy to the simulator.

Hi Panos, I have followed your guidelines with no joy. Please find below my configurations and the error I'm getting. What should I do? Help please I have been struggling with this problem for hours... 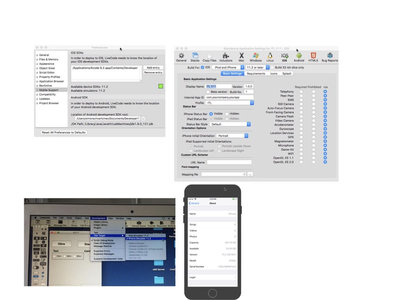 Maybe your command line tools are not set to Xcode9.2. Check this:

Did that fix the problem?

Panos many thanks for your prompt reply, the good news:
the bad news:

still no joy, as can be seeing below LC tries to launch the App but the simulator never finishes. The simulator initially loads an iPhone5. I did manually open an iPhone6 but it didn't change anything 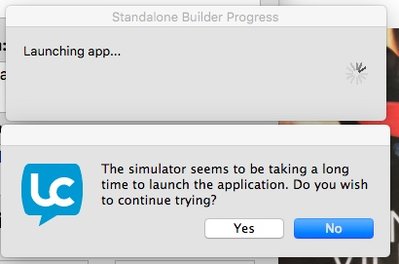 I had this problem too. Here is what I did to solve it:

1. Open manually iPhone 6 or more, and close iPhone 5
2. Wait until the new simulator fully loads and shows the home screen.
3. Quit and restart LC
4. Try again to test in the simulator, this time it should work.

Panos, I did as you said but even with the iPhone 6 opened when I try to Test LC (or XCode) tries to open an iPhone 5 and then I end up as in the previous post...

I had exactly the same issues reported in this thread, and this solution was the KEY for me. So THANK YOU for this post. +1 from me

(Incidentally, I think Livecode should add some more informative messages when C++ errors are thrown during application testing, and be a little more constructive in advising developers on how to proceed. These issues seem to be reasonably common....)

I had this problem too. Here is what I did to solve it:

1. Open manually iPhone 6 or more, and close iPhone 5
2. Wait until the new simulator fully loads and shows the home screen.
3. Quit and restart LC
4. Try again to test in the simulator, this time it should work.