Why do so few schools try LiveCode...?

Teaching software development? Using LiveCode to build your curriculum? This is the forum for you.

Richmond, Do you want to translate these stacks to bulgarian and test
if bulgarian teachers and bulgarian-speaking students could learn better
programming concepts if LiveCode is written in their own language?

Probably, you could even find some university students that want to test this
premise as part of their final thesis.

What is wrong with the way LiveCode pushes their product to education?

This says most of it: right from the "horse's mouth" (an experienced teacher): 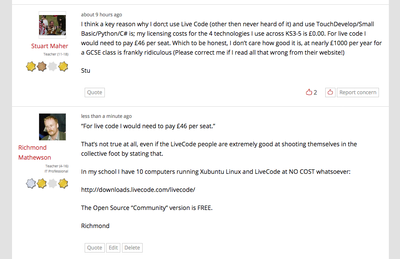 Probably, the cost of 46 pounds includes access to LiveCode support
and much more.

Open Source version is, as you explain, Community supported.

By the way, What do you think about translating MetaTalk Programmer
to Bulgarian or many other languages?

By the way, What do you think about translating MetaTalk Programmer
to Bulgarian or many other languages?

Well, I wouldn't bother to translate it into Bulgarian for the simple reason that ALMOST ALL children and ALMOST ALL programmers in Bulgaria have a sufficiently good level of English to cope with LiveCode
already.

Probably, the cost of 46 pounds includes access to LiveCode support
and much more.

Certainly, I would recommend teachers to start with the Community version, and would also tell them that
as experienced teachers they should be able to cope with day-to-day stuff with LiveCode by themselves.

Of course, at a later date they might choose, if funds are available, to buy a commercial package.
Top

Pretty Rude: but probably reflects the opinion of very many teachers: 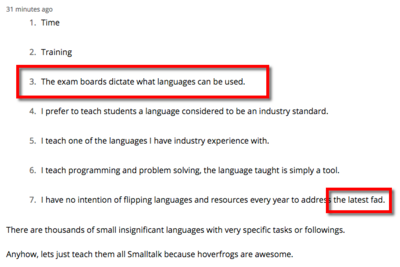 Then , we just have to prove them that they are wrong.

LiveCode is excellent for teaching programming
and problem solving.

Learning Livecode as First Computer Language opens the door to
learn and master other computer languages.

Just to prove this, we could include in every lesson, an interactive section
titled: "How they do it using C, Python and Javascript..."
In this way, every student could try every lesson in their own
(or their teacher's) programming language of choice.

If LiveCode were able to compile C programs in every desktop platform,
nobody could claim that it is just a passing fad or a niche language.
Everybody respect C language (and their pointers too)

I hope (cough, cough) the good people at LiveCode central are paying attention to this thread.
Top

Anyone claiming LiveCode is a niche or fad language is simply ignorant:

1. LiveCode and its predecessors have a pedigree that stretches back about 30 years.

2. As one can see from LiveCode's own website, programs written in LiveCode are deployed in all
sorts of places.

However, that ignorance may, partly be due to LiveCode's rather lack-lustre efforts at advertising,
especially in the education sector.
Top

Today, any student could use LiveCode to create (and share) their own personal learning stacks, just like many student's stacks in UMICH archives: http://umich.edu/~archive/mac/hypercard/

If LiveCode wants to promote this international contest, they can count with us to help.
Multimedia Mania guidelines are an excellent starting point for this project:

Local sponsors are easy to reach for local teachers, but LiveCode should provide at least one person to manage this international contest.

Dear LiveCode, What do you think about this idea?

Richmond, a few years ago, I discovered with amazement that exists a tendency in education who propose that teachers should become skilled entertainers and compete along television hosts, radio personalities, actors and musicians for the time and attention of their customers... I mean, their students.

Of course, there is another side for this coin:
http://teaching.monster.com/benefits/ar ... tertainers

In some countries, the most effective effort to reach the education market only requires to
1) bribe someone who make decisions or

2) bribe an influential member of the ruling political party.

In fact, Who are most interested in the advantages provided by using LiveCode in education?
Private schools and DIY learners.

For example: How could you use LC to teach about pointers and memory management techniques?
The answer is:
Create a simulation where techniques of memory allocation, heap deallocation, array allocation, memory ownership models, and memory leaks are represented visually as an array of color graphics or pixels.

Of course, someone could say: "But that is only a simulation, not the real thing!" but precisely because of that, teachers have better control over student's learning outcomes. Instead of avoid catastrophic errors, teachers could show each one of them and teach students how to avoid repeating these mistakes in their code.

"Ever since the very earliest computer languages it’s been understood that every language design embodies an assertion about the relative value of programmer time vs. machine resources. At one end of that spectrum you have languages like assembler and (later) C that are designed to extract maximum performance at the cost of also pessimizing developer time and costs; at the other, languages like Lisp and (later) Python that try to automate away as much housekeeping detail as possible, at the cost of pessimizing machine performance.

In broadest terms, the most important discriminator between the ends of this spectrum is the presence or absence of automatic memory management. This corresponds exactly to the empirical observation that memory-management bugs are by far the most common class of defects in machine-centric languages that require programmers to manage that resource by hand."

And that explains a lot...

I agree that ISTE's HyperSIG MultimediaMania concept is a good place to start. I was a judge for several years ... I mainly focused on the HyperStudio projects, but did see projects created with other tools.
Top

I was Judge in HyperSIG for a year. One of the projects that I evaluated (a website about Shakespeare) received the Second Place in it's own category. Precisely, a HyperStudio Project earned the First Place in that year.

When I asked HyperSIG about creating an International Version of Multimedia Mania, they told me that it was planned, but needed more resources that were not available at that time. I send them a spanish translation of their rubric and grading sheet.

Multimedia Mania stopped after some Major Corporate Sponsors retired their contribution, for this reason, local prizes, provided by local sponsors are the best option to organize a new contest.

LiveCode just need to assign one person that supervises and advice teachers who wants to create a Multimedia Contest for their students.

This originates from the "Million Dollar" webpage that became famous worldwide. You can see it here: http://www.milliondollarhomepage.com and read about it here: https://en.wikipedia.org/wiki/The_Milli ... r_Homepage It was an Internet sensation when he started it. The story was picked up by all the newswires and I even say it mentioned on all our local television news stations.

Everyone who writes a program in LC would get a pixel on the page (which pops up to their name). People love it when their name shows up on the Internet. They would show all their friends and the newspapers around the world would write about it.

Another way is to give them a pixel per program. The ones who wrote multiple programs would get more of a footprint on the page.

LiveCode could jumpstart it with the names of everyone who downloaded LC from the main site (and submitted their email address) or have teachers send in the list of students they taught LC.

If we convert all HyperCard stacks to Livecode, (with author permission) then the total numbers of stacks
and authors could reach a really high number.

I have already posted a Livecode version of a few HC stacks and have a few more stacks conversions pending.

Do you want to create an online editable and complete list of stacks and authors?
We could ask Max Vessi for a page in his LiveCode wikia website.

Return to “Teaching with LiveCode”