Thanks SparkOut.
Four years ago I started 'LiveCoding'. You were (and still are) one of these wonderful community members who help beginners to learn fast. So you are partially praising yourself.

Cuboid ('pure' LiveCode script) = LC-Magick #7
A Cuboid is a cubic form that allows different width, height and depth. Some call it simpler "3d-box".
We use "Perspective Image Distortion" for all 6 faces of a cuboid. The base shape is a unit cube (which has 1.00 = baseWidth = baseHeight = baseDepth). Use other values of baseWidth, baseHeight and baseDepth to set other size relations of your box.
You'll find more detailed help in the stack. Scripts are 'essentially' commented.
The antialiasing uses, once again, Bernd's gradient-technique. Thanks BerndN!
The stack is too large for the forum. You can have it
[Edit. Removed a typo.] 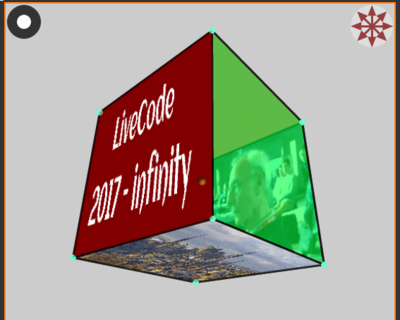 This is our "easter-egg" for the community"!

(a) A full moon.
A rectangular image is elliptical distorted (kind of "fisheye display"). (b) A partial moon. It's NOT done, as in real life, by a moving shadow, but by showing the corresponding horizontal percentages of the source image. Horizontal flip respects these percentages, also Effects (the moonshadow).

Moreover you can 'animate':
You'll find more detailed help in the stack, scripts are 'essentially' commented.
The stackfileversion is 5.5 (LC 6 is faster animating than LC 7/8/9).
The stack has 2 MByte (incl. images), too large for the forum. You can have it
For a demo of the replay you can download zipped image-series (201 PNGs each), made with the stack:
(5M) [EU] EasterEggJ-anim, (5M) [EU] HeadRed-anim, (2M) [EU] LCInfinity-anim,
_or_
(5M) [US] EasterEggJ-anim, (5M) [US] HeadRed-anim, (2M) [US] LCInfinity-anim.
Just put the folders into the folder where your stack resides. The animations are antialiased only, adding effects increases the size.

p.s. The eastereggs in our stack are alike the ones in bn's stack Eastergg of livecodeshare. 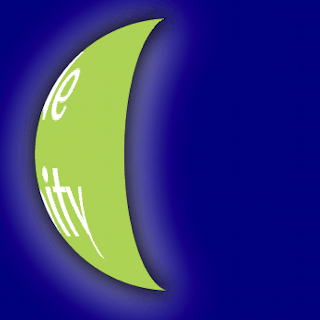 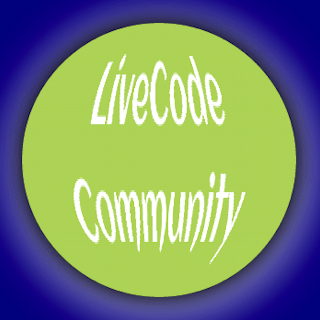 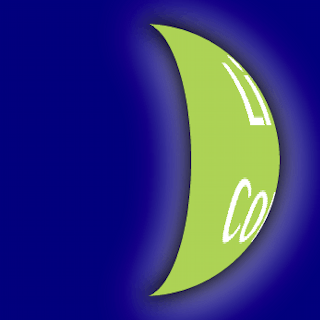 Legofy (is 'pure' LiveCode script)
This is a special (and partially improved) form of pixelate/pointillize, see
Stack #72 = LC-Magick 2

Choose the size of the lego-1x1-brick that is then used to build the 'plate' colored (overlayed) by your image. 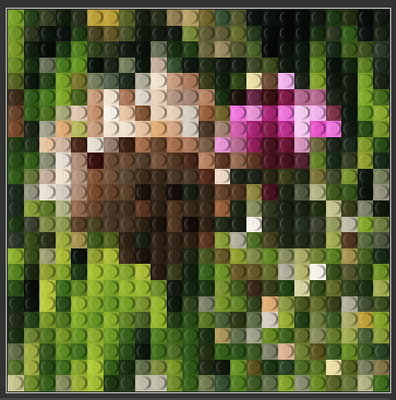 The (legofied) thistle that thistles at Thistle Street NW, Edinburgh.

The stack is a builder utility for rangeSlider controls.

A rangeSlider is a self-contained group that represents a horizontal or vertical Slider that has one, two or three knobs:
The usual slider knob and/or knobs for the lower and upper bounds of a range.

Example.
Say you have a slider base that represents the values 0-100.
You define the range 20-85 out of that by setting the lower thumb to 20 and the upper thumb to 85.
Optionally you can now set a slider thumb selecting values within that range 20-85.
(Or you use, like with 'usual' sliders, only a slider thumb, no lower or upper thumb, and select from the base range 0-100).

The stack shows as examples 15 of the possible variations of rangeSlider and lets you variate all these:
= Choose one slider thumb, two range thumbs or both.
= Choose the orientation (vertical/horzontal) of the rangeSlider.
= Choose the baseColor, the thumb colors and the text color.
= Choose which values to display as text (incl. percentages).

You can get and set the sliderValues by script (see the documentation/help in the attached "builder" stack).
The stack contains a button that shows the few lines needed to call in LC 6/7/8/9 the property inspector for an object by script and how to set its topleft.

p.s. I'll make a corresponding LC 8/9 widget as soon as the widget format is fixed, so that that we need to build only ONE version for LC 8/9 widgets. 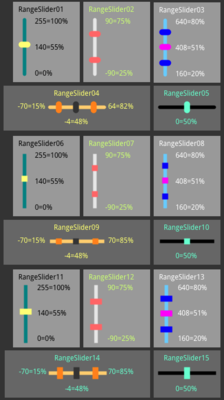 Screenshot of a part of the builder stack
(click the image to zoom in).

GuessImage = SundayGameNb7
This is a basic usage of different paint tools in order to reveal ("unpaint") an image by painting. It required a not so simple blending technique to have this working on Mac/Win/linux and Raspi:
An image in back is covered by an (empty) image that is the "drawing canvas" and has ink "blendDstIn". On linux (and Raspi) this opens the stack window to look through to desktop, so we had to cover it (on top) by a disabled opaque graphic of ink "noOp".

I tried to have this stack also running as a HTML5 standalone but there the _only_ paint tool that works is the pencil. 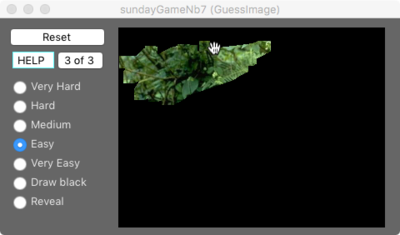 The effect is attained by overlaying an image by its own grayLevel version and then colorizing parts by creating transparent regions (setting the mask). We do this by
The stack is available in three variants: For these "go stack"-links open an LC IDE, version as denoted above, then type them or copy-paste to the message box.
Or you can use URLs given above, add ".zip" and download the zipped version of the stacks.

All stacks have help and let you import images and export your artwork.
The filesizes (incl. demo images) are 2.1 MByte each and 1.8 MByte each for their zips. 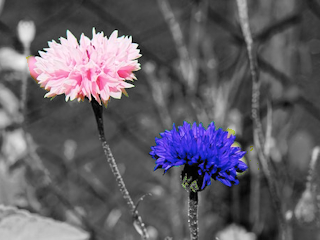 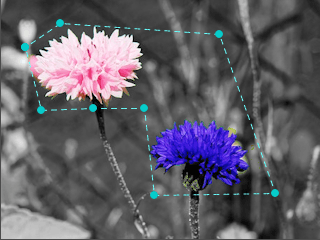 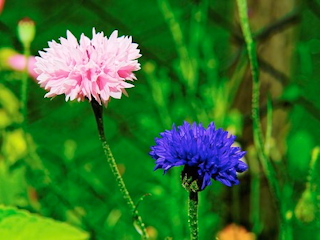 This basic map stack was made in April 2017 on base of a discussion in the use-list,
mapGoogle2.livecode is an update according to the current discussion (shows coordinates of the SW and NE edges of the map). 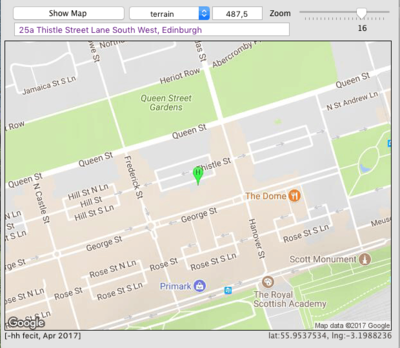 This is a *very basic* stack that shows how to build a custom "rotation"-control: The stack contains a graphics group including an invisible behavior button that shows on mouseDown the circular slider control.

The essential part of script is short but the attached demo images make it too large for posting it here.
So download it: (sorry, currently not available)

For mobile (or at any rate ...) you may have to adjust the layout of the slider-group (basics are already in the behavior script). 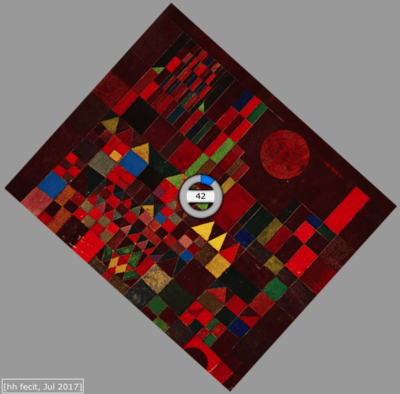 Clicked anywhere in the image. Then dragged circular to set the slider
to 66 degrees. [The "OvalSlider"-group hides on mouseUp.]

JPNG (named using JPEG and PNG) is not an image format but a compression method.
When saving it to files we use the file ending ".lcjpng" for that.

So this may be interesting for people who wish to compress (significantly in size) the PNG-images containing transparency in their stack/standalone and decompress only some images for "current" use, at runtime.

Compression/Decompression is very fast.
The compress/decompress scripts are short ( < 30 lines each) so you can use it in your own stack. An expert's report from the LC use-list.

Mark Waddingham wrote: ...the JPNG idea exploits the fact that color images tend to withstand data-loss, but alpha data (masks) do not - JPEG is lossy, it removes information which our eyes cannot see. PNG compression (a variant of gzip IIRC) is loss-less, it preserves the exact values of the inputs.
So you use the lossy method (JPEG) on the part of the image which makes no difference to our eyes, and the loss-less method (PNG) on the part of the image which our eyes would notice a difference in.

Recommended use on Mac/Win/linux: LC 9
which is significantly fastest (probably the upgraded Skia library 'pushes').

Often I have the situation of too many points in a polygon, slowing down the post processing of these graphics. Examples are auto-traced opaque region of images or outlines coming from a map ("coastlines"), or simply a signature or "curves" from freehand-drawings (do it in the attached stack).

So the question arises how to reduce the number of points of such polygons and preserve the "visual shape" as good as possible, according to a "tolerance" given for deviations.

Ramer and Douglas&Peucker found independently a simplification algorithm for this problem. I translated that to LC Script. It is fast enough for use on RaspberryPi and is very effective.

The algorithm is currently for a "connected" polygon only (no empty lines in it). If you have a polygon which is separated into parts by empty lines then simply apply the algorithm to each part of connected points (containing more than 2 points each). 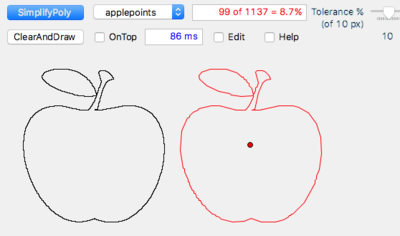 Once again, the result is surprisingly fast if the input image is not too large. Using LC 6 (which is 4-5 times faster than LC 7/8/9 with this technique) we have on RaspberryPi 2/3 computing times around 1-2 seconds for a medium sized image, acceptable for me.

[For use with LC 8/9 we 'outsource' the application of the tone curve to Javascript, done in a browser widget. By that we are very fast (usually < 500 ms for an image of size 1920x1080 pixels, depends on your CPU/GPU). See stack "colorToneCurve89" : (sorry, currently not available)

The current stack is also too large for a forum post. Find "ColorToneCurve6789" : (sorry, currently not available)
This "pure" LC-Script stack runs on Mac/Win/Linux using LC 6/7/8/9, and on RaspberryPi using (the for Raspi available) LC 651 or LC 704. Use it best with LC 6 (from speed reasons). 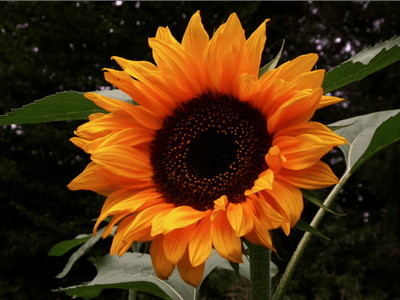 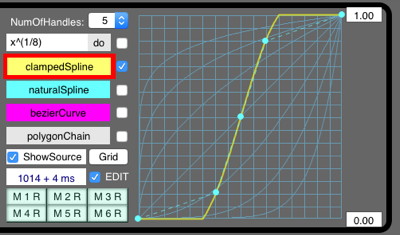 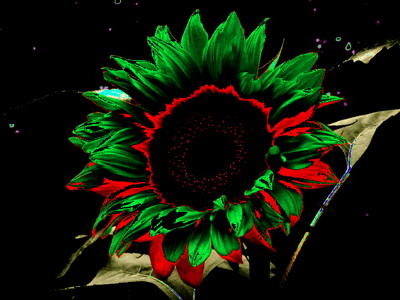 ReflectImage mirrors (a part of) an image and blends the transparency of the mirrored part. This shows, compared to lengthy techniques in "full" image apps, how easy it is to have such effects with LiveCode.

You can select Once again, the result is fast if the input image and the selected percentage are not too large. Using LC 6 (which is up to 2 times faster than LC 7/8/9 with this technique, 9.0.0-dp11 is only 10% slower than LC 6) we have on RaspberryPi 2/3 computing times around 1 second for a medium sized image.
The stack is too large for the forum. You can have it 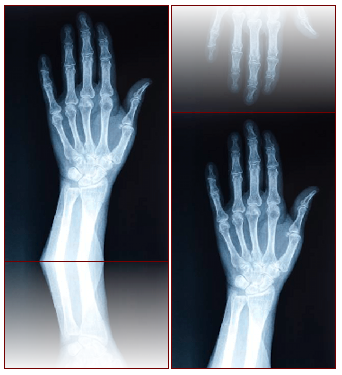 Very envious, you always have the coolest looking images in your rigs