About 10 days ago, I asked about this on the use list but got no bites. It seems to me a pretty important topic so I'm reposting it here.

The LC Conference didn’t reveal any plans for extending the SVG capabilities of widgets in the LC 8 series. Does anyone know if such plans exist, or if on the contrary we are stuck with monochrome etc? The answer will obviously have an effect on developers seeking to make multi-resolution apps. Personally I am hoping to make some fairly photo-realistic coloured SVGs that can be resized without fuss for different sized screens. I'm thinking of fairly small images, perhaps four times the area of a typical icon. Not having this capability dooms one to keep a library of different sized PNGs to fit different screen resolutions, or rely on any available automatic resizing capability, which can often give less than satisfactory results IMO.
Graham Samuel / The Living Fossil Co. / UK & France
Top

I also have the need for color widgets for a project on which I am working. Inspired by a couple of key sessions at the conference - and keen to contribute towards the 1000 widgets that Kevin would like to see over the next year - I have been working on a color SVG widget. So far it takes a tagged SVG file and parses out the relevant path (plus rect circle ellipse) and associated color information to render the widget. It is resizable - with or without maintaining perspective. I will probably need some help on rotating the image. 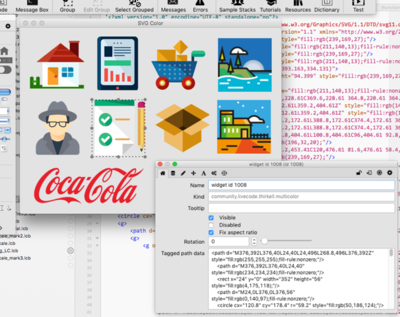 Any comments or suggestions welcome, particularly in terms of the typical uses expected for color icons along the lines illustrated.
Top

Hi pthirkell,
that looks very nice. I do not have any suggestions how to improve. My attempts to modify the SVG widget were a lot more modest and I stopped trying to get more involved because of

In reply to pthirkell, I am encouraged by your experience with color and SVG. I got the idea from the conference sessions that only monochrome graphics were available - maybe I was just wrong!

I have to say I am still rather confused about SVG, scaling and widgets. There is a tutorial about the Pie Chart widget, which as far as I can see doesn't use SVG, but is nevertheless resizable, and being constructed entirely of vector objects, doesn't have resolution problems when resized. Would this have been better implemented using SVGs, or have I completely misunderstood something (quite likely)? I also note that in the wider world, a lot of SVGs are in fact icons rather than larger, more complex objects. Is this the way the mother ship thinks of them, or can we have widgets as big as a screen? I wish I'd asked more questions at the conference, but it was all too new then...
Graham Samuel / The Living Fossil Co. / UK & France
Top

I have persevered with my attempts to create multicoloured widgets, because I need them for another project. I realise that it may well have a short "half-life" because, as Bernd helpfully pointed out, it is intended that full SVG support will eventually find its way into the engine. I don't regret the effort however because it has helped me enormously to come to grips with Livecode Builder. Having multi-coloured widgets available also helps to stimulate the imagination in terms of what becomes possible from an interface design point of view. 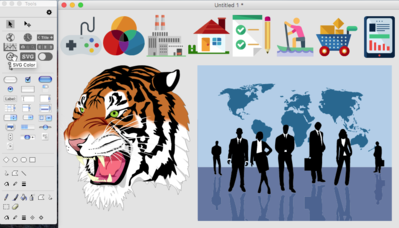 Postscript ... my zipped .lce file is 286k which exceeds the maximum file size for uploading. Alternative options for posting?
Top

Thanks for this really neat widget.

[ps. Although the lce package is itself a zip one has to use the ending ".zip" for uploading it or the parts (to the forums) ---> use button "add '.zip'" of the utility]
shiftLock happens
Top

This is all very encouraging, and thanks for the tremendous effort. I have not lost interest, but my time has been taken up by much more mundane problems to do with getting a production version of a project fully working cross-platform. When (don't say 'if'!) I get out of that wood, I am hoping to study this material very carefully, since what has already been done probably is enough for the project I'm hoping to turn to next. I am not sure if I will ever have the skills to contribute.
Graham Samuel / The Living Fossil Co. / UK & France
Top

I tried to install the LCE file with livecode 9 or 8.1, but nothing happen...
Livecode Wiki: http://livecode.wikia.com
My blog: https://livecode-blogger.blogspot.com
To post code use this: http://tinyurl.com/ogp6d5w
Top

I just tried to build the widget as well. It stops with an error ( in 9)
The TIGER image you are displaying in this thread is EXACTLY what I need ( and then some 2100 of that)

All the best from Berlin
Frans
Software development and Project Management. Audio for Apps
Top

That's why I stopped working with widgets in LC 9, I don't make new widgets any more before a *stable* LC 9 release.
shiftLock happens
Top

Ah.. ok. Thanks for the info. I was under the impression this was so new that it already was for 9. But I will try 8.1.2. Thanks!
I do wish the sprites and colour scalable graphics from the original kickstarter where coming anywhere soon...

I do have a slightly amended LCB script which now runs under LC 9 dp 4 if anyone particularly wants it. However I would recommend waiting unless you really need version 9 for other reasons.

There is a slightly obscure (confirmed) bug in the color picker for LC9 dp 4, but if you only need to display the color widget and not change any of the path colour properties then the amended script should work fine.
Top
Post Reply
45 posts