The latest Developer Preview of Livecode 8.0 features a new set of Black icons in the revMenuBar stack.

Personally, while I think they are quite an improvement on the kiddy-candy icons we have got used to from about version 2.0 onwards
I much prefer a dark menuBar with white icons.

So here's a stack to switch things around.

This is completely non-destructive, even if only because Livecode 8.0 is so designed that one cannot make modifications 'stick'.

I have removed this fil as there is an improved version available a bit further down the page. 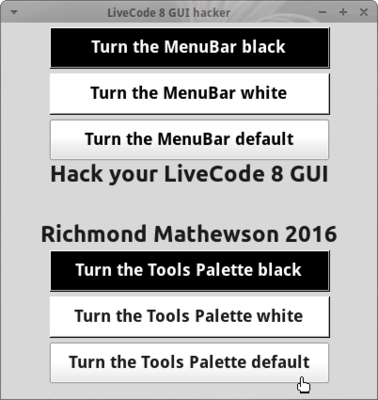 I don't know what you mean by


richmond62 wrote:Livecode 8.0 is so designed that one cannot make modifications 'stick'.

But on a freshly installed LC 8 DP14 on OSX clicking on "Turn the Tools Palette black" I get:

Found the problem the ID of my card was 1126

I don't know what you mean by


richmond62 wrote:Livecode 8.0 is so designed that one cannot make modifications 'stick'.

Agreed. If anything v8 is more hackable than ever.

It was never a good idea to directly modify IDE objects directly, if for no other reason than the value of one's own time: with the very next update any changes would be lost.

IDE hacks are best applied as scripts that modify IDE elements, so the script can be run on startup with a plugin and as such will survive between updates.

I never know when to stop:

This one mucks around with the widget icons as well.

Some people are objecting to the new B&W icons in favour of the previous, multicoloured ones.

The way to recover the coloured icons is to swap out my 'images' folder with the icons supplied with DP 15 here:

images.7z
Sorry about .7z rather than .zip; but I needed .7z to compress the folder sufficiently for the Forum to accept it.
(244.11 KiB) Downloaded 84 times

Thank you so much for that information, richmond62, it allowed me to put some color back into the later ide !