I've noticed that the text alignment in controls such as the tabs, buttons are not centered. In fact they appear to be down towards the bottom. Is there anyway to correct this? I've played with the text formatting and have not been able to do so.

Not sure what you mean. Did you say "tabs"? Did you mean "Tab Menu"? This is just a button, but with lots of special properties, and is directly pullable from the toolbar.

But it has its "tabs" centered, with the labels centered as well. Or did you mean something like a table field? Please write back.. 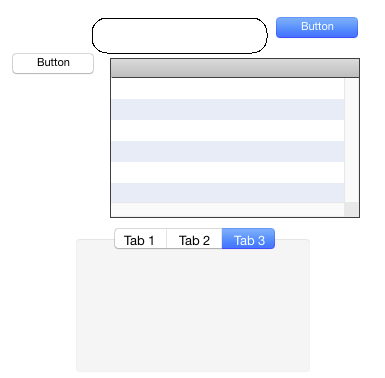 In the attached screen shot, if you look at the text in the button, it's not vertically centered within the control. The same goes for the headers in the tab control.
Top

I am on a Mac, and it is true that the vertical alignment is not quite perfect. But mine are better than yours. Are you on a Mac as well?

I am not sure what property, if any adjusts that sort of thing. I am not even sure that LC draws those controls, or if the OS does. Someone will chime in, perhaps. Fields have two properties, "spaceAbove"and "spaceBelow", but buttons do not.

Of course, you can always make your own control, and nobody would be the wiser.

For regular buttons you can adjust the vertical spacing by changing the bottom or top margins. I've never had to change a tab button that way, margins may just adjust the content portion, but it's worth a try.
Jacqueline Landman Gay | jacque at hyperactivesw dot com
HyperActive Software | http://www.hyperactivesw.com
Top

And that was just the person to chime in. Never knew that property worked on buttons.

The tab menu style of button has those properties, but they do not seem to affect anything if you set them.

I came a cross a commercial application written in Livecode called MatterCat. I downloaded the app from the app store and played with it. the controls look cleaner than what I get. I don't know if there is a tweak or it's just the font.

I really want to like Livecode and purchase the commercial version. But for a person with OCD issues

I'm having problems doing so, when dealing with the community verson. Mainly because of the quirks that I've came across in the UI controls. I can deal with the logic issues, but the cosmetics are driving me nuts. LOL.
Top

But doesn't Jacque's answer solve all your issues? Note that the "templateButton" can be preset to contain the margins you like. Then all new buttons will inherit those attributes.

If it is really true, however, that tab menus do not seem to react to that property, then you simply must roll your own. But even that should not be too onerous, unless you change the number of tabs on the fly. In that case, it would be onerous, but fun.

terryw64 wrote:I've noticed that the text alignment in controls such as the tabs, buttons are not centered. In fact they appear to be down towards the bottom. Is there anyway to correct this? I've played with the text formatting and have not been able to do so.

The issue with the Tab Panel Control is a bug within LiveCode and has been reported many months ago and has NOT been addressed by the LC Programmers.

I won't say all controls are emulated because I don't truly know but I believe the controls within LC are emulated and any issues with the layout are LC's and not Apple's.

I believe the Open, Save and Print dialogue boxes are Apple's controls.

I am in the same situation as you, I have the Community edition and have been evaluating it for some time now but have no intention of making a purchase if the emulated controls don't actually emulate Apple's Controls.

One big issue for me is the Data Grid which is nothing like an Apple NSTableView, scrolls jerkily in comparison and is a scripted bolt on to LC using Groups Buttons and Fields etc to give the illusion of a scrolling table.

In addition I am getting a little concerned (no evidence for this) that with LC 8 they are having Widget development built into the product to allow you to design your own controls and this may lead to a situation where you need to develop your own NSTableView equivalent if you are not happy with the standard DataGrid. As I say, no evidence for this but another reason to hold off purchasing a licence.

There are always workarounds if you want to implement them yourself but that detracts from the reason for using LC in the first place (ease of programming).

Appearance makes the first impression. So why wouldn't want to fix the cosmetics as soon as the issue was reported? Unless it's because of the widget implementation to be included in lC Version 8. Still a month, two or three can make all the difference when trying to influence potential sales or a developer base.

I'm not skilled enough to develop my own controls or UI components. Regardless, I wouldn't purchase Livecode to do so, if I had the skills.
Top

terryw64 wrote:Appearance makes the first impression. So why wouldn't want to fix the cosmetics as soon as the issue was reported?


There are several listings marked as 'Confirmed' in regards to vertical alignment in other controls such as the text field, button, etc...
Top
Post Reply
12 posts • Page 1 of 1