by newtronsols
I was testing/building standalone for Android with Livecode 6.6 commercial on Windows 7 when it froze.

I normally stop the Livecode task - but I restarted my laptop. When Livecode returned it was as if it was the first time I'd used it. There was no recent file list and it started with the splash screen.

Initially this led me to believe that Windows 7 had rolled back to a previous restore point - assuming it was a Windows problem. Now when I use it I cannot test via via my phone; build standalone and it is freezing more frequently.

Is the best solution to remove Livecode and reload from scratch?

I had a lot of problems with random freezes, etc in the 6.6 version. Have you tried using a slightly earlier version? (I am using 6.5.2) at the moment.

by newtronsols
I've tried going back to 6.5 but it behaves in the same way. I tend to build a bit, test a bit - re-build a bit, re-test a bit. Presently working blind/unable to test. Confusing reloading sdk's and different versions of Livecode trying to get it to work again.

by jacque
The freeze is a known issue with LiveCode 6.6 for Windows, and has been fixed for version 6.7 which is at DP 1 right now. You can either try that pre-release version, or revert back to LiveCode 6.5.2.

For the "application class" error:

by newtronsols
Thanks,
I have managed to fix back in 6.5.2 - resetting the preferences. Sometimes you need to have a break to resolve issues. 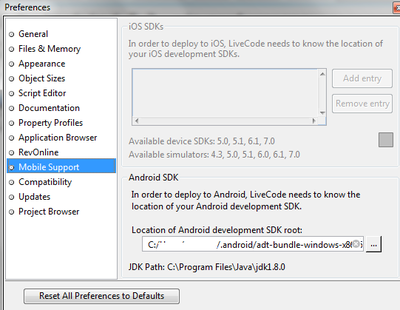