Ok, I have a problem similar to what hit rumplestiltskin, and having re-read the entire thread, I'm not sure why.

The card has a menubar created in the menu editor. I have a group of images I am turning into a toolbar, named as you see here...

I thought I knew what I was doing...

I am using this code to send to the various menus from the messagebox:

When the answer dialog comes up, everything looks as it should as far as I can tell... 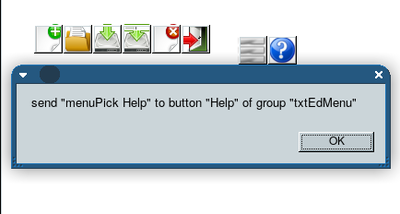 ...but, while every single other image triggers the appropriate menu item, image "Help" fails to ... help heh.
Even though this is (so far) a single stack and card, even specifying the group as Jacque mentioned in the above linked thread produced no result.

Selecting the menuItem (by adding another else if) worked, but I'd rather know why this code works for everything else but 1 image/menu item.

Yes that does work, along with select and a number of other variations, but again I'm curious why 'send' does not. From what I understand about send, call, dispatch, etc (which isn't much I grant you), they should all work reasonably on par with this type of command, shouldn't they?

I'm really starting to think it is a bug somehow.

May be
a) the menuMode property of your "Help" button is empty (i.e., not set to one of "pulldown", etc.), so menuPick doesn't answer
OR
b) menuPick requires a minimum of two items? (your Help button has only one, while File and Edit have many).

Good assumptions Sri, but as I mentioned in the 1st post

...which by default creates the menu buttons as pull down and, in the help menu, with 2 items (not counting the separator)...

and of course, the structure created by autoScript in the tool creates a menuPick handler...

Something else I tried that failed to produce the desired result was changing the 'Help' item to 'Contents', thinking perhaps the 2 help names were creating the conflict, but I didn't really see that as a reason for hope, and it wasn't

Oddly enough, though, this *does* work -

So, now I'm trying to figure out why the 'do' command doesn't seem to do that one combination for the help menu

Created and submitted bug report 22052, as I didn't find anything else with the exact same symptoms.

I suspect the 2nd item of the send command needs to be in quotes to make sure it is going to work, and that it working for the majority of items as is is a 'fluke'.

Using a variable with send does also work:

Easier than messing with quotes galore.

Well, I put up a small video to show the way the handler is structured (so far, I plan to skip the 'do' part in the future). You can see the items are already in a variable in this video, so you and I are merging onto the same lane as it were (scary, isn't it?

), but that didn't make it work in this case

I liked your solution so much I've decided to just go with it. The final handler setup -

Easier than messing with quotes galore.

Thanks again, Klaus, it will be in the next tutorial