Is anybody else having this issue? This was just released on 9/12. The IDE is impossible to use for the Community edition for Windows version of 9.0.1. It is super slow and typing creates stuttering of most characters.
Top

I have this issue with the script editor since quite some time in Windows 10, and i will not move to Apple computers. I suggest turning OFF everything that has to do with autocomplete, etc. Sometimes, I use a separate text editor instead and then paste the code into the IDE editor. Keep all at bare minimum. I also read that it is better to close the message box and other IDE windows that are not absolutely necessary. I hope, someone will attend to Windows versions and improve speed in general. My users all use Windows and nothing else.
Top

try this in a button...for me on my Win 10 machine this helps to reset the speed for a while.

I've had the same problem for quite some time, but with version 9.01 (Indy, STABLE) it has become even worse. On start LiveCode is running fine, but after a few minutes of using it, it begins to stutter increasingly. Sometimes it can take up to 30 seconds before I can press a button, edit some text or save the program. It's almost unusable like this now. I have to close and restart LiveCode every ten minutes.
I am using Windows 10 on two completely different computers (office and home) - on both I have the same problem.
Since the problem doesn't exist on Mac computers, there seems to be some severe problem in the Windows code. I'll try the workaround with emptying the messages - but I think this is a serious isssue that should be addressed and fixed properly and with priority!

(author of the German LiveCode-book)
"irgendwas is immer"
Top

I'll throw in my own experience here for what it's worth, to confirm what those above and on other threads have said. Using 9.01 stable, Community, on Windows 7 and 8 variously. Slow downs mainly experienced in script editor, message box and dictionary, to the point of unusability.

This has not just been on 9.01 but I think it has become worse with this version. Some experimenting on previous versions has showed me that the cut-off point, on my systems at any rate, was 8.0. From that point on there's slowness. The first time I tried version 7 it was like a breath of fresh air. Opened the Message Box, started typing, and it was just like ordinary typing - no lag between what I typed and what appeared. Amazing!

So now I mainly use version 7.1.4. I'm not so far needing anything that would require a later version. But of course that could change, and anyway it would be nice to be up-to-date... (eg there's Andy Piddock's excellent All-in-one search stack... I'll drop into 9.01 to use that).

I don't experience the things what is said above on Win10-64bit using LC901Community.
And yes lc7.1.4 was much faster indeed. LC9 is perhaps a bit slower due to the checking of what is typed.

But i don't need the speed while typing in script, i'm thinking how the script should work as i type. It's not a word processor where i have to type in dozens of A4's with text.

To clarify - I'm not talking about "speed" in the how-many-ticks-a-loop-takes sense. (Just mentioning this in the context of the talk there's been about comparing different LC versions in that sense of "speed"). I mean just speed of typing within the IDE. Other people have mentioned slowness in the IDE overall eg when it comes to dragging, resizing controls, saving etc; I've not experienced that. For me it's specifically in IDE text input.

"Speed" in the typing sense I see as pretty binary. Either: You press a key and the letter appears on the screen. Or: you press a key and the key you pressed appears on the screen 10 characters worth of typing later on. To me, that makes typing impossible. For me, in any version > 8, typing in the message box is like watching a slow-motion tickertape.

I've tried the delete-prefs trick, to no effect. The only autocompletion feature I can find is "interactive search" in Script Editor preferences and I already have that switched off. Are there any other settings I could look for that would eg affect message box and dictionary?
Top

Most useful advice I have heard: turn off the Project Browser when not needed.

Not great advice, but most useful.

DavidF. wrote: ↑
Thu Oct 04, 2018 2:26 pm
The only autocompletion feature I can find is "interactive search" in Script Editor preferences and I already have that switched off. Are there any other settings I could look for that would eg affect message box and dictionary?

Some of the auto stuff you can turn off which some times helps the issue your talking about would be under the script editor / edit / options menu. Live errors is usually the biggest offender. 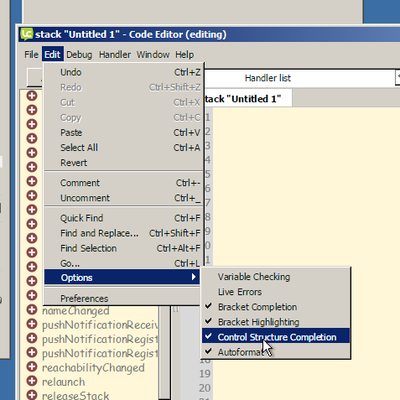 Other than that, what SparkOut said is the most suggested option. 9.x seems to work best if your flow keeps the minimum number of windows you absolutely need up.

Thanks Bogs, strange to say I had never noticed those options before, I will try them out.

I did a complete reset and I switched off most of the autocomplete and live-error-stuff - and I avoided the Project Browser(what if you need it?) - and the speed improved... at first.
But after half an hour of working I got into this slow-motion state again. The project isn't even big - two stacks and two hundred lines of code. As I mentioned before - for me it's not just about typing speed. Everything slows down and freezes for a few seconds. On two different computers - same problem. Always after a while of working. Switching between windows, saving the code, pressing buttons - everything goes to slow motion and makes work almost impossible.
I found out that the speed is perfect as soon as I suspend the development tools. Nice for testing, but still not at all satisfying for working on a project.
The fact that some people don't experience this makes it even stranger. But I know - also from my German forum, that I am definitely not the only one with these problems. On Mac this problem doesn't seem to exist.
Meaning: I am not happy with advice for tricks and workarounds making it a bit less obvious. I think this problem should really be solved! Or could there be something wrong with my Windows-system(s)? No probems at all with LiveCode 7.x and before...
"irgendwas is immer"
Top

I hope you understand that my reply wasn't to show you a 'trick' or 'work around', but a direct answer to what you were asking

As far as the speed / stability issues go, I completely agree with you, resolving it should (I think) be a primary target. One thing you might do is look for and, if it exists, add yourself to an existing bug report in the quality db. If it is going to be resolved, thats where you would start.

In the forums, what your more likely to get is tricks and workarounds until it is resolved

@bogs: Sorry, didn't mean at all to criticise your advice - of course this is helpful and I appreciate that, really! What I wrote was more addressed to the people experiencing the same problems, to tell everybody: We shouldn't accept to go on with some workarounds any longer - we need to be able to use LiveCode on Windows as it is meant to be!
I am advertising LiveCode all the time with articles in magazines, my book, my blog and forum - and very often I have to defend the LiveCode IDE, because there are many people around who don't trust LiveCode, thinking it's just a toy. No, it is not! But it has to work properly!
Thank you again - your hints have made it a bit better for now. As far as I know a bug report has already been filed, but I'll check again!
Last edited by kroka on Mon Oct 08, 2018 8:00 pm, edited 1 time in total.
"irgendwas is immer"
Top

Glad to hear it kroka

Make sure you add yourself to the BR, comment in the section and get the notifications. Encourage anyone else experiencing it to do the same. This is one kind of thing where it really is "the more the merrier", as it shows how much of an impact this issue has.

I would say all supported platforms, but I still agree with the sentiment