Very Hard to learn for beginner

Attached is a screenshot of a random chosen function from AUTOIT a basic scripting lang.

they have very detailed documentation without having to mess around on forums and online searches for how to use in real life .

very nicely laid out .
i see no reason why this great lang could not be as nice . 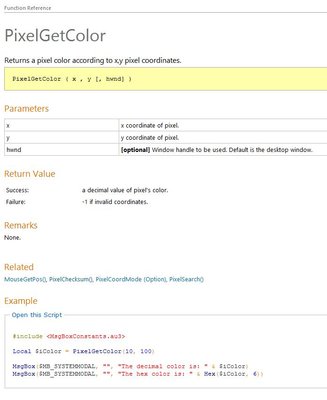 A compact page from that dictionary. Here is one from the v.6 LC dictionary, for the random function: 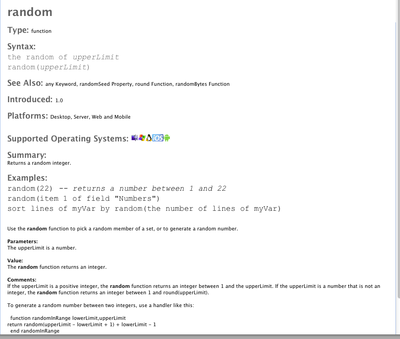 Pretty similar. Many pages from the LC world are far more detailed and longwinded, as I am sure others from your offering are.. The point is that I see little difference between the two, and I am still puzzled why you think this resource requires going on line.

They are both very similar, with the exception that LiveCode has various platforms and needs to communicate which platform the command, etc., works on, security issues, versions, and so on. I could see an argument for moving summary and examples under syntax at the top of the page. I think, those are used more often on a daily basis then platform information and so on. Perhaps the platform, etc. could be hidden under a collapsable section on the page to make the page look less complex. But all that information is needed.
Top

I was little sheepish about posting a page from the v.6 dictionary at all, but I saw that the format was similar to gurusOnWheels sample.

I do not want to get into another to-do about v.8 formatting and graphics. So please, someone chime in...

@GurusOnWheels (note way-cool internal capitalizaton). This is has nothing to do with you. Sort of an community inside joke/squabble.

If you want a fight, you can have a fight; but all that will happen will that everyone will have
bloody noses.

If, however, you approach Livecode in this way:

1. Don't expect everything to be on a spoon for you.

[ When have you ever experienced that: after all, at school we have to make an effort and learn? ]

2. There are lots of people who watch this forum and who are more than happy to help,
but if you become combative so will they.

well, i don't want to have a fight, but it seems that no critical views are allowed, so anything will be a fight.

and if that the way you want it to be, then ok for me.
Top

Richmond is very protective. And we have had unpleasant skirmishes in this forum in the past from rude and unruly, likely young and brash, persons. Your posts do not fall anywhere near that level of confrontation at all.

So again, sit back and restart. Remember what I first said, that if you mention spinners at all, you are ahead of yourself. You can use them, but will not be able to make them. Learn to make them.

hpsh wrote:well, i don't want to have a fight, but it seems that no critical views are allowed, so anything will be a fight.

I hope you won't allow one member's ill-considered post to turn you off to the value of these forums. Any sufficiently large community will reflect a wide range of personalities, some more contentious than others. But as you've seen in this thread, most of the folks here respect the forum's mandate of assuming good intentions wherever we can, and FWIW I've seen nothing but honest questions from you.

Feedback on areas that would improve the user experience with LiveCode are always welcome. Most of us here fully recognize that compared to many other languages LiveCode is an uncommon way of working, so even though it offers equally uncommon productivity once you get the hang of it, getting a good orientation is an important first step toward proficiency.

The challenge with token reference documentation in any language is finding the optimal balance between breadth and essence. Too much detail is not only expensive to write (at a certain level prohibitively so), but can also make entries that are too long to read fully, risking essential details being overlooked. But on balance, of course we want sufficient essential information to allow the token to be understood and used.

I've attached a screen shot from the v9 Dictionary, which in terms of content and presentation is very similar to v8's. As versions go forward you'll find documentation, like the rest of the toolkit, continually improving, and there have been some enhancements with several Dictionary entries in v9.

But by and large, comparing the screen shot you provided (thanks for that - good to get a concrete reference) with the ones we've posted for LC here, they seem quite similar in both structure and scope.

It seems the key difference in the usage example included in the screen shot you posted is that it's longer because that language requires more steps to use it. LiveCode is a very loosely-typed language, with the few variable declarations it supports largely optional. LiveCode doesn't usually require declaring variables in advance, as it can tell from usage when it will need to allocate memory for them, and does so automatically. LiveCode provides an option to require variable declaration for those who prefer it, but for its own code execution that's not at all necessary.

So if the one- or two-liner examples in LC's Dictionary seem sparse, in most cases it's because that's all that's truly needed to use the token being described.

As with any documentation effort of this scope, from time to time we find Dictionary entries that truly need revision or expansion. When we find them, we usually add a report about them to the bug database. And since LC is an open source project we have ongoing efforts from both community members and the core dev team to address those as quickly as we can.

If you find an entry insufficiently clear to allow you to use the token it describes with confidence, let's look at that and see what specific recommendations can become actionable. The docs contributors have a strong track record of addressing such things quickly. Bugs for docs or anything else in LC can be submitted here:
http://quality.livecode.com/

And of course if you're not sure about how a Dictionary entry may be enhanced, feel free to discuss here in these forums. We have a Bug Triage section in the forums for this purpose, to discuss things that may be improvable but could benefit from brainstorming with others to find the best way to address it:
http://forums.livecode.com/viewforum.php?f=104 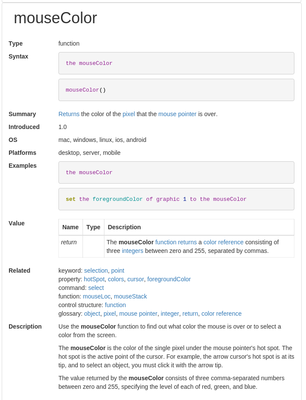 But I want you to tell me how it came about that you thought the style and structure of the LC dictionary, forget which version, was either so lacking in content or missing as a resource entirely. Was it just that you did not know where to look? Same question goes for the User Guide and Tutorials. I understand that the handful of excellent websites, all managed by members here, might not be obvious.

Because if that is the case, then the team needs to make that much louder and clearer; I would hate to think the community lost people just because they found it difficult to even know where to start.

The "problem" with your initial posts was their tone rather than their content.

I know what this can do having been guilty of adopting the wrong tone far too many times,
my message was more to protect you than suggest that you and I climbed into the boxing ring together.

The LiveCode documentation is not perfect, far from it, but it does go a long way, and coupled
with a bit of lateral thinking it can go even further.

I also believe, as a teacher of many years experience, that if one is given everything explicitly and
doesn't have to learn anything by actually doing it one won't retain that information long: i.e. experiential
knowledge might have more lasting value than theoretical knowledge.
Top

i can tell you that coming from autoit that im completely lost and do not know where to start .

and the program and documentation does not make anything clear ...

the only thing it makes clear is that it want to promote its book
and promote its learning academy .

makes me wonder if the documentation was made vague for this reason .

just 5 days into owning the license and there already trying to strong arm me into buying the web addon .

gurusonwheels, of the User Guide chapters I suggested above (included in the IDE installation), how many of those have you read?
Richard Gaskin
Community volunteer LiveCode Community Liaison
LiveCode development, training, and consulting services: Fourth World Systems: http://FourthWorld.com
LiveCode User Group on Facebook : http://FaceBook.com/groups/LiveCodeUsers/
Top

FourthWorld wrote:gurusonwheels, of the User Guide chapters I suggested above (included in the IDE installation), how many of those have you read?

i think maybe ill go back to autoit . seems those people do not attack there members ....
i wish you all good luck .

but from a newbie point of view this product is a long way from having the value they think it has ...

i mean simple things like adding a data grid . instructions are scattered everywhere .
not one place . everywhere .

templates in the datagrid do not work without editing the source ... thats just crazy
if i edit the template livecode should be smart enough to make the code changes to get the visual part working by itself .

at any point . very very difficult to understand its methods .....

maybe the cross-platform is not for me . im only interested in windows and android . nothing else.

non of this really is the topic of the OP though . it was about the missing examples which i believe i figued out .

when a new user installs v8 when you check for updates it says v9 is available . . so i let it update .
v9 is a beta or alpha so documentation is not finished and examples in missing everywhere .

maybe the program should not offer updates for unfinished products .
Top

richmond62 wrote:The "problem" with your initial posts was their tone rather than their content.

If "tone" is the problem, isn't the appropriate response trying to tone it down rather than escalate it? Just wondering.

The inference of tone or attitude on the basis of written words is fraught with danger in situations where English may not be the native language of the poster (as is frequently the case in online interactions). Then there is the cultural variation in what is considered acceptable in interaction between strangers (I have noticed that Klaus's good-natured humor sometimes gets misunderstood by first time visitors to this forum, who are not familiar with Klaus's record of caring and helpfulness.)

Some of us in the United States feel dejected by the triumph of nastiness over respectful reasoning in public discourse in recent times. I hope it doesn't become the norm.

"Speak the Truth, but gently" - Buddha