I suggest an other way without cloning

The more recipes for achieving one goal the better; even if only to prove how versatile
Livecode is.
Top

it can't be removed once placed

I solved that by putting empty into the script of the letter tile once it has been placed
as I could think of no other way to perform an "ungrab".

To do that I had to both modify the code in the field "fscrip" and introduce the button "CHANGER".

I also popped a colorOverlay routine in there so that the cloned tile did not blend into the background
of the tile templates. 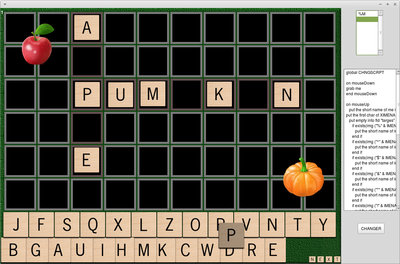 Things still to do:

1. Prevent the possibility of piling multiple piles in one location [is this strictly necessary?].

What does one do for chronic piles?

3. This [cooperative programming] should be at the heart of Open Source software.
Top

One more thing you might consider, get rid of field fscrip entirely. Since you're doing a name change of the new tile, its easy enough to add a conditional to your code.. if the short name of me contains ".jpg" then do the clone stuff.. (and "set the script of.." will no longer be necessary) and of course the else would contain the stuff that you had in field fscrip.

This gives the benefit that your script can be edited all in one place. And in fact, if you move it to the stack or card script you won't have to update the script for each tile, the script will truly be a one off. (a behavior would work for this too) If using it in a card script use "the target" instead of "of me." You'd still be checking the name to determine what to do on mousedown and mouseup, to make sure you ignore anything that is NOT a tile.

Follows is a card script (in the script of the card containing all the tiles" that demonstrates. Actually commented this time.

One more thing you might consider, get rid of field fscrip entirely.

Yes, of course, except for the thing that I am a very conservative chap who ettles after "seeing his laundry hingin on the line".

Also, as I am not working with millions and millions of line of code (which I have elsewhere) I am not desperately trying
to shave microseconds off processor time. "Elegant" code is most definitely NOT my thing, Code that works IS my thing.
I would not doubt that there are folk who can spend days (and are prepared to) refining my offerings into far faster, far more efficient
things; but some person told me after I'd spent a day making cotter pins with iron rods, a mall and a vice that I cud hae ordred them
fae a supplier in Aberdeen; to qhilk I reponed, "Aye, and wait fae twa week til the boat fae Aberdeen til Kirkwall gets here wi yon pins,
an then I've ta tak the bus intil the toun, shoogle doun til the docks an keek aroun til ah've foun yon mon wi the pins, by qhilk ah've lost
twa days an mun be 50 pound, an ah'll ahe a scunner o a migraine forbye o the bars.' And eftir that collogue I juist connectit ma tractor
til the wain and drove doun til Linksetter fae the stane gatherin wi'oot a glisk ahint masel.

I probably learnt as much, that has subsequently served, working on a farm on Orkney, as I learnt at the 3 Universities I hold degrees from.

That is why my older son went off to work at the cash desk in a supermarket in the Turkish quarter of Berlin before he went to Munich:

Lest you be mistaken, he's the one with the Mohican.
Top

1. Prevent the possibility of piling multiple piles in one location [is this strictly necessary?].

Yes it is necessary and fixed in CRAZY LETTERS001 ?

The user have to maintain mousedown to grab a letter. That is often not easy for children
It is not necessary in CRAZY LETTERS001
Top

The user has to maintain mousedown to grab a letter. That is often not easy for children

I don't know about that: I am dealing with children of 5 years and up, and they have sufficient motor control
that they can keep the mouse button pressed.

NO: I'm very sorry, I'm dancing around like a cat on a hotplate right now getting things up-and-running for my
new school year.

NO: I'm very sorry, I'm dancing around like a cat on a hotplate right now geting things up-and-running for my
new school year.

Dont worry. That is the same for me (new year, new students, new teachers)

...I am dealing with children of 5 years and up, and they have sufficient motor control
that they can keep the mouse button pressed.

Yes, but I think accessibility is an important point

I promise (!) to take a look at your variant within 3 days.

I did, and the first thing that happened was that my right index finger
twitched so I did 2 mouseDowns on the "E.png" template and got in trouble:

first thing that happened was that my right index finger
twitched so I did 2 mouseDowns on the "E.png" template and got in trouble:

I just tested and it works here
Top

I cloned the letter 'E', and then clicked on the new 'E' and got what I posted earlier:

In fact it would be of great help if one or two other people downloaded your version and tried it out
and then posted some feedback here. 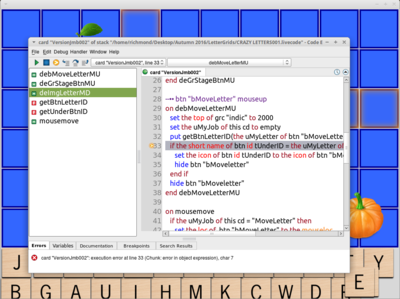 I owe Mike Bonner an apology for not looking at his "bash" at this stack until now.

It's always fantastic to learn something new. 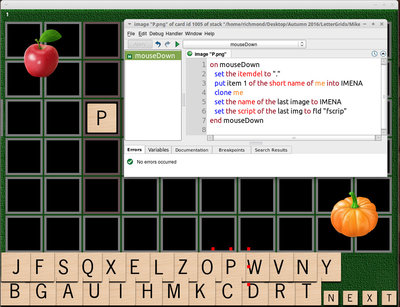 And THAT is SO, SO much more elegant than my nonsense:

Yes. Itemdel is a good way but don't forget to set the itemdel to the previous

I fixed the bug in debMoveLetterMU. Sometimes tUnderID is empty