can someone from live code explained why only in the business version?
are you gonna start start having different features for different versions?

i was under the impression that the differences where support and the amount of revenue we made, which i think is perfectly fine.

but features?, should we be worried?,

should i run and buy a book on swift code?

I have to admit, I do find the fact that they are spinning off new business and indy only features while many of the original kickstarter goals are still unmet and continually kicked to the bottom of the Roadmap to be troubling.

I do agree with u completely .
Top

While this probably isn't the best place for this thread in general, I'll contribute my half a cent while it's here.

Here's a response from LC support to an email where I was basically asking the same thing. Mostly dodged the question. 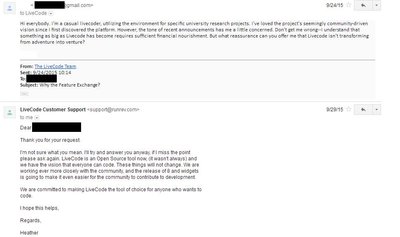 Open source doesn't mean free, and I think they understand that very well. Maybe it's the cynical side of me, but I can't help but wonder if widgets were created ultimately to group-source better development ideas for later incorporation into the paid versions.

(If you need a PDF viewer though, you can make one inside a browser in LC.)
Top

Hi theotherbassist, Pistris and ClipArtGuy, I am the main advocate for LiveCode Open Source within the LiveCode core dev team, and maybe I can address some of these issues.

The core dev team needs to eat and pay rent, so LiveCode Ltd. has to make some money to help support LiveCode development. The vast majority of work we do (90%+) goes directly into the Open Source edition of LiveCode. To raise money to pay the core dev team's salaries, the company sells Indy and Business subscriptions that let people make closed-source programs with LiveCode.

The revenue needs to grow, so that the core dev team can expand, so that all the things that people are asking for (like Raspberry Pi support, further work on HTML5 deployment, an improved networking library, etc.) can be created. This means getting more people to pay for subscriptions. However, many users don't think that Indy and Business are good value for money because "all" that they get is closed-source deployment. To help these users justify upgrading to a subscription, the company has bought in some externals from 3rd party vendors and bundled them into the Indy and Business editions -- first mergExt, and now a PDF external.

At the moment, I am struggling in internal discussions when I argue for bringing neat new features to the Open Source edition. Evidence over the last year or so suggests that adding a feature to the Business or Indy edition makes a much bigger boost to subscription revenue -- revenue which funds improvements and maintenance of all editions of LiveCode. Even when you consider the new Business-only features like the PDF viewer, these still reflect a minority of the work we do; taking these into account still leaves almost all the work we do going directly into the Open Source edition of LiveCode.

In many ways, I feel that at the moment the best way to get the resources required for maintaining and improving the Open Source edition of LiveCode is actually to add Business-only features. Do you have a better idea? For example, some people have suggested keeping the source code on GitHub but charging people for access to Community builds as a way to get revenue to support the Open Source edition. What do you think?
LiveCode Open Source Team — @PeterTBBrett — peter.brett@livecode.com
Top

Pistris the reason why mergAccessory is business only is because when LiveCode took exclusive license I advised it would be better in the Business product due to the level of support usually required for users based on my experience selling it for a few of years.

ClipArtGuy mergExt & XPDF have had negligible input from the core team thus far. They were acquired to improve the product differentiation as Peter pointed out. It's worth pointing out that a number of open source externals came along in the mergExt accusation and it's not a small thing for LiveCode to take on the maintenance costs of those.
LiveCode User Group on Facebook : http://FaceBook.com/groups/LiveCodeUsers/
Top

First let me say that am a business owner and how to increase revenue takes good portion of my thinking daily.

I know everybody has to pay their bills, and not just pay their bill but make good money so can do whatever they want in their lives, after all i think this is the only life we are gonna live.

Second, Dont say "that the vast majority of the work you do (90%) does directly to the open source edition" like you are doing the community a favor, THE COMMUNITY PAID,
The community was there when you need it. To seek "free money" was a business decision, RUNREV's business decision. You could have gone to a bank to get a loan and pay interests or get business partners and share revenue
but you decided to get it from the community.

So now what?, where does it end?, how many version?, who gets what?, at what price?

peter-b wrote: At the moment, I am struggling in internal discussions when I argue for bringing neat new features to the Open Source edition.


I'm not asking for "neat new features", I am asking that the community funded kickstarter goals be met before spinning off business and indy only features. As someone who has donated to both crowd fund efforts as well as maintaining a current license, I don't think that is too much to ask.
Top

I FOLLOW the logic that bills need to be paid. That is why we contributed to the fundraiser, and why we are an INDY license. But the logic FAILs when you make it EXCLUSIVE to the most expensive "paying" option.

I OBJECT severely to the PDF being ONLY available to Business license. PLUS being emailed several times suggesting we should upgrade to business license to get the PDF external. I would rather spend that money (and probably more) to develop our own PDF external (and maybe offer it to everyone for $50). Or maybe start a kickstarter to fund our own external.

In my view, the ultimate objective (to grow your sales among other things) would be to GROW the LiveCode user base, which is currently less than 250,000 programmers. The Open Source community is how you do that. Requiring people to buy a $2500 Business license JUST to get functionality like the PDF, is NOT how you grow your base.

Bills have to be paid. I understand that.

If you're looking for new ways to bring in revenue, why not charge a much smaller fee for a single-version-of-single-app closed-source license? As a student/dad, I'll probably never be able to scrape together enough or justify spending the cost of an indy license. But I would absolutely consider spending a smaller amount to be able to legally distribute a single closed-source app (especially given that the apple app store won't accept open-source ones).
Top

I finally heard back from LC in response to several (about a dozen) emails I sent about the "business-only features" where we relayed many of the point people have raised here.

Their reply was less than helpful and ended with " . . . If our tool/licensing does not work for you, and another one is better, then that is what you should choose."

Which to us, reads like - if you don't like what we do, or what we charge, tough. Choose another tool.

I just don't get the feeling that building their user base, or paying attention to any discord among the users, is the focus of the powers that be at LC. It appears to be more about the money.
We are investigating the possibility of developing externals ourselves, and/or a kickstart to do that rather than fork over money for business lic, just on general principles.

To start with PDF! lol

Got another wonderful reply from LC today:

"We cannot please all of the people all of the time. It is unrealistic to expect to. Being blown about
by individual requests for differing things is also not a good way to operate. We do our best to provide
what the majority of our customers want and need. . ."

As I pointed out to them, THIS "business only" features (upgrade or go somewhere else) policy change is not pleasing ANY of the people ANY of the time.
It is one thing not to be "blown about" by various "wish lists", quite another when you do something that does NOT benefit your widest user base in any way and, frankly, pisses them off.

Truthfully, I am beginning to feel like LC does not care much for their Indy users, and even less for the Open Source community. They got paid - via kickstart and the community! - for that Open Source effort. Now, they see no real benefit to Open community.

So it appears we will have to do it ourselves, or do what they suggested to me - choose another tool.

It may be helpful to review the specs for the PDF external included in the Business Edition. It's very specialized, with its strongest value in getting and setting selections within the document, something very few apps need.

PDF generation has been built into all versions of LiveCode, including the Community and Indy editions, for many years, and PDF rendering is available in recent versions, including Community and Indy - Kevin wrote about the latter recently on the discussion list:
http://lists.runrev.com/pipermail/use-l ... 26717.html

Somehow their delivery of an embedded PDF renderer with the CES browser engine has been overlooked by many, including yours truly. But with that and with the PDF generation we've had for years, most common needs for PDF handling are rather well met with LiveCode, in all editions.
Richard Gaskin
Community volunteer LiveCode Community Liaison
LiveCode development, training, and consulting services: Fourth World Systems: http://FourthWorld.com
LiveCode User Group on Facebook : http://FaceBook.com/groups/LiveCodeUsers/
Top

Just wanted to put in my 2cents:


I once bought one of the Livecode bundles (before it went open-source, a few years ago) I briefly had a WTF!! moment that had to do with the browser plugins (there used to be browser plugins..), and I had a rant very similar to this thread. I was upset. I had some pretty good logic, and I felt that Livecode team had gone back on some promises, by not doing something (cannot remember what it was exactly..I think it was about plugins for Linux browsers).

I never really ended up needing the mentioned plugin, and since then have moved on to using different methods (via Livecode Server) that are more secure and make much more sense. The Livecode team was actually a few steps ahead of the game already. I was just getting myself worked up. As usual, Richard provided a cool-headed reply to my rant.

The truth is, I have always found the team to be very helpful and responsive, and Livecode (to me) keeps getting better all the time. I just use it for small projects at the moment (using open-source), but have been studying in the hopes of moving to some bigger projects. I enjoy the syntax, the interface, and getting good help on the forums when I need it.
Top
Post Reply
20 posts