Sure. But I have a vague recollection of a conversation with Mark Waddingham about the accuracy of measurements smaller than milliseconds. I got the impression such things would be approximations, perhaps not all that different from what we could obtain with arithmetic on milliseconds. Do I misremember?
Richard Gaskin
Community volunteer LiveCode Community Liaison
LiveCode development, training, and consulting services: Fourth World Systems: http://FourthWorld.com
LiveCode User Group on Facebook : http://FaceBook.com/groups/LiveCodeUsers/
Top

Apparently. The current code gets the microseconds, then divides by 1000 to return the milliseconds.
Benchmarking, of course, will depend on the overhead of the enclosing code, and that may be what Mark was referring to.
PowerDebug http://powerdebug.ahsoftware.net
PowerTools http://www.ahsoftware.net/PowerTools/PowerTools.irev
Top

Hi, Mark. I share the motivation, but satisfy it with "the long milliseconds," which distinguishes nanoseconds. That maximizes precision, and, with enough test results and additional measures ( median, standard deviation, and many more), accuracy beyond milliseconds. (Disclaimer: I'm not a statistician.)
-- Dick
Top

Dick- do you actually have code that returns the nanoseconds? Er... long milliseconds?
The best I could come up with cross-platform is microsecond timing.

Oh... wait... the "long milliseconds" is built in?
Learned something new today.
Would be nice if that were documented.
PowerDebug http://powerdebug.ahsoftware.net
PowerTools http://www.ahsoftware.net/PowerTools/PowerTools.irev
Top

On Win 10. Have fun!
Livecode programming until the cat hits the fan ...
Top

Um. On Windows I think the code needs to use a different call to get more resolution.
That's part of what I implemented. You need to call both QueryPerformanceFrequency and QueryPerformanceCounter to get the microseconds.

Multiple (average) runs should always be used to profile code - particularly if the thing you are measuring has such a small timing to be < 1ms.

On multi-user, pre-emptive multi-thread/process systems there's too much going on to be sure that any single run is representative (again particularly if the event being measured only lasts for a tiny amount of time - a single page fault requiring a fetch of a disk page from a hard disc which has spun down can completely obliterate any meaningful results when you are looking at microseconds, for example!).

There's also the overhead of making the time measurement and processing it in a higher level language like LiveCode Script to consider too.

In regards to the current notion of 'time' - the core measurement is 'the seconds' - this is the number of seconds since the UNIX epoch (so is intimately tied to the datetime functionality).

This value is computed as a double internally - `the seconds`, `the ticks`, `the millisecs` are that value scaled and floored (so they are integers), the long variants don't floor (so you get fractional parts).

On Windows the time is seeded using _ftime (a C library function which returns the UNIX time), and then it is updated using timeGetTime - which has millisecond precision.

This is, admittedly a rather archaic mechanism and how the engine has always computed MCS_time() on windows. The logic behind it was performance I think. The equivalent 'gettimeofday' in the Windows API used to be really slow whereas timeGetTime has always been super quick.

These days there might well be a better system call to use to get higher-precision timings on windows - but replacing the current mechanism would need to make sure it is indeed as fast or faster than the current method (as MCS_time() - the core method - is used a lot) and also retains parity with the system-clock (i.e. an absolute measurement relative to some well-defined epoch - so it can be shifted to be UNIX time).

NB: QueryPerformanceCounter is certainly fast - but it isn't 'tied' to any external clock - so can only measure relative time, not absolute making it unsuitable for a replacement to MCS_time() (I have used it quite frequently for internal performance benchmarking on windows at the C level as its a really simple API to use - but I'm still careful to ensure I time enough loops of whatever I'm doing to make sure the measurements are useful!).
Top

That in itself certainly hasn't changed, but a more granular approach to timing can result in orders of magnitude benefits.

As usual, you make several good points here.
But I think benchmarking and profiling are related but different actions with different objectives.

In profiling code the objective is usually to find the areas that can benefit from optimizing, and therefore the relative speed of code with relation to other sections of code is important. You often don't get the chance to run multiple loops if sections of code are executed once only.

The problem there is that single lines of code don't normally take milliseconds to execute, and so you end up with zero milliseconds. Averaging several of these will still give you zero. A sub-millisecond result will enable the averaging of fewer iterations, and even with just one time through will get you into the ballpark. "Accuracy" of timing is always going to be a bit fuzzy - in my profiler I current set a floor of 1 millisecond to avoid the averaging of zeros problem. This gives what I think is unacceptably inaccurate real-world timing but usable relative timing.

That said, the "long milliseconds" gives me what I need since I don't really care about Windows.
PowerDebug http://powerdebug.ahsoftware.net
PowerTools http://www.ahsoftware.net/PowerTools/PowerTools.irev
Top

The "Long Milliseconds". Fascinating, and yet undocumented.

I have a friend who would love to use LC to control a homeMade CNC milling machine. He uses assembly language now, because he cannot get LC accurately to know what time it is. The milliseconds don't cut it.

The long milliseconds would. But before I present this possibility to him, has anyone ever figured out a way to determine how accurate they are? Even if I dropped the three least significant digits, yielding only "the microSeconds" (which would be fast enough), it matters not if the accuracy is not there.

What do you run as a standard with which to compare? In other words, if you run a process in LC that takes 1,000,000 long millisecs, say, and then run the standard for the same length of time, how do you read the standard? It does not have to be perfect, just close. I assume there will be losses here and there along the way.

Assembly? Why not cut the development time by 90% and use C?

I made a little stack that compares long milliseconds and milliseconds statement and for what it is worth there is a difference in Windows 10 64b with LC 9.6.1. and sometimes a fractional part is shown as well. However, I do not know how reliable it is. 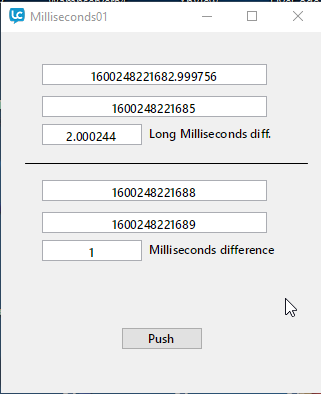 This is the stack.

I think he is just comfortable, and old fashioned, using assembly.

I think I may have misrepresented what I meant about accuracy of timing. Ultimately, in any computer, the system clock rules. If someone wants to control an outside process, like moving a milling head with servo motors a precise distance in a precise time, both the accuracy and resolution of the "output" matter.

In order to use LC for this, and I have been promoting the idea for years, he needed better than millisecond time resolution. That this now seems "internally" possible still begs the issue of how to output control signals, likely through the USB bus, to his custom-built software/hardware interface.

I have been doing this sort of thing for years, using (and touting) an interface made by a company in Germany. But my work has never been nearly as time sensitive as his. That gadget internally can only get down to about one millisec resolution, which has been fine for everything I have ever done.

In matter of fact, his controller requires only that signals be regular and consistent, not necessarily accurate with respect to any other particular timeFrame, either internal or external. Anyway, I will keep thinking about this before I open the discussion with him again.

mrcoollion- your stack isn't really showing anything useful because of the time it takes LC to execute another statement, and more importantly, to update a field on the screen. Locking the screen would help, as would putting the results into variables before the subtraction and *then* updating the screen. But even so, executing two similar commands in sequence is bound to have different microsecond results. while millisecond results will have a higher probability of having the same value.

mwieder wrote: ↑
Wed Sep 16, 2020 4:27 pm
mrcoollion- your stack isn't really showing anything useful because of the time it takes LC to execute another statement, and more importantly, to update a field on the screen. Locking the screen would help, as would putting the results into variables before the subtraction and *then* updating the screen. But even so, executing two similar commands in sequence is bound to have different microsecond results. while millisecond results will have a higher probability of having the same value.

It was just made to show me that on Windows there is a fractial part the rest was just there to see how fast the engine does those two commands for fun. No serious purposes intended.
Top
Post Reply
18 posts