by bogs
Oh, I could already have told you it wasn't a theme issue, I tried it on multiple Mate installs, and blue submarine is always the theme I use on Mate.

Changing it in preferences set it to white, which was what made me think it was a default set in 9.0.4.rc2. I had been reading through the bug db earlier, and had seen a suggestion by Hermann that I thought had been acted upon involving the code editor, black backgrounds, and blending. However, as you read in the bug, this wasn't the case.

I haven't seen it on any other desktop installs, I suppose it could have been a one off thing, but it was certainly weird.

by FourthWorld
Definitely weird. My theme query was just grasping, at least ruling that out as we explore this further.

If this is reproducible, it's mystifying now but the underlying cause can be found. I wonder how defaults for those values are determined, whether if unset they use field properties or have that value set from a prefs pre-populated.

by bogs
Well, reproducing it is another question heh. So far, I've only seen it that once, and currently antiX's server is down

However, I finished the editing of the tips stack, text in the fields, and button code. Just waiting on a reply from Jeanne, and still trying to find contact information for Alan at this point. I did find out he was a director for Lc (now resigned), but of the millions of names that come up with his spelling, I haven't found one mentioning it.

by bogs
Ok, I think it is now ready for the first round of testing, and since I can only run up to 7.x reliably on my 'nix distro, I'll be looking for some victims....er, I mean, "volunteers"

to drop it into their plugins folder and give it a run in the newer versions of Lc.

I really don't think there will be any issues, but *if* you encounter one, please report it to me, as this is supposed to benefit new people, not make them cringe

To test, you can either :
* open it from the open stack menu, or
* drop it into your livecode plugins folder.

*Edit - for the uninitiated, the plugins folder should be in your my_livecode folder. If you don't see it there, create a folder 'Plugins' (spelling counts), and then put it inside that folder. 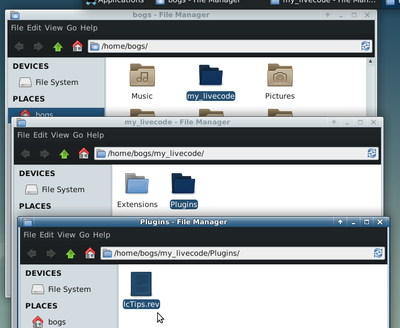 I hope you enjoy it

by bogs
Thank you for testing it David

Alan and Jeanne did a real nice job on the stack, I know I learned a lot from it. There will be several updates to it coming up, such as re-introducing the pop up on keywords and such, just looking for ways to work around the changes in reference materials over the years.

by bogs
I spent this morning correcting a few of the entries, setting the code examples to colored versions, and fixing the 'reshape' entry that Craig pointed out (thanks Craig!

) along with some others that applied only to earlier versions as far as I can tell.

works here so far w/o a problem.
just noticed that the entries in the tip menu are longer than the width of the button. see 1 in screenshot

As current LC versions do not support old Mac OS anymore, maybe the reference could be removed. see 2 in screenshot 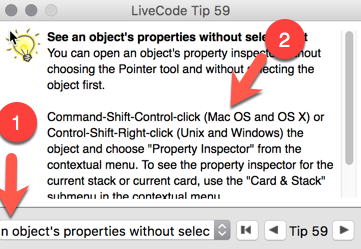 by bogs
Thank you for testing it, Matthias

I had noticed that a few entries were still longer than the buttons width even though I made the button a lot wider. Originally, the button merely indicated the frequency the tips should open, but I think that is better handled by the plugins menu, so am trying to think of a good way to handle it. I am no UX guy though, so my solutions were all pretty basic. Maybe I should open a poll heh.

What I was thinking was one of four things,
* Shorten every cards name to 3 or 4 words
* Increase the height of the button for really long card names
* Shrink the text to fit
* Put the words into a tooltip

Of the 3, I think I am going to go with 1 unless someone has a better way to handle it. 2 still leaves me with the problem that it doesn't fit in the list either (I could solve that by putting it on 2 lines, but then it would be half in the button

), 3 (in a couple of cases) makes the text REALLY small, and 4 looks too kludgy even for me.

If you (or anyone else) has some thoughts about it, would sure like to hear about them

On the Mac OS/OSX wording, I plan to just reduce it to 'Mac', which I think is more consistent.

by bogs
Ok, so here is what I came up with for the option menu. The 'text' is the full name of the card it goes to. When you click on something, or arrow key to go to a card, if the text is longer than the width of the button, it gets truncated and appended with 3 ..., like the picture below. 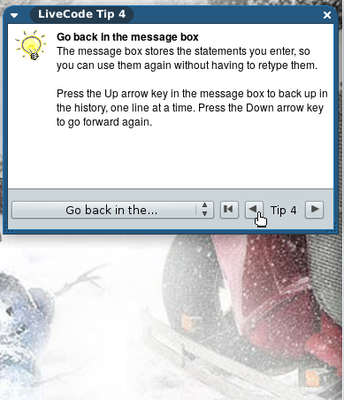 by SparkOut
Haven't seen the real thing yet but the screenshots look good and this latest is an improvement.

Ok, I think I've gotten everything brought up so far resolved, thanks to all those who have given me some feedback to work with.

Here is the latest update -

by bogs
Ok, I'm running into another problem where I don't seem to comprehend the stack modes correctly.

I am going to be adding the ability to add your own tips to the tips stack if you want to. I've worked out the way to get the information and all that part of it, but am having some confusion over the 'defaultStack'. When clicking the "New Tip" button, I want to find out the current defaultStack before setting the "testOne" stack to the defaultStack to create the card, then switch the defaultStack back to what it was before the routine ran.

testOne is set to modeless when it opens. "myStack" is just a regular topLevel stack. When I select 'testOne' and type "put the defaultStack" into the messagebox, it says 'myStack', which is what I would expect.

However, when I am looking at the debugger output, it says the defaultStack is "testOne", even though at this point 'testOne' is still modeless.

I'm having a bit of a problem figuring out why the messagebox and the debugger aren't in agreement about which is the default stack? 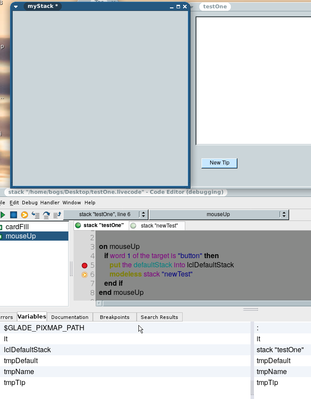 It is deFault of my insanity!

I'm beginning to suspect it somehow doesn't matter and that the create card would happen without detriment in 'testOne', but I'd rather be sure I know what is
supposed to happen and
why, if possible

Thanks for any clues.

by bogs
This has come far enough along to be uploaded, so I've placed it on LiveCode Share.

I guess the default stack question might be too obscure for answer, heh

by bogs
I've finished the update that allows you to add your own tips to the stacks and uploaded it to LiveCode Share. 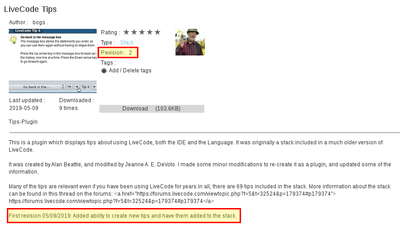 With new and improved ..erm... improvability...

As always, let me know if you find any issues, I've been testing it, but that is a pretty small pool of testers