And should I care?

I am NOT very good with Windows.

Its web site claims it is, and enough tech sites mention it that I'm inclined to agree.

XP is too old to be safe, so tuning it will be of no value.

You know my recommendation for systems abandoned by the vendor of the OS that shipped with it: Linux!

1. I have a friend who is fixated on her machine, and, being a lawyer, needs to run this:

which is a Windows-only thing [Most Bulgarian lawyers run it on their pirated copies of Windows!].

2. She is 100% inflexible and is not prepared to make the effort to upgrade her
hardware and her software as it would involve a cognitive price.

This is "as it is", and I am not going to "come the prophet" with her.
Top

As a windows user I have user Hirens Boot CD before and as far as I know it is legal (Latest version is based on Windows PE).
https://www.hirensbootcd.org/
https://docs.microsoft.com/en-us/window ... inpe-intro

Windows PE is not a general-purpose operating system. It may not be used for any purpose other than deployment and recovery.

There are many free software product for defrag. E.g. see link below (Is also for XP but i never used this one).
https://www.auslogics.com/en/software/disk-defrag/

ALWAYS make a backup before you do anything!!! Not only in case of a crash but also in case of malware and have virus protection. Scan the PC after installing any new software.

Thanks, Paul, for that useful information.
Top

Happy to have been of service...

If PC is to slow for virus scanning try and use a portable app on a memorystick.
https://portableapps.com/apps/security

Here you will also find a defrag tool...
https://portableapps.com/apps/utilities

So if you do not want to use Hirens this is also worth a try.

In the end I, luckily enough, had very little "fun":

3. Convinced her that a modest investment towards a "new-fer-you" (3 year old) machine
and a Windows licence might not be a bad idea. This, theoretically, to happen at the end
of April in a holiday we all have then.

4. The most important thing is that she has not had the machine connected to the internet for 10 years!
Top

Ik money is the problem, buying a refurbished Windows 10 PC/Laptop is often an interesting option.
Top

The lawyer NEVER connected her XP machine to the internet because, apparently
(although I have no memory of this) I told her that the best way to get in trouble
with all her legal files and so on was to connect that machine to the internet
so our "friends" in R*ss*a could steal everything and hold her to ransom.

She, however, connected to the internet via another computer.
Top

Kudos for the heroic attempt to extend the service life of hardware. The more we repair rather than replace, we slow the rate at which we need new landfills, while preserving raw materials for future generations.
Richard Gaskin
Community volunteer LiveCode Community Liaison
LiveCode development, training, and consulting services: Fourth World Systems: http://FourthWorld.com
LiveCode User Group on Facebook : http://FaceBook.com/groups/LiveCodeUsers/
Top

attempt to extend the service life of hardware

after that lady has finished with her current hardware (i.e. about the end of April)
she will 'pay' me to set up her "New-fer-you" system by donating it to me, at which
point I'll get it running Xubuntu 32-bit in my school.

At present my computers in my school that run Linux start at 20 years old
and get younger to about 12 years old.

The BBC Micros I also use for teaching programming max out at 38 years old!

Today I was filming kids' instructional videos (they are doing the instructing) using
a 2006 iMac: why not? It works and has groovy Firewire ports for all those iSight
cameras I picked up at $5 a pop.

I am a great fan of Mike Rowe and the Brown Movement:

and, eco-something I'm probably not: but as a child I remember
finding that our garden was largely constructed on top of someone
else's rubbish dump from the 18th century: I got "all excited" about
historical finds to discover that "all" it consisted off was hundreds of
broken clay pipes, broken wine bottles and plates of the plainest type. 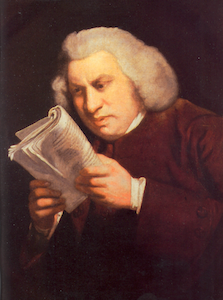 -
Samuel Johnson, the much vaunted writer of the first reasonably coherent
dictionary in the English language was very, very bad at recycling: and
no good at all at toping. When he visited Edinburgh he was invited to supper
by the Judges, who kicked him out of the house where the meal was held,
in disgust that he could not hold 4 bottles of red wine!

Mind you, I suspect it was because of his uncouth and boorish behaviour.

Later he went to visit the Law Courts with his secretary Boswell, and was
met by Lord Monboddo; who, having looked Johnson up and down gave Boswell
a shilling. Forwhy, one might enquire? Well, as Monboddo explained:
that was the usual fee for observing the beasts at the zoo!

What has this got to do with recycling computers? Nothing whatsoever!
And loving it at that!

Bunging usable computers in the ground is:

1. Very selfish towards our descendants.

after that lady has finished with her current hardware (i.e. about the end of April)
she will 'pay' me to set up her "New-fer-you" system by donating it to me, at which
point I'll get it running Xubuntu 32-bit in my school.

Ha! Nicely done.
Er... not quite sure what the future tense of the verb phrase should be here. "Nicely will have been done" doesn't quite get the point across.
PowerDebug http://powerdebug.ahsoftware.net
PowerTools http://www.ahsoftware.net/PowerTools/PowerTools.irev
Top