I've just been trying out TinyIDE and have been having some problems. This is on Windows 7 and using LC 9.5.

When I run TinyIDE, the main IDE menubar is still present, with the TinyIDE one underneath. I'm assuming TinyIDE is meant to replace the regular menubar?

Possibly connected with this duplication, none of the TinyIDE buttons do anything.

There are problems with the display. It stretches out beyond the width of the screen on the right (so some of the buttons are off-screen I think). There's a blank space where the tool icons should be. I can tell they should be there because the tooltips show when I hover over them, and they are functional, i.e. I can click and drag from them onto a stack. But I can't see them.

I do like the idea of doing away with the Tool Palette but as you can see it's not really possible at the moment! Grateful for any suggestions.

You say that none of TinyIDE buttons work. When you downloaded the zip from GitHub did you also put the TinyIDE_Behaviors folder and contents in your plugins folder where revTinyIDE.livecode should be? This is the only reason I can see why buttons would not work.

Let me know how you get on.

by DavidF.
Yes of course! That was it. Failed to read the instructions. Have now copied the behaviours folder to the appropriate place and the buttons all work as they should.

However... buttons in the Tool Bar still disappear from time to time. Also, there are only two of them - Standard Button and Checkbox. Are there meant to be more?

I have seen this on a slower computer where TinyIDE tries to copy the tools before the LC menubar has fully loaded... I need to put an extra check in for this 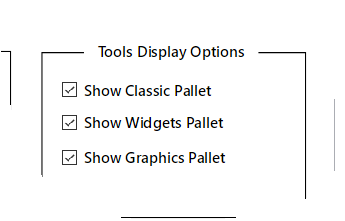 Does this get your tools back?

Also I've noticed a problem with the TinyIDE code peek window so best to deselect in the settings at the moment. Ill have a look at this later today and post when an update is available.

by DavidF.
I tried unchecking all the tool palettes but TinyIDE won't let me: "No tools selected, you must select at least one option." However - just checking and unchecking one of the three palettes (don't think it mattered which one) did produce the desired effect and the tool buttons now appeared. Of course if you don't have say Widgets selected in your regular tools palette, which was the case with me, they won't appear in TinyIDE either even if you check their box. Which makes sense.

And so far this setting seems to stick - I've closed and reopened LC and the tool buttons are still there.

But still some that refuse to appear. The graphics palette only shows the first four buttons, the polygon ones (regular, oval, round, rectangle).

But I can live with that. Certainly I think this will stay now as part of my IDE. Great to have the extra space. One small suggestion. You mentioned Code Peek - I find this incredibly useful. I had made something like this for myself but using the message box to display the code. Yours is a lot smoother! But I think I would like a way of switching it on and off that doesn't involve going into Settings. Basically so that it could be available all the time, but would only come up with some additional action like holding down ctrl/alt/shift etc. Just a thought.

Anyway thanks for your help!

Great to hear all is working for you now.

The 4 graphics palette tools are only the ones selectable at the moment, I thought the others would just require too much scrolling however, I should add them as an option.

A hotkey combination for codepeek is a great idea and I will look into getting it added.

Allan from axsoft has been providing lots of tweaks for the codepeek window, thank you Allan, which I am adding at the moment. I've fixed the codepeek resizing issues locally and should get these pushed to github later today, Ill post when 1.4.1 is ready for download.

one other thing I've just come across... A lot of items in the TinyIDE "Object" and "Text" menus are greyed out, which they are not in the original menu. E.g. Delete card, New card, View Card/Stack script, the Group/Ungroup commands. The keyboard shortcuts still work, e.g. ctrl-N creates a new card, but you can't do it via the menu.

by AndyP
Hi David, yes this is a recent bug which I need to backtrack to find where it first appeared, thanks for pointing it out.
All times are UTC+01:00
Page 1 of 1
Powered by phpBB® Forum Software © phpBB Limited
https://www.phpbb.com/