My buttons are 100x100 pixels. Will your app work with that size?

just tested, yes. The right and left pointing buttons will have a flat angle.
Presently fontsize up to 22, could be more if desired.

you are lucky this week we offer the free app even freeer (is that a word?) 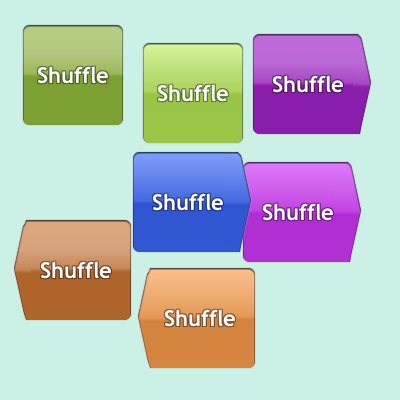 Edit: I copied and pasted one into my app, but I don't see how it is different from a regular button.
Top

Actually, I'm okay with how my buttons look. I just want to get rid of the bug that makes a box appear around them in iOS.

The box only shows up when I press the button, and it doesn't go away.
Top

try to set the borderwidth of the button to 0 and see if that helps.

it is not the borderwidth, I think it is the showFocusBorder.

try in the message box:

and hit the return key.

Then try in the simulator.

Yep. That was it. You rule.
Top

Why did you use this form on the shuffle button

Likewise in the "solvePuzzle" handler. Why this:

Why in the "displayBotButtons" handler, is this necessary?

Finally, how do I change my timers such that beginning with 60 seconds, it will display the elapsed time as minutes:seconds?
Top

Any idea how to speed the bot up? When the current state is very far from the final state (which often is the case when you really randomize the tiles by shuffling them 50 times), it can take a really long time to solve. I want to build a 15-puzzle, but I am concerned that it will take forever for the bot to solve. I don't need it to find the shortest path. I just need it to be as fast as possible.
Top

Why did you use this form on the shuffle button
CODE: SELECT ALL
send "solvePuzzle gWidthPadding, gHeightPadding" to me in 10 milliseconds

when you use send in time like in the first version the handler (in this case the mouseUp handler) finishes first and then send the solvePuzzle comman. This means no pending handler because in the second version 'solvePuzzle' starts right when it is issued and after it is finished it will return to the issueing hander-> the mouseUp handler.

I did not want to leave any handler pending because there was no real need for that: all the mouseUp handler had to do was done. The script is complicated enough and I just wanted to have no pending handler.

Likewise in the "solvePuzzle" handler. Why this:
CODE: SELECT ALL
send "displayBotButtons tParameter" to me in 10 milliseconds

depending on how much is going on at the same time Livecode can not always deliver at the specified time. Suppose some calculation is going on because the human player just made a move. The 'displayBotButtons' will fire when all the running handlers are finished. In this paricular case it may not be necessary but it has become a habit to avoid two messages running the same handler. The easiest scenario is to think of a button that sends a message in say 10 seconds. The user hits the button before the 10 seconds are over. Now you have two messages running that will reach the handler after 10 seconds effectively doubling the times the handler is executed. When testing for the pendingmessages it will avoid that scenario.

Finally, how do I change my timers such that beginning with 60 seconds, it will display the elapsed time as minutes:seconds?

As for speeding up the calculations of the bot: I will have to look into that. I am not too optimistic about making it really fast because there is a lot of calcutations going on.

bn wrote:{snip}For the standard iOS buttons I made a stack that produces images for buttons à la iOS.

THANK YOU! THANK YOU! Your stack is exactly what I needed to make my app's buttons look iOS-correct and consistent.
Top

thank you, that was an early try to avoid the need to go to photoshop.

But have a look at:

it is fantastic. It makes buttons for iOS and a lot more, it actually manages a good deal of designing an iOS app.

Hi, when creating the board for the 8-puzzle game, and before running openStack of which the execution of the code sets up the tiles, each of which denotes a number and the shuffle button, does it have to be assigned to a button, for example "Start Game" of which when activated by a click of a mouse results in the board being created? If this is true, please let me know.

It is pretty well explained and the versions that are discussed/posted here are derivatives of the lesson game.

Did you look at the lesson/original game?

Actually I don't think it is an easy program to understand. The code and the logic is rather advanced. This is not to discourage anybody but this is not an easy/obvious example for a Livecode beginner.