by visanz
I am using Livecode Community 8.1.7 and I have made a standalone program to generate a text string to run an executable in console. This program must run on Linux, Windows XP and Windows Vista. I have made a standalone application for Windows and another for Linux. Both run well in Linux and Windows Vista and 10 in all aspects and functionality.
The case is that in Windows XP it starts correctly but when I click on a button to select a file (that works correctly in others OS) it crashes and a window alert me about "[myNameProgram] for windows has detected a problem and needs to shut down".
I used:
local tArchivo
answer file "Select file"
put it into tArchivo
if there is a file tArchivo then
put tArchivo into field "field1"
end if

I also tried changing in the main stack:

on startup pMode
set the systemFileSelector to false
end startup

and...
on startup pMode
set the systemFileSelector to true
end startup

And several changes not to reasonables but in my desperation I tried everything I could imagine.
In Windows XP "answer folder" runs perfectly. I have tried in XP Home and Professional edition and always I get the crash....
Can anyone help me?
Thanks in advance...

by FourthWorld
In a good scripting language it should not be possible to crash anything. Script errors may happen, but a crash is the engine's job to prevent.

I stopped using XP after Microsoft EOL'd it, so I'm unable to confirm the recipe. But if your recipe is consistent and your system reasonably stock this may merit a bug report.

Surprisingly, the Release Notes for LC v8.1.7 still list XP as a supported platform, so you should be able to file a bug report on that and hopefully the team will be able to address it quickly:
http://quality.livecode.com/

by bogs
I don't run XP except for testing in a vm. I found this intriguing enough to go ahead and test it myself, and it certainly looks like a bug to me. I used the same answer code in both 6.5.2 and 8.1.6 which is apparently also having this issue.

After making the standalone in both, I moved them to the winXp vm I use for testing. The 6.5.2 vers. had no issue, as you might expect. This is what was seen with the 8.1.6 standalone - 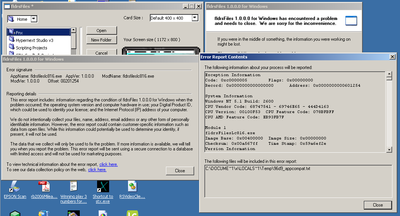 While this test is hardly conclusive, and I don't at the moment have an actual "XP" box up and running, it certainly does seem to be worth filing a bug report and having it looked into.

Just for completness, I'm adding the report XP generated (minus the matching file name baloney which were mainly other programming environment files, and the epson printer driver).

Hopefully that will help out a bit.

*Edit - I should also note that I did not set the systemFileSelector property to false as part of this test.

by FourthWorld
Good sleuthing, Bogs. Thanks for that. I'd guess what happened was the newer APIs they've been adopting has caused them to overlook some deprecated API unique to the much older XP. Given that it's been three years since patches for that OS were released by anyone other than organized crime rings, it may be time to let support for it go soon.

But for now it's listed as supported, so hopefully the OP will post the bug report so we can see if they'll be able to fork that bit of code for XP's sake.

by bogs
Yah, I hope he does, while I can read reports, apparently I can't post one or comment in them heh heh. I have no idea what password they are looking for, I tried both my login to the home planet and this forum with no go.

bogs wrote: ↑
Sun Dec 03, 2017 7:33 pm
Yah, I hope he does, while I can read reports, apparently I can't post one or comment in them heh heh. I have no idea what password they are looking for, I tried both my login to the home planet and this forum with no go.

It requires its own account, you'll need to open one.

by bogs
Well, that is good to know too. Not that I'm likely to find too many bugs that aren't well known or incredibly old

can reproduce this problem. Made a small stack (attached), with only a few lines of code in a single button: 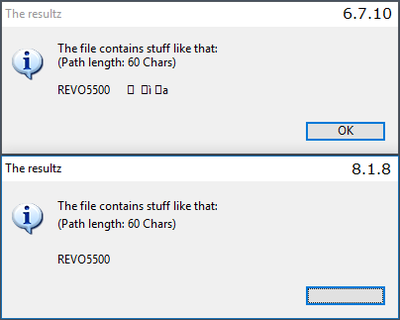 Hope I could help! Have fun!

I sure wish I could turn a phrase like that one