Bringing your stacks to the web

IDC suggests that the future isn't desktops, or mobile, or wearables, or any single form factor, but the variety of all of them, each serving their own unique role, tied together with the cloud:
https://en.m.wikipedia.org/wiki/Third_platform
Richard Gaskin
Community volunteer LiveCode Community Liaison
LiveCode development, training, and consulting services: Fourth World Systems: http://FourthWorld.com
LiveCode User Group on Facebook : http://FaceBook.com/groups/LiveCodeUsers/
Top

@bogs Your points are well taken and it's true I've been targeting a specific market. In that market there are some students who won't use software if they can't carry it around with them.

I do disagree with your comments about hacking though. A desktop computer is as vulnerable to hacking as any other device. Even if you never purchase anything online or visit sketchy web sites, there are router attacks and IoT vulnerabilities that can do plenty of damage. Hacking isn't dependent on the device you use.

But in the long run I think Richard nailed it. The right tool for the right job. I'm keeping this short because I'm typing on my tablet.

jacque wrote: ↑
Tue Jul 14, 2020 5:21 pm
I do disagree with your comments about hacking though. A desktop computer is as vulnerable to hacking as any other device. Even if you never purchase anything online or visit sketchy web sites, there are router attacks and IoT vulnerabilities that can do plenty of damage. Hacking isn't dependent on the device you use.

What can be gained by hacking very much *is* a result of the target. Prior the the cloud I used as an example, as I'm sure your aware, most companies had servers on site and used an intranet to access data. It was far more problematical to breach a server onsite that had no connection off site (it could be done, of course, but you had to be there to do it, you couldn't do it from Rowanda, for instance).

Certain forms of data, such as medical records, credit company information about you, etc. aren't usually lifted from a personal computer or phone or tablet, simply because most people did not store that kind of information on their computers or phones or tablets, although they do access it from those devices NOW, because companies put it where it can be reached from the outside.

Just for a second, though, let us assume you and I kept all that kind of data on our own personal computers, AND we got hacked, AND the bad actors here actually managed to steal all that data from you and I. Looks bad for you and me, Jacque, but not nearly as bad as what happened with Equifax, Home Depot, Walmart, or any other number of very large companies that put all our information off site, and got hacked, causing MILLIONS of people harm.

Sure if you personally get your banking information hacked off your personal computer, that is pretty bad too for you personally. If your banking institution is hacked, though, the bad actors make out much better. If you think I am just worrying about things that can't happen, let me know, I'll start putting actual stories behind these examples of events that have already happened.

If someone breaks my router security, they sure can't bring down the national power grid, or mess with a nuclear facility, OR get the records the NSA is holding on ... well, everyone. Can anyone be hacked? Sure, but it is the scale (and the relative amount of damage that can be done based on that) that makes my view of 'the cloud' so peevish.

Too many people thought there would be no problem using a cloud approach, or thought they could counter any problem that might arise from the same, but as far as I can tell, they were all wrong. What amazes me most is they keep trying, which to me amounts to a description of insanity.

But in the long run I think Richard nailed it. The right tool for the right job. I'm keeping this short because I'm typing on my tablet.

Heh, or as Red Green says, " any tool can be the right tool!" just before he drives a screw into wood with a mallet. My personal favorite is "Any tool can do a job on you, I've met a lot of tools in my life."

@ Richmond -
You'll have to upgrade to "Unrollable metal measuring tape 2.0" to get it to auto-fill fields

I've never seen anyone able to fill in a field, never mind more than one. How would you know when your done?

Now I've seen people who might use a spade to put a furrow in a field, might that be what you were shooting for?

@Richard -
I am positive the article you linked to is exactly how it is going to go, since that is already pretty much the way it already went, however, I think the cloud is what "Al Sleet, the Hippy Dippy Weatherman" was talking about when he said "Behind every silver lining, THERE is a dark CLOUD!". 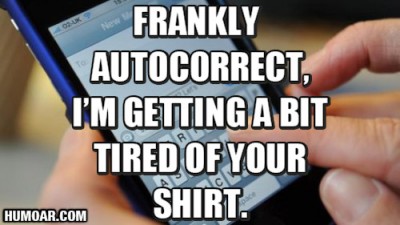