Database with accents and diacritics

TextEncode is merely the name of the function. Its output is dependent on its params. What does your code look like?
Richard Gaskin
Community volunteer LiveCode Community Liaison
LiveCode development, training, and consulting services: Fourth World Systems: http://FourthWorld.com
LiveCode User Group on Facebook : http://FaceBook.com/groups/LiveCodeUsers/
Top

I use XAMPP-VM / PHP 7.2.10 in MacOs. In the control panel from XAMPP there is a tab called "Volumes" with the buttons "Mount", "Unmount" and "Explore", I give Mount and mount the volume on the desktop. I open it, double click on the "etc" folder and modify the "my.cnf" file, that's all. I have not touched anything else, I hope it helps you 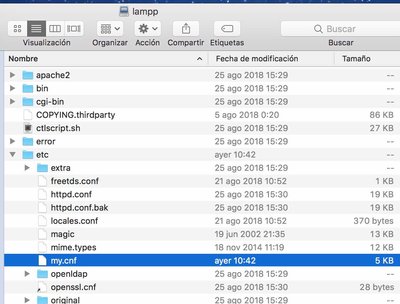 I enclose a screen with the entry from the individual LiveCode fields and the result in the dataGrid. The number 4 is the same entry as 5, before modifying the "my.cnf" file.

Now the idea is to make three applications, one that is connected by ODBC to FileMaker, which was already started and was the only one that did not give me input problems. Another, also started, with SQLite, which had already taken the trick to the accents thanks to "Jaquelin". And the last, which almost forces me to throw in the towel, with MariaDB. SQLite and MariaDB, will be the same replica of the FileMaker original.